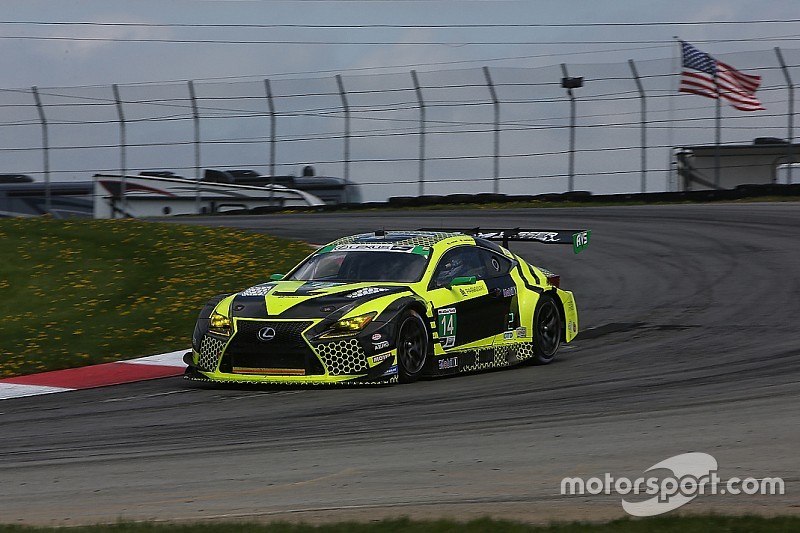 Former IndyCar racer Jack Hawksworth says he was thrilled with the Mid-Ohio victory that lifted he and Richard Heistand to third in the IMSA WeatherTech SportsCar Championship’s GT Daytona points table and was the first triumph for the AIM Vasser Sullivan Lexus team.

Heistand and Hawksworth qualified on pole, and the pair spent the race battling with championship leaders Trent Hindman and Mario Farnbacher in the Meyer Shank Racing Acura NSX, before clinching victory by less than a second.

It was the first triumph for AIM Vasser Sullivan, the team that replaced 3GT Racing as the Lexus RC F entrant last fall, which had scored two wins but not with Hawksworth.

Heistand earned his first-career IMSA pole position on Saturday and led the field from the start but ran slightly wide on one corner on Lap 9, allowing Hindman to slip past.

Hawksworth would drive for two hours of the 2hr40min event, and a late yellow gave him the chance to slip past Farnbacher, who applied heavy pressure in the closing stint but couldn’t provoke the Lexus driver into a significant error.

“This has been an awesome weekend,” said Hawksworth who saw he and Heistand gain second in the championship between Hindman/Farnbacher and the other Lexus drivers, Townsend Bell and Frankie Montecalvo who finished fifth on Sunday.

“After a difficult Sebring, the team bounced back. Richard did a fantastic job in qualifying and gave us an awesome opportunity in the race. Great first stint. And there at the end I got the opportunity to take the lead and did it. The guys were spotless on the pit stops. The Lexus RC F GT3 was working perfect all race long.

“It was awesome. I was proud of our team last year when they won with the Lexus here. I’ve had some great times in the [car] over the last three years and it’s been a pleasure to work alongside Lexus and drive for these great teams.

“I’ve had a lot of fast laps and fast cars, but it never quite happened. This weekend, it all came together. It was a really well executed weekend. I just hoped we’d get an opportunity at the end.

“We were kind of chipping away at them in that last stint. The gap was about eight or seven seconds and I felt like if I kept pushing, that they may hit traffic and maybe we could make something happen. But, obviously, that yellow was what we really needed and then once I got by him, I wasn’t going to let him go.

“It was tense, and it was interesting, because we were strong at different parts of the track. I knew I was quicker through Turn 1 and I knew the Lexus was working well on the back part of the circuit around Turn 9. I was trying to get a gap on the exit of Turn 1, because I knew he was very strong off Turn 2. They seemed to have good straight-line speed and he [Farnbacher] was good on the brakes into Turn 4 as well.

“It was a good cat-and-mouse really, because we were fast on one part of the circuit and he was fast on the other part. I knew as long as I could get a little bit of a gap through that back section that I was going to be all right.”

Heistand commented: “Just an incredible day. I think it means a lot to everyone. This is the first win for AIM Vasser Sullivan, my first win in a racecar since 2006, Jack’s first win in a while.

“He’s one of the fastest drivers here and probably deserved a win before now. This is the third win for Lexus so just a special day. I think we’re both happy with how we drove. I haven’t done a lot of racing, but I’ve been around long enough to know that these days don’t happen that often and we’re going to enjoy it.”