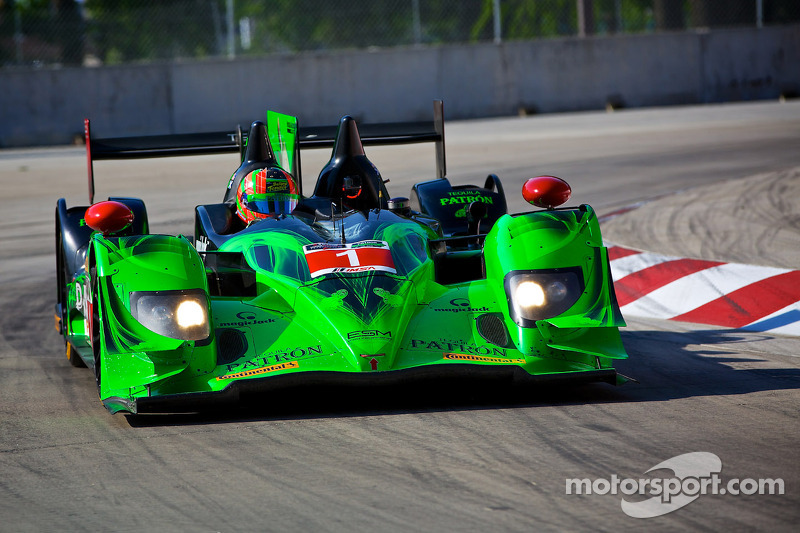 After a promising warmup session this morning for Extreme Speed Motorsports (ESM) with the fastest times posted, the Sahlen’s Six Hours of the Glen race was filled with heartbreak and disappointment. Despite a competitive effort by the Nos. 1 and 2 Tequila Patrón Honda Performance Development teams, any hopes of solid finishes today at Watkins Glen International were dashed by a combination of contact from an overzealous competitor, electrical and mechanical issues.

ESM team co-owner Scott Sharp (in photo) started the race for the No. 1 Tequila Patrón HPD team from the fifth position in the Prototype class. He dropped to seventh in the opening lap shuffle and found a solid and consistent pace for his opening stint. Bad luck hit within the first hour, when Sharp pitted for fuel on Lap 26, he was charged with a pit lane speeding penalty. He served a drive-through penalty on Lap 29 and found himself in the midst of traffic in the form of the GT Daytona (GTD) class, the slowest class among the four competing today.

Shortly after returning to the field, Sharp was hit by an overly aggressive GTD car in the left rear. Sharp was forced to pit on Lap 34 for the team to inspect the prototype and find a broken brake duct. The team removed the damaged piece, assessed the rest of the damage and repaired what they could before sending Sharp back on track. While in the pits, he went a lap down on the field and dropped to 10th place.

Sharp improved his position and reached the sixth place by Lap 60, just in time for the first caution flag of the race. On Lap 62, Sharp pitted and Ryan Dalziel took over for his first stint.

Dalziel fought traffic but was able to move into the fifth position by Lap 75. He continued on his fifth-place run, worked to catch the leaders, hoped to catch a yellow flag and ultimately regain a spot on the lead lap. Without a yellow, Dalziel then pitted for a scheduled stop and driver change.

Sharp returned to the No. 1 machine at Lap 93 for his second stint. As a result of the hit earlier, the No. 1 machine was forced to change tires on each pit stop because of the left rear and possible domino-effect damage. Normally a tire change would be beneficial, but the longer they could run on the tire, the quicker the lap times. Sharp pitted for tires and fuel on Lap 121 and maintained his sixth-place run before the final driver change to Dalziel on Lap 148.

After serving a second drive through penalty for pit lane speeding charged to the No. 1 team, Dalziel kept a sixth-place run. Dalziel pitted again on Lap 156 after experiencing some mechanical issues. The team disassembled and inspected the rear end on pit road since the race car wasn’t shifting or performing as expected. The team diagnosed the problem as a gear selection issue. The gearbox was replaced and Dalziel returned to the field on Lap 177, losing nearly 38 minutes during the repair.

Dalziel completed his stint and race in the 10th position.

Ed Brown, co-driver of the No. 2 Tequila Patrón Honda Performance Development ARX-03b (HPD) started from the seventh position and dropped to 13th in the opening race shuffle. He improved him position to 10th place by Lap 25.

Brown pitted on Lap 27 for the scheduled stop and driver change to Johannes van Overbeek. While entering the pit, Brown was charged with speeding and van Overbeek would serve the drive through penalty on Lap 30.

Van Overbeek began his charge to the front and reached eighth position by Lap 35, then sixth place by Lap 62. On Lap 67, the No. 2 machine stopped in Turn 9 with no power and Van Overbeek had to patiently wait for a tow back to pit lane. While in the pit, the car was not reacting to any command as the team diagnosed the issue and the engine control unit (ECU) was replaced. IMSA officials sent the No. 2 car and crew back to the ESM paddock to complete the repair at Lap 76.

The No. 2 machine was repaired and van Overbeek drove it from the paddock to the pits at Lap 94, nearly 30 laps behind the leaders and 11th in class. Once back in the pits, the team called for a driver change to Anthony Lazzaro.

Lazzaro ran a clean stint from the 11th position until the driver change back to Brown on Lap 152. Brown completed the race for the No. 2 team for the last 40 laps. The No. 2 Tequila Patrón HPD team finished in 11th position.

Next up for Extreme Speed Motorsports is the Mobil 1 SportsCar Grand Prix Presented by Hawk Performance at Canadian Tire Motorsports Park in Bowmanville, Ontario, Canada, on July 11-13.