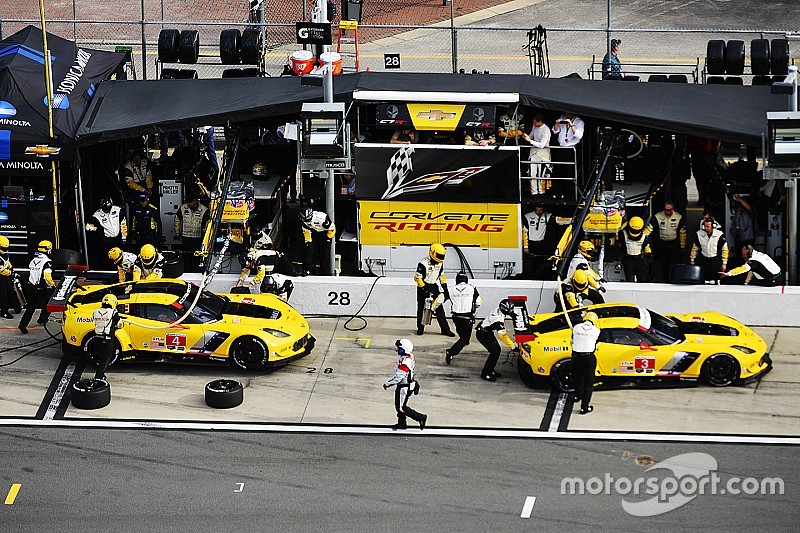 As Pipo Derani pulled away from the Corvette DP hordes, the Corvette Racing C7.Rs looked strong at the top of the GTLM class.

At the start of the hour, Derani’s ESM Racing Ligier-Honda made it past Christian Fittipaldi’s AX Racing #5 to grab the lead, but Fittipaldi was able to hold off the similar machine of Jordan Taylor until he pitted to hand over to Filipe Albuquerque. Taylor has now been replaced by Max Angelelli.

Ryan Dalziel ran fourth in the Visit Florida Corvette and Alex Wurz had taken over the #01 Ganassi Riley-Ford.

Further back, a failed left-rear driveshaft killed the chances of the #31 AX Racing machine. The repaired car rejoined 13 laps down.

Tommy Milner helped aero-push Corvette Racing teammate past Frederic Makowiecki’s Porsche 911 RSR #912 on Daytona’s high banking, and once they were running 1-2 dived past in traffic to put the #4 C7.R in front.

At the end of the hour, Dirk Werner moved the #25 BMW M6 past the Porsche to grab third, while almost simultaneously, the #911 Porsche suffered a left-rear problem, thought to be a driveshaft failure.

In GTD, Andy Lally got the Magnus Racing Audi R8 LMS up front, pursued closely by the Turner Motorsport BMW M6 driven by Jesse Krohn, Wolf Henzler in the Alex Job Racing #23 Porsche and the #98 Aston Martin of Pedro Lamy.

Following stops, however, Shane Van Gisbergen got the #22 Alex Job Racing past the #44 Audi, now driven by Marco Seefried, and into the class lead.

DeltaWing: Three times in P1 position and an unavoidable crash