RRDC president Bobby Rahal presented Haywood with the award at a dinner prior to the running of the Rolex 24 At Daytona, the season opener of the 2014 TUDOR United SportsCar Championship.

DAYTONA BEACH, Fla.- Hurley Haywood, winner of more endurance classics than any other driver in racing history, was honored by the Road Racing Drivers Club with the 2014 Phil Hill Award. RRDC president Bobby Rahal presented Haywood with the award at a dinner prior to the running of the Rolex 24 At Daytona, the season opener of the 2014 TUDOR United SportsCar Championship.

The Phil Hill Award has been presented annually since 1993 to the person who the RRDC feels has rendered outstanding service to road racing. The recipient may be a driver, entrant or outstanding member of a sanctioning body. 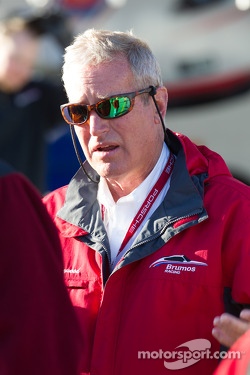 It is named in honor of America’s first Formula 1 World Champion (in 1961), and is not only a tribute to his masterful accomplishments on the race track, it also recognizes his contributions as a great ambassador for the sport. Hill passed away in 2008.

After retiring from full-time driving in 2008, Haywood returned to the Brumos No. 59 Porsche Riley for the Rolex 24 At Daytona, scoring third place in 2009 and fifth in 2011. The next year marked his final run for the 50th Daytona 24. It was also his 40th Rolex 24 start, appropriately ending on the podium with a third-place finish.

He is Vice President of Brumos Porsche in Jacksonville, Fla., and serves as chief driving instructor for the Porsche Sport Driving School and Brumos Driving Experience. He is a member of the Florida Sports Hall of Fame, the Motorsports Hall of Fame of America, the Sebring Hall of Fame and Watkins Glen's "Legends of the Glen."

"Phil Hill represented everything that was great about the American spirit internationally," said Rahal. "He was the first U.S. F1 champion and multi-time winner of LeMans. He was a gentleman in the finest sense of the word.

"What a great champion Hurley is," said Rahal. "He is considered the best endurance champion in North America in the history of the sport. Phil HIll had won many endurance races in his career, and Hurley had a lot of competition in the '70s and '80s, including Porsche 962s, Jaguars, Toyotas, you name it. It was tough. Hurley is indeed a worthy recipient of the Phil Hill Award."

"When Bobby called me up and told me I was going to get the Phil HIll award, I was really shocked," said Haywood. "Any time you could be in the same sentence with Phil HIll is something that is very special to me.

"Phil Hill was an icon in this sport. He won LeMans three times, was a Formula 1 champion. He was just a class act. If all of us mimicked what Phil HIll was all about, we'd all have a wonderful life. So, thank you very much."