Together After 17 Years Daytona, Sebring On Same Schedule.

It’s been a long time – 17 years to be exact – since the Rolex 24 At Daytona and Mobil 1 Twelve Hours of Sebring Fueled by Fresh From Florida have been together on the same schedule.

The Tequila Patrón Endurance Cup rewards the top-performing teams, manufacturers and drivers in the four longest races in the TUDOR Championship, battling for $300,000 in combined bonuses among the four classes.

Together, Daytona and Sebring represent 114 years of competition. The inaugural Twelve Hours was held in 1952 at the former WWII training base known as Hendricks Field.

The first Daytona Continental followed 10 years later, with the three-hour event held on the unique infield circuit nestled inside the mammoth high-banked superspeedway; the race expanded to 24 hours in 1966.

The two races ran approximately one month apart on the FIA World Manufacturers Championship through 1972, then switched to the fledgling IMSA GT Series for a quarter-century. It was this era that saw the rise of the exotic GTP Prototypes and World Sports Cars.

By the late 1990s, a split divided the two series. The 1997 Rolex 24 kicked off the IMSA World Sports Car season, with the name of the sanctioning body changed to Professional Sports Car Racing by the time the series came to Sebring.

For 1998, the Rolex 24 was sanctioned by the U.S. Road Racing Championship, and switched to GRAND-AM Road Racing in 2000. Sebring continued with Professional Sports Car Racing in 1998, and transitioned to the American Le Mans Series presented by Tequila Patrón the following year.

Unification of the ALMS and GRAND-AM’s Rolex Series was announced in September 2012. Now, sports car fans can watch “the best of the best” competing together at Daytona, Sebring and other legendary North American circuits.

Action Express Racing and Porsche North America have momentum on their side as they look forward to Sebring. 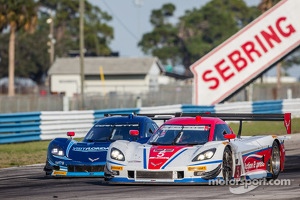 The teams won the respective Prototype (P) and GT Le Mans (GTLM) classes in the season-opening Rolex 24 At Daytona, and both led their classes in testing at Sebring, in preparation for the second round of both the TUDOR United SportsCar Championship and Tequila Patrón North American Endurance Cup.

Sebastien Bourdais led P competitors at the two-day test last month with a lap of 1 minute, 52.480 seconds (119.701 mph) in the No. 5 Corvette DP. Joining him in the lineup will be Action Express regulars Christian Fittipaldi and Joao Barbosa.

Practice for the Twelve Hours of Sebring gets underway with the first of three sessions at 9:55 a.m. ET on Thursday, March 13, Wrapping up that day’s activities will be night practice from 8-9:30 p.m. ET.

Regarded as arguably the most competitive GT class in all of sports car racing, GT Le Mans (GTLM) at Sebring will be a battle between by Porsche, Chevrolet, SRT, BMW and Ferrari.

Corvette Racing is out to repeat last year’s GT win at Sebring. Winning drivers Oliver Gavin and Tommy Milner return in the new No. 4 Corvette C7.R, and will be joined by co-driver Robin Liddell. Corvette has scored eight Sebring class victories since 2002. 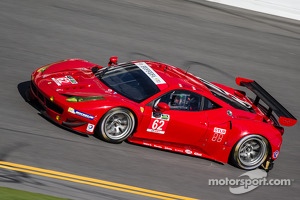 BMW also has a solid record at Sebring. BML Team RLL won in 2012 with a lineup including current team drivers Joey Hand and Dirk Mueller, and also finished 1-2 in 2011.

The Prancing Horse – which last won at Sebring in 2010 – will be represented by single entries from Risi and Krohn Racing. Ferrari last won its class in 2010.

SRT Motorsports returned the Viper to competition midway through the 2012 season, and won at Road America among five podium finishes in 2013. Viper Team ORECA won in GTS at Sebring in 2000, backing up an overall victory in the Rolex 24.

Porsche North America has entered a two-car team in 2014, and ran 1-2 in the recent Sebring winter test. Joining the assault will be Team Falken Tire with a new Porsche 911 RSR. That team finished third at Sebring in 2013.

While the GT Daytona (GTD) class will be racing for the first time at Sebring, Alex Job Racing is going for its third consecutive class victory in the event. 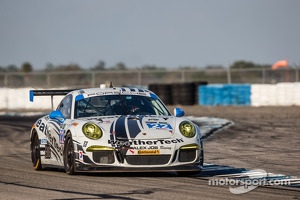 The new GTD category includes teams that formerly raced in either the Rolex Series GT or ALMS GTC classes. AJR won three of the four GTC races at Sebring, including the last two years. Cooper MacNeil, Leh Keen and Philipp Frommenwiler will drive the team’s No. 22 Porsche 911 GT America, with Ian James, Mario Farnbacher and Alex Riberas in the No. 23 of Team Seattle/Alex Job Racing.

Joining Porsche in the 26-car entry for the competitive class are Audi, Ferrari, Aston Martin, SRT Viper and BMW.

Kevin Estre was fastest in the class at the Sebring winter test, with a lap of 2:04.289 (108.328 mph) for Park Place Motorsports. Estre will be joined in the No. 71 Porsche 911 GT America by Patrick Lindsey and Connor De Phillippi.

PR1/Mathiasen Motorsports will be going for its second consecutive Prototype Challenge (PC) victory at Sebring, with Mike Guasch, Frankie Montecalvo and Gunnar Jeannette at the wheel of the No. 52 ORECA FLM09. 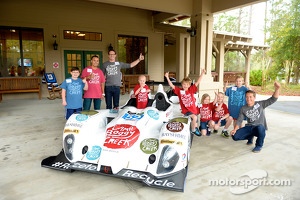 Guasch is a two-time Sebring winner, first taking the checkered flag in 2011 with Genoa Racing.

Jon Bennett and Colin Braun won the Rolex 24 At Daytona for CORE autosport in the No. 54 entry to take the early lead in the TUDOR Championship and Tequila Patrón North American Endurance Cup. Tom Kimber-Smith was fastest of a limited number of PC competitors at the Sebring winter test, running a lap of 1:55.940 (115.781 mph) in the No. 25 8Star Motorsports entry co-driven by Eric Lux and Michael Marsal.

TUDOR Championship team owner Wayne Taylor is part of a prestigious group set for induction as the Class of 2014 into the Sebring Motorsports Hall of Fame.

The presentations will take place on Friday, March 14, at 11:30 a.m. ET at Chateau Elan Hotel and Conference Center.

“I think it’s a fantastic honor to be recognized for my career when I was in the driver’s seat,” said Taylor, a Sebring winner in 1996. “The names up on that [Hall of Fame] board are pretty impressive.”

Elford will also serve as Grand Marshal for the race. He won at Sebring in 1971, in a silver Martini & Rossi Racing Porsche 917K.

Team Falken Tire will run its first race in the TUDOR Championship when Wolf Henzler, Bryan Sellers and Marco Holzer co-drive the No. 17 Porsche 911 RSR at Sebring. The team won its most recent race, taking the GT victory in the 2013 Petit Le Mans powered by Mazda with Henzler, Sellers and Nick Tandy sharing the driving duties.

Jon Fogarty, who drove all of his Rolex Series races for GAINSCO/Bob Stallings Racing, moves to a different Corvette DP at Sebring, as he will share the No. 9 Action Express machine with Burt and Brian Frisselle.

The inductees for the Sebring Hall of Fame will have an autograph session at 3:30 p.m. in the Gallery of Legends building in the paddock. Ten significant cars – including the 1973-winning Porsche 911 RSR of Peter Gregg, Hurley Haywood and Dr. Dave Helmick – will be on display.

The TUDOR Championship drivers will hold an autograph session on Friday from 11:15-noon at the team transporters in the paddock.

Ford, Chevrolet Look To Knock Off BMW In Round 2

BMW was the talk of the Continental Tire SportsCar Challenge after dominating the season-opening BMW Performance 200 at Daytona International Speedway. While BMW teams were near the top of the Grand Sport (GS) charts in recent testing, expect to see solid performances by Ford and Chevrolet teams when the series visits Sebring International Raceway on Friday, March 14.

This will be the first time the Continental Tire Challenge competes on the historic 3.74-mile, 17-turn circuit. The two-hour, 30-minute race will take the green flag at 1 p.m. E.T.

Ford Mustangs posted the first- and third-fastest times in February’s winter test at Sebring, sandwiching the Daytona-winning BMW M3. Andrew Aquilante was fastest overall at the test, running a lap of 2:16.831 in the No. 32 Ford Mustang Boss 302R fielded by his father Joe Aquilante’s Phoenix American Motorsports and co-driven by Kurt Rezzetano. Third fastest, at 2:16.995 (98.377 mph), was the No. 158 Mustang of Multimatic Motorsports/Miller Racing’s Billy Johnson and Ian James.

Daytona winners Shelby Blackstock and Ashley Freiberg were second-fastest at the test with a best lap of 2:16.861 (98.399 mph) in the No. 47 BMW M3 of Fall-Line Motorsports. Fall-Line’s No. 48 BMW of Ken Wilden and Dr. Rod Randall were fourth, while the No. 46 BMW of Trent Hindman and John Edwards were seventh.

After struggling at Daytona in the debut of their new Chevrolet Camaro Z/28.R, Stevenson Motorsports leaped to fifth fastest during the final session of the winter test with the No. 6 Camaro of Andrew Davis and Robin Liddell. The team also fields the No. 9 Camaro for Matt Bell and Andy Lally.

Other GS contenders include the championship-winning No. 13 Porsche 911 of Rum Bum Racing’s Matt Plumb and Nick Longhi, a pair of Nissan 370Zs fielded by Doran Racing, two TRG-AMR Aston Martin Vantages, and the No. 76 Subaru WRX-STI of Compass360 Racing.

David Murry will be calling on his years of winning experience at Sebring International Raceway when he teams with TGM owner Ted Giovanis in the first Continental Tire SportsCar Challenge race at the historic circuit.

The Georgian was a regular when the former IMSA Endurance Championship raced twice annually at Sebring, winning five consecutive races from 1993-95 in the series that evolved to the current Continental Tire Challenge.

BMWs took six of the top eight ST places at the test; however, only one Honda team (LRT Racing) participated, with a number of Mazda, Porsche, Nissan and Honda teams among the 33-car ST entry that have yet to take on the demanding 3.74-mile, 17-turn layout.