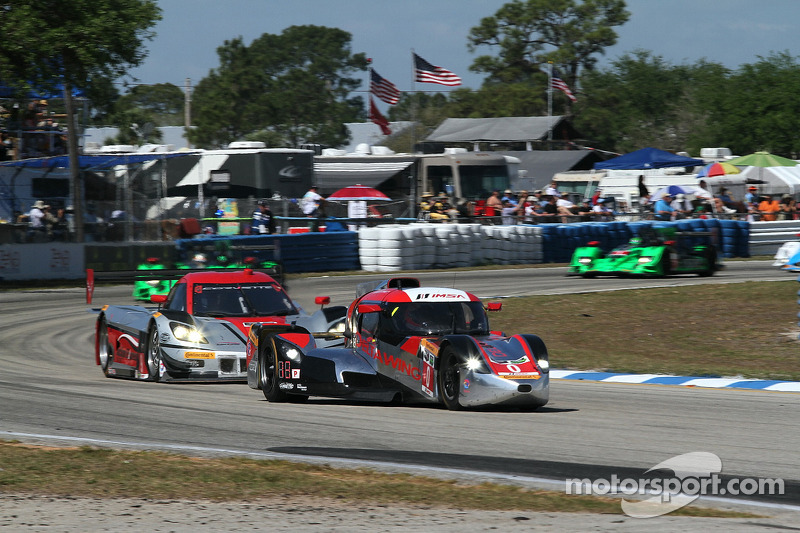 Here are some fast facts regarding the TUDOR United Sports Car Championship as they head to Long Beach. 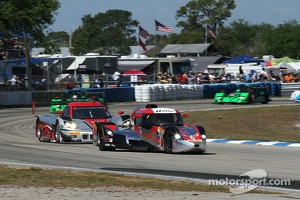 In Long Beach, California this weekend, many of the world’s coolest sports cars will be highly noticeable, and not only on the race track. BMWs … Porsches ... Vipers ... Corvettes … Ferraris — all of those elite marques are every-day eye-candy on the streets of Southern California, truly one of the world’s luxury sports car “hot spots.”

It’s a good mix, with the Long Beach atmosphere. “It feels like you’re in Monaco, but with a California vibe,” said BMW Team RLL driver Bill Auberlen, a Redondo Beach native who leads the GTLM championship standings.

Auberlen drives the No. 55 BMW Z4 GTE. He drives it fast. SoCal fans can relate. Sports cars, says Auberlen, “that’s the L.A. scene. That’s where they ‘live’ and for BMW, Southern California is a huge market. Long Beach … it’s pretty much the crown jewel of our sprint races. It’s so great it’s on the schedule. Such a great party scene.”

“The finest sports coupes on Earth may have been built in Maranello, Coventry and Stuttgart, but they were purchased and driven here,” said Terry Karges, executive director at the Petersen Automotive Museum in Los Angeles. The museum will host an international sports car exhibit beginning Thursday (running through Sept. 30); TUDOR Championship driver and Hollywood star Patrick Dempsey will serve as one of the exhibit’s guest curators, as will AC/DC lead singer Brian Johnson, who raced in the Rolex 24 At Daytona in 2013.

The showroom-to-race-track connection is at the heart of GT racing’s appeal both in the U.S. and worldwide. This weekend will facilitate that connection in a high-end manner. GTLM cars can reach speeds of approximately 180 mph. And that sounds just about right in SoCal, where going fast is a way of life. 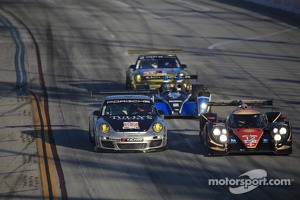 The Long Beach Grand Prix weekend, a long-running early-season staple of the IndyCar Series — it originally was a Formula 5000 event — was a natural addition to the first-ever TUDOR Championship season, with direct historical links to both the GRAND-AM Rolex Series and the American Le Mans Series presented by Tequila Patrón, which merged prior to this season. The Rolex Series raced at Long Beach in 2006; the ALMS had Long Beach on its schedule from 2007-2013.

Long Beach is the longest-running street circuit race in North America, dating to 1975. And there actually is a third link to the International Motor Sports Association-sanctioned TUDOR Championship. In 1980 and ’81, IMSA’s legendary Camel GT Series came to Long Beach with its GTO and GTU classes. And here’s one for the archives: the 1990 winner in GTO was Dorsey Schroeder, now a popular member of the FOX Sports 1 team broadcasting TUDOR Championship races. Saturday’s combined Prototype-GTLM race will be broadcast live (6 p.m. ET).

One of the true beauties of the ALMS-Rolex Series merger is it allows drivers from those two former series a chance to win major races they previously weren’t part of; that’s the excitement for No. 01 Ford EcoBoost/Riley DP drivers Scott Pruett and Memo Rojas this weekend, at Long Beach. They were the dominant team for years in the Rolex Series, driving for Chip Ganassi Racing. Saturday they’ll race together for the first time in Long Beach.

Pruett and Rojas are part of an 11-team entry list for the TUDOR Championship’s Prototype class, a field that includes one of last year’s ALMS P2 class winners at Long Beach, Scott Sharp, who will co-drive the No. 1 Tequila Patrón Honda/HPD-ARX-03b with Ryan Dalziel for the Extreme Speed Motorsports team.

Dalziel raced in both the ALMS and the Rolex Series and was considered perhaps the fastest driver, outright, in the latter. Sharp and Dalziel finished second at Sebring, teamed with David Brabham with Dalziel turning the 12-hour event’s fastest lap. 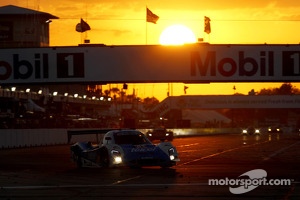 Bill Auberlen and Scott Pruett are part of a solid contingent of California drivers who will race in the Tequila Patrón Sports Car Showcase. Auberlen is from Redondo Beach, Pruett from Auburn.

The group of Californians includes one of the most popular drivers in all of American motorsports, Boris Said, a New York native mow living in Escondido, who will co-drive the Corvette DP of Marsh Racing with Eric Curran.

Following is a rundown of the other five Californians entered, for Saturday’s race, starting with two competing in the Prototype class: · Johannes van Overbeek of Oakland, co-driving the No. 2 Extreme Speed Motorsports Honda HPD ARX-03b with team owner and Patrón Spirits Company president and CEO Ed Brown; · In the No. 07 SpeedSource Mazda, Joel Miller of Hesperia, co-driving with Tristan Nunez. And joining Auberlen (who will co-drive with Andy Priaulx) in the GT Le Mans class: · In the No. 93 SRT Viper GTS-R of SRT Motorsports, Jonathan Bomarito of Monterey — site of next month’s TUDOR Championship event at historic Mazda Raceway Laguna Seca. Bomarito will co-drive with Kuno Wittmer; · In the No. 912 Porsche 911 RSR fielded by the Porsche North America

Dane Cameron will make his debut in the TUDOR Championship GT Le Mans (GTLM) class at Long Beach, as a late addition to Rizi Competizione.

Cameron will co-drive the No. 62 Ferrari F458 Italia with Giancarlo Fisichella. The 25-year-old native of Glen Allen, Calif., shook down the car last week at Texas World Speedway near the Risi shop in Houston. The Ferrari team is off to a rough start, with the team’s primary car virtually destroyed in the season-opening Rolex 24 At Daytona. The team brought a newly rebuilt car to Sebring, only to have it badly damaged in an incident.

“The red No. 62 Ferrari is such an iconic car, one that every driver dreams of an opportunity to race,” Cameron said. “It will be very cool to share a car with Giancarlo Fisichella and learn from his experience in the F458 Italia. I can’t thank Mr. Risi and his team enough for having the confidence to bring me into the team at the last minute.” Cameron has been racing for Turner Motorsport in the GT Daytona (GTD) class this season. He won the class pole and set the fastest race lap at Sebring in the No. 94 BMW Z4 he regularly co-drives with Paul Dalla Lana. He also co-drives a Nissan 370Z with Tim Bell in the Continental Tire SportsCar Challenge 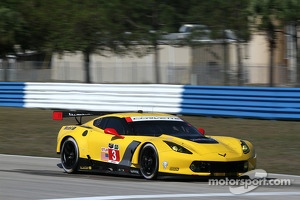 Still seeking its first podium finish with the new Corvette C7.R that debuted this season, Corvette Racing returns to the friendly confines of Long Beach. Given the Chevrolet team’s past history in the event, the goal of taking the top step on the victory lane rostrum is very realistic.

Corvette Racing has won four races in the lead GT category at America’s premier street race. Oliver Gavin and Tommy Milner scored the most recent victory, winning in 2012. The pair returns in the No. 4 Corvette C7.R, and will be joined by teammates Jan Magnussen and Antonio Garcia in the No. 3 Corvette C7.R.

Milner is a three-time Long Beach winner, joining Olivier Beretta in 2007 and 2009. Magnussen led the GT competition in 2008, joined by Johnny O’Connell. Corvette Racing also has posted the fastest race lap in its class each year since 2007.

· Boris Said remembers the good and the bad running in the SCCA Trans-Am Championship at Long Beach. “My earliest memory is crashing out while I was leading the race (in 2001). Then I came back and won in 2003. That was a good one, because I had a good race with Scott Pruett and had to beat him to win. That made it special. Long Beach is the closest race to my hometown. Winning this year would be a longshot, but it would mean a lot.”

· Christian Fittipaldi’s first visit to Long Beach was in 1976, but he best remembers going to Disneyland while his father (Wilson Fittipaldi) worked on the Copersucar-Cosworth driven by his uncle Emerson in the Formula One race. Christian’s dad retired from driving in F1 after the 1975 season in order to field a car for his brother – the 1972 and 1974 World Champion. The five-year-old Christian did make it to Sunday’s race, where Uncle Emerson finished sixth, his best result of the season.

· Extreme Speed Motorsports has momentum on its side in its return to Long Beach. Fresh off a second-place finish in the recent Mobil 1 Twelve Hours of Sebring Fueled by Fresh From Florida, the team scored a 1-2 finish in last year’s Tequila Patrón Sports Car Showcase at Long Beach.

The TUDOR United SportsCar Championship returns to California for Round 4 of the 2014 season, the Continental Tire Monterey Grand Prix Powered by Mazda at Mazda Raceway Laguna Seca in Monterey on Sunday, May 4.

All four TUDOR Championship classes will be in action on the scenic 11-turn, 2.238-mile road course. The Prototype Challenge (PC) and GT Daytona (GTD) classes will hold a two-hour race beginning at 10:15 a.m. PT, followed by the Prototype (P) and GT Le Mans (GTLM) classes at 2:45 p.m.

Both races will be broadcast live on FOX Sports 1, starting at 1 p.m. ET and 5:30 p.m. ET. The weekend also includes a two-and-a-half-hour Continental Tire SportsCar Challenge race on Saturday at 12:45 p.m. PT, along with a race for IMSA’s Porsche GT3 Cup Challenge USA by Yokohama, and the Lamborghini Super Trofeo Series.