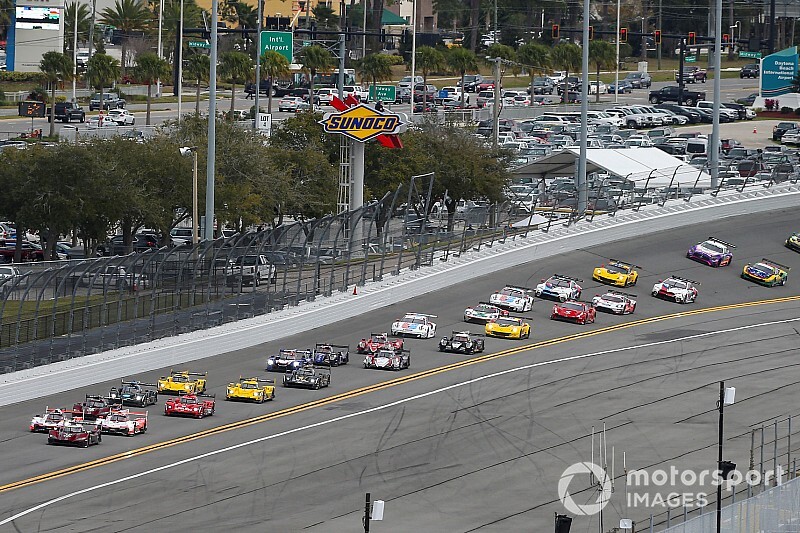 IMSA has moved to explain how it decides the Balance of Performance in the WeatherTech SportsCar Championship, and has revealed a new metric for judging car performance.

There are revised BoP regulations for 2020, introducing more “human oversight” of the IMSA Technical Committee, at the request of the manufacturers participating in the series.

IMSA’s new president John Doonan explained: “IMSA and our OEM partners share the common goal of providing the most competitive form of sports car racing for IMSA fans. The IMSA Balance of Performance process continues to evolve to ensure the core competitive elements of IMSA sports car racing provide the necessary entertainment and value to our audience and stakeholders.

“The IMSA Technical Committee has worked tirelessly on these modifications for 2020 and it should make for close and competitive racing throughout the season.”

An IMSA press release reveals that ITC will introduce a new metric aimed a better representing a car’s overall pace during a stint known as the “Weighted Sorted Sector Lap” (WSSL).

The WSSL uses a larger percentage of a car’s demonstrated performance and will be used to complement the previously used “Weighted Eclectic Lap” (WECL), which mainly focuses around peak performance.

IMSA also will continue to utilize recorded wind tunnel data, engine dyno data and logged car data as a reference to monitor the performance of all cars within each specific class.

Fuel consumption and fuel flow also will continue to be closely monitored to ensure stint-length compatibility, allowing teams to make the difference based on their choices to run full-rich or save fuel during the race.

The specific and unique nature of the 3.56-mile Daytona International Speedway circuit requires a unique approach to BoP for the Roar Before the Rolex 24 on Jan. 3-5 as well as for the Rolex 24 at Daytona on Jan. 23-27.

The starting BoP tables for Daytona released today have been based upon the ITC’s post-race analysis and corrected BoP from the 2019 Rolex 24 at Daytona. Race performance metrics were generated by the best example of each manufacturer’s car in dry conditions. Wet weather performance also was analyzed but did not play a role in the 2020 Daytona BoP.

For the DPi class, performance will remain at the same median class level as the 2019 Rolex 24 at Daytona. In GTLM, the BMW M8 GTE will serve as the baseline performance level due to the introduction of new homologations for the Corvette C8.R and Porsche 911 RSR.

To establish BoP for those new models, a combination of FIA/ACO wind tunnel and dyno-testing data and subsequent IMSA aero and dyno testing validation was used.

In the GTD class, a small, class-wide reduction in lap-time performance will be implemented through reductions in power and mass. The main goal, driven by manufacturer and team feedback, is to address previous top-speed interactions between GTLM and GTD cars. In addition, the reduction in mass for GTD cars is “expected to better align tire degradation over the course of a stint for all cars regardless of mass,” according to the press release.

Starting with BoP for the March 21 Mobil 1 Twelve Hours of Sebring Presented by Advance Auto Parts, the ITC will analyze data from each 2019 WeatherTech Championship event as generated by the best example of each manufacturer’s car. Once the BoP for all 2019 events, excluding Daytona, have been corrected, the ITC will take these track, manufacturer and class-specific values and calculate a season-long average. This calculation, in addition to any other available data, will be used to establish the starting BoP for Sebring.

The need for Balance of Perfomance

The GT Daytona class is the most complicated with 10 different models. The Acura NSX GT3 is a twin-turbo, mid-engined V6; the Ferrari 488 GT3 and McLaren 720S are mid-engine, twin-turbo V8s; the Audi R8 GT3 LMS and Lamborghini Huracán GT3 have normally aspirated mid-mounted V10s; the Aston Martin Vantage GT3 and BMW M6 GT3 run twin-turbocharged V8s in the front; the Mercedes-AMG GT3 and Lexus RC F GT3 are also front-engined but use naturally aspirated V8; the Porsche 911 GT3 R still uses the classic 911 spec of a normally aspirated flat-six engine behind the rear wheels.

LMP2 class does not need BoP – all run 4.2-liter Gibson V8s, and although the class is open to chassis built by four different constructors most will run Oreca 07s. The exception is Rick Ware Racing, slated to use the Riley Mk 30.

The mass, weight distribution and aerodynamic capabilities are then also taken into account. According to the release, for the DPi and GTLM classes, IMSA’s goal is to have every car within a performance window of 0.3 percent, meaning the gap between fastest and slowest over a 100-second lap is just 0.3sec. GTD’s window is 0.5 percent/0.5sec.

The aim is to make the outcome of each race come down to “a combination of driver skill, pit crew prowess and race strategy as opposed to one car’s technical superiority over another.”

In the earliest days of BoP, it was based off only timing and data, and so the fastest cars were hit with more mass or a smaller air restrictor to reduce horsepower, while slower cars had mass removed and/or larger restrictors, and in a perfect world, every car met in the middle. Turbocharged cars had boost pressure adjustments made.

However, this didn’t take into account how each car achieves its lap time – to put it simplistically, some cars were faster than their rivals on straightaways and slower through turns, and vice versa, thus circuit layout could very much favor one car over another. And IMSA admits there was the sandbagging problem. “When you combine highly professional race teams and drivers and world class manufacturers, they’re all looking for the slightest BoP advantage they can get. They mastered the art of masking their car’s true performance from a Timing & Scoring perspective long ago.”

Thus independent data loggers were installed on every car and the eight-person IMSA Technical Committee (ITC) was formed to analyze Timing & Scoring results and data from the loggers immediately following each race and produce reports with any recommended adjustments, based on each car model’s observed performance.

BoP tables are published no later than seven days prior to the first day of official on-track activity for each event. As well as the aforementioned potential adjustments, changing rev limits is an option while in the DPi cars’ case, aerodynamic changes can also be made.

Fuel capacity is another tightly controlled variable through BoP to ensure similar stint lengths for each car in a class. In addition, fuel flow restrictors and autonomous pit lane fuel-take sensors are used to measure refueling times and ensure each class’ minimum full-tank refueling time regulation is not violated.