Nick Tandy and Tommy Milner scored their third straight win in the #4 Corvette, while the sister car knocked the GTD-leading Turner BMW off with 10mins to go, handing class triumph to Laurens Vanthoor/Zach Robichon in the Pfaff Motorsports Porsche.

Michelin GT Challenge pole-winner Tommy Milner in the #4 Corvette C8.R maintained his advantage at the start of the race on the damp but drying 17-turn, 3.27-mile Virginia International Raceway – but only until the first corner. On the exit of Turn 1, teammate Jordan Taylor in the yellow #3 ’Vette got on the inside and found traction on a dry strip to easily out-accelerate the gray sister car to move ahead. By Lap 6, they looked unopposed – the WeatherTech Porsche 911 RSR was over half a minute down – and MacNeil pitted on Lap 9 to hand off to Kevin Estre.

Milner, running barely half a second behind, pitted on Lap 15 to hand off to Nick Tandy.

The #3’s first stop didn’t come until Lap 30 and it was a bad one – apparently due to having the rear tires ready but the wrong way around – so that Taylor’s co-driver Antonio Garcia emerged some 25sec behind Tandy. It also left him only 10sec ahead of the charging Estre. These gaps closed up on Lap 42 when the full course yellow flew for a GTD Acura in the tires.

When the pits opened, the trio pitted, and the #3 – having stopped far more recently – needed just a splash of fuel and no new tires, allowing it to jump the #4 into the lead. Tandy could also now expect opposition from Estre’s Porsche…

The green flag came with 66min45sec to go, and Tandy’s initial attack on Garcia allowed Estre to draw alongside the Briton, but found himself run out of road by the #4 Corvette.

It took less than a lap for Estre to remount an attack and this time he outfumbled Tandy and immediately applied the pressure on leader Garcia.

It took until Lap 57 for Estre to slot the Porsche into the lead at Oak Tree Bend, but both of them lost momentum, so that Tandy not only found a way around his teammate, he was also able to elbow Estre onto the grass, so that he moved into the lead and leading a Corvette 1-2.

Once Estre cleaned up his tires, he delivered the fastest lap of the race so far – purple in all three sectors – three-tenths faster than the #3 Vette, and on Lap 61 the Porsche was back up to second but now 2.5sec behind Tandy. That move prompted Garcia to pit for the final time, and this time he did take new tires.

Meanwhile, Estre lost time stumbling and sliding wide as he caught GTD traffic, so that on Lap 62 he was over 7sec in arrears of Tandy with 40mins to go. Three minutes later, Estre was off the road at Turn 11 and gently in the tires. Yet just in case there was a caution, Corvette pulled Tandy in which allowed Estre to briefly take the lead. However, there was no caution, and the WeatherTech Porsche pulled in, IMSA Radio reporting that he was missing his left-hand mirror and had a slightly dented nose. He was now half a minute off leader Tandy, who had a 2sec margin over Garcia, although the #3 car started shaving the deficit in every sector.

But with 10mins to go, Tandy was still around 2sec in front, and Garcia suffered a moment of brain-fade, misjudging a lapping maneuver on the GTD-leading BMW, spinning the pair of them and allowing the sister car an easy third straight IMSA WeatherTech SportsCar Championship win, by 17.8sec. Estre came home 38sec off the lead. 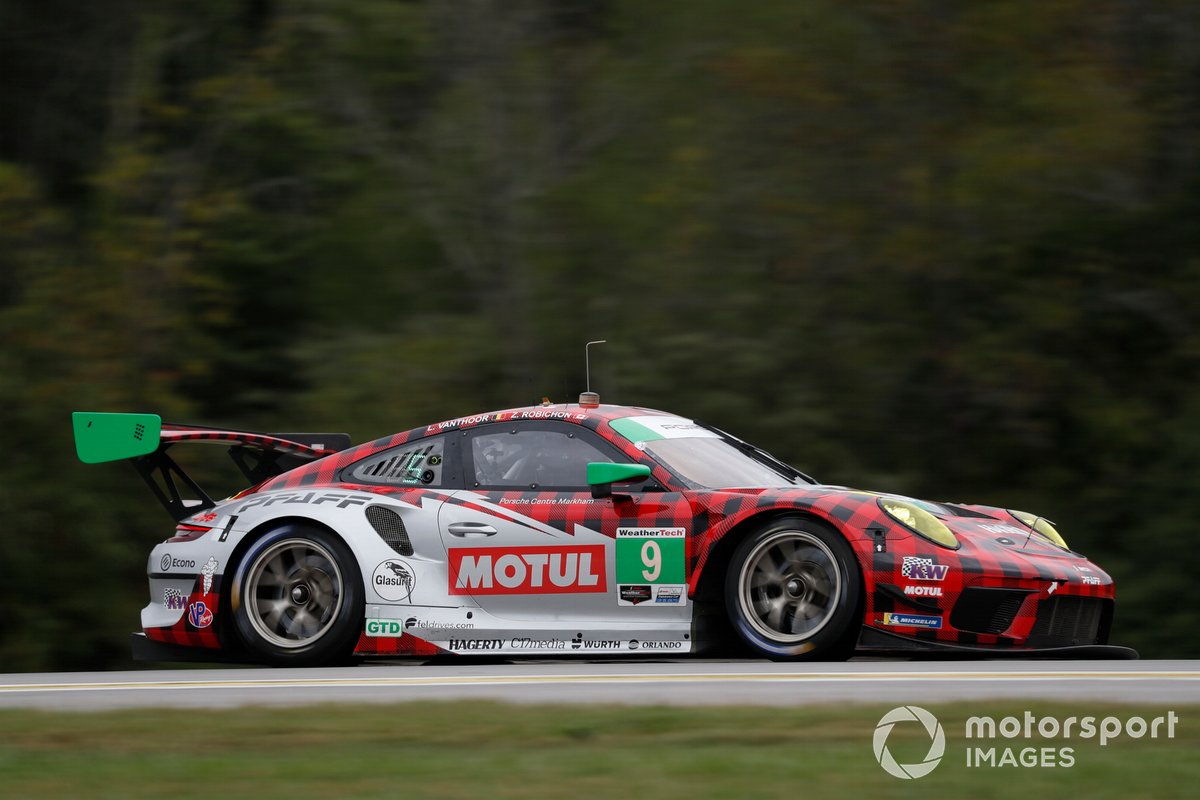 Robby Foley in the Turner Motorsports BMW M6 actually got ahead of the third placed GTLM car, the Porsche of Cooper MacNeil to move well clear of his GTD opposition which was initially led by Madison Snow in the Paul Miller Racing Lamborghini Huracan until Lap 4 when Richard Heistand moved his Carbahn Peregrine Racing Audi R8 ahead and immediately closed down on the leading BMW.

Behind Snow, Aaron Telitz ran fourth in the Vasser Sullivan Racing Lexus, but teammate Frankie Montecalvo dropped the #12 Lexus off the track and sustained enough damage that he was obliged to pit for repairs and lost a lap. Roman De Angelis in the #23 Heart of Racing Aston Martin Vantage ran fifth ahead of Michael De Quesada in the Alegra Motorsports Mercedes AMG GT3.

De Quesada was closely pursued by the two Porsche 911 GT3 Rs, Zacharie Robichon in the Pfaff machine – up from the penalized last spot on the grid! – and Trent Hindman in the Wright Motorsports car.

Foley had withstood Heistand’s challenge at the front of the field and by Lap 12, he had pulled out a 1.5sec gap and in fact Heistand’s main issue was keeping Snow and Telitz behind him.

Robichon managed to get ahead of the twitchy-looking Alegra Benz on Lap 14, and a lap later Hindman too demoted him to eighth. A couple of laps after that, De Angelis made the Aston Martin’s superior straightline speed pay off to grab fourth from the Lexus of Telitz and homed in on the excellent battle for second between Heistand and Snow. The pair of course both run the VW Group’s 5.2-liter V10, but Balance of Performance currently has the Audi running 30kg (66lbs) lighter. So after 26 laps and 45mins, the top four in class were covered by just 1.8sec, with Telitz and running a further 6sec down, with his mirrors full of the Pfaff and Wright Porsches. The 911s both got around the Lexus on Lap 27, when Telitz encountered the obstructive cold-tired Gradient Racing Honda NSX, which had pitted early due to an error by Till Bechtolsheimer, who handed over to Mario Farnbacher.

On Lap 27, Foley pitted from the lead to hand over the Turner BMW to Bill Auberlen, and over the next five laps all the leading GTD runners hit pitroad. But first, the Hardpoint Porsche of Katherine Legge tapped Hindman’s similar Wright car off the road at Turn 1.

Following the stops, Auberlen managed to intimidate Heistand’s co-driver Jeff Westphal off the road, and a couple of laps later the M6 muscled past the class leading PMR Lambo now driven by Bryan Sellers.

Six seconds off the class lead was Laurens Vanthoor in the Pfaff Porsche, ahead of Ross Gunn now in the HoR Aston. Westphal, after his brief trip into the Virginia countryside got around Jack Hawksworth now piloting the #14 Lexus, while Daniel Morad was now steering the Alegra Mercedes in seventh, and Hindman continued in the Wright 911 but down in eighth.

Farnbacher slid off the road, across the grass at Turn 14 and into the tire wall to cause a full-course yellow on the car’s 40th lap, with 1hr26min to go.

Pitstops that followed allowed the Grasser Racing Team’s Lamborghini driven by Franck Perera (co-driver Misha Goikhberg), and Mike Skeen in the Gilbert/Korthoff Motorsports Mercedes AMG GT3 he shares with Guy Cosmo, to move into first and second. Behind them Pfaff vaulted Vanthoor into the ‘net’ lead ahead of Auberlen, Sellers, Westphal, Hawksworth and Gunn.

On the restart, Skeen pitted, allowing Vanthoor a clear run at Perera, while keeping Auberlen behind him. This trio escaped from the battle for fourthbetween Sellers, Hawksworth, Westphal, Gunn and Pat Long, the latter of whom had taken over from Hindman in the yellow-flag pitstops.

Perera pitted on Lap 53, leaving Vanthoor with a mere 0.25sec advantage over Auberlen, and now Sellers was coming back at the pair of them having shaken off Hawksworth. As the final pit window opened, Westphal elected to stop the Carbahn Peregrine Audi for hopefully the final time. Morad in the Alegra Mercedes and Alex Riberas in the #27 HoR Aston did the same two laps later.

Vanthoor’s lead over Auberlen finally crept to 1sec as the GTLM Porsche lapped them both. A further 2.6sec, Sellers pitted the PMR Lamborghini ahead for a short splash of fuel and rear tires ahead, while Long and Gunn also stopped. A lap later, Vanthoor and Hawksworth pitted, leaving Auberlen out front for one lap before the Turner Motorsports team called him in for a fuel-only stop, so that – combined with a long stop for Pfaff – the BMW emerged with a lead of over 8sec. Two seconds behind Vanthoor, was Sellers who had four seconds on Long, while Hawksworth fought with Gunn’s Aston over fifth place.

Auberlen was still four seconds ahead of the charging Vanthoor with 10mins to go when he was knocked into a spin by the #3 GTLM Corvette, as Garcia appeared to clipped the curb on the inside of Turn 1 and bounced into the Turner M6, knocking it into a spin, and giving the BMW right-rear puncture.

The disbelieving Auberlen limped to the pits and rejoined in 12th, while Vanthoor headed to victory.

And the drama wasn’t over, as on the last lap at Turn 1, Hawksworth muscled down the inside of Long to grab third, tapping the Wright Porsche aside to claim the final podium position, nine seconds behind the Sellers/Snow PMR Lambo.

Gunn and Riberas came home fifth and sixth for Heart of Racing, ahead of Westphal and Morad.