The P class will include an intriguing mix of 17 race cars battling for overall victories. The class merges Daytona Prototype (DP) race cars, which previously competed in the GRAND-AM Rolex Sports Car Series, with P2 and DeltaWing prototypes from the American Le Mans Series presented by Tequila Patrón.

The PC class – which utilizes a spec ORECA FLM09 exclusively – will include a dozen entries in 2014. IMSA officials expanded the PC field by two entries after announcing a tentative cap of 10 entries from the class in October.

“Our Prototype class showcases the merger of the ALMS and the Rolex Series with a variety of terrific cars from both series – in addition to a few new entries,” said IMSA President and Chief Operating Officer Scott Atherton. “The Prototype Challenge class, meanwhile, not only will expand from our projection earlier this fall, but will include more cars than we saw at any point in the 2013 ALMS season.” 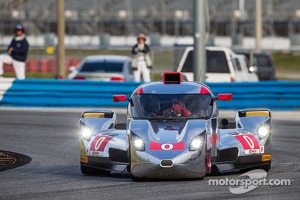 A field of 17 Prototypes is expected at the season-opening Rolex 24 At Daytona, with 12 P cars committed to competing in every TUDOR Championship round. The full-time entries include one DP car each from Action Express Racing, Wayne Taylor Racing, Marsh Racing, Michael Shank Racing, Spirit of Daytona Racing and Chip Ganassi Racing with Felix Sabates. Extreme Speed Motorsports and SpeedSource each will field a pair of LMP2 cars, with one DeltaWing entry and another entry to be announced shortly.

Together with the GT Le Mans (GTLM) and GT Daytona (GTD) entries announced earlier Friday, a total of 68 entries will open the season at the 52nd Rolex 24 At Daytona on Jan. 25-26. It will be the largest Rolex 24 field since 71 cars participated in the 2007 event. A complete breakdown of entries for all four classes follows below.

Hamilton: Pitlane error in Sochi "nothing to do with pressure"

Hamilton: Pitlane error in Sochi "nothing to do with pressure"