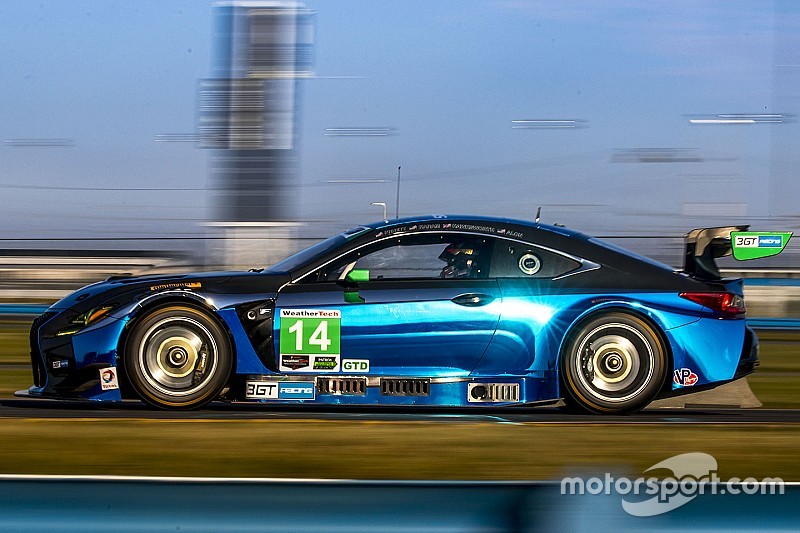 Hawksworth, after three years in IndyCar, is no stranger to either IMSA competition nor the Paul Gentilozzi-run team, having raced part-time for the previous iteration of the Michigan squad, RSR, in the Prototype Challenge class of the WeatherTech SportsCar Championship.

After two days of testing the Lexus on Daytona International Speedway’s road course, he commented: “It’s been a good couple of days. I think we’ve done a lot of laps and the car seems to be very reliable.

“We’re just kind of running through the first things with developing a new car and so far, so good. This is my first season in GT, but I have some experience in this kind of racing – longer duration, sharing a car, multiple driver kind of thing. I’m enjoying it a lot. I like the new challenge.

“I’ve learned a lot and I feel like I’m already acclimatizing very well, so it’s been a pleasure to be involved in it. And obviously to be with such a fantastic company like Lexus is an honor, so I’m hoping we can go out there next year and do those guys proud.”

Karam, who has made 14 IndyCar starts, and scored third at Iowa in 2015, long ago signed up to be sportscar legend Scott Pruett’s co-driver in the Lexus team, said: “Obviously, it’s kind of like a best-of-two-worlds scenario because I’m out there learning the car – this is a new car for me, so the more laps I can do on it, the better it is for me – but then also the more laps I record, it’s better for the team as well.

“We learn more about the car, we learn more about reliability and that’s the big thing in sports car racing, especially endurance racing, so tests like these we want to try and put as many miles on the car as we possibly can and come across those issues now rather than race weekend.”

Former Prototype Challenge star Robert Alon, who will partner Hawksworth, added: “This is very exciting for me. I’ve always been interested in the engineering side of things and watching the program develop from the car to the team to everything is just a really cool learning experience.”

Race program “important for the credibility” of Lexus

Mark Egger, manager of Lexus Motorsports said getting the RC F coupe into GT Daytona category had been vital for the marketing of the sporting F brand of Lexus.

He commented: “We’ve worked very hard over the past year. We’ve signed 3GT Racing and the team signed the drivers and, from a marketing perspective, we’ve worked on TV commercials and consumer activations.
“It’s important for the credibility of our F products that we go racing. The production vehicles take those performance attributes from the racecar and it just makes them that much more credible to say I bought something that I saw on the racetrack.

“Being able to see the car go around the track is just absolutely fantastic. This week we have the first car on the track and the second car will be here for the next test.

“It’s great to not only see the Lexus RC F GT3 on-track, but also the team working together, the engineers learning about it and then seeing the drivers and how excited they are when they get out of the car.”

“We’re learning all about the Lexus RC F GT3 and how it handles over the bumps, the long runs, the short runs and how these new Daytona tires are working out.”

TRG to return to IMSA with Porsche