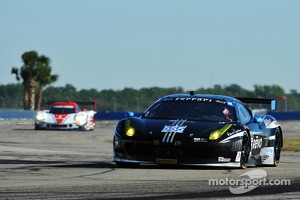 Segal has been loaned by Level 5 to the returning AIM Autosport effort that will field a Ferrari 458 Italia similar to the one he, Sweedler, Bell and Alessandro Pier Guidi drove to a convincing and ultimately redeeming victory in the Rolex 24.

Segal, Sweedler and Bell will be joined this weekend by Italian Ferrari ace Maurizio Mediani, a move that competitively addresses IMSA’s requirement of having a second bronze or silver ranked driver in three or four-driver GTD entries.

“I'm very happy to be able to rejoin Bill and Townsend and also co-drive with Maurizio for Sebring and look forward to what I hope will be a strong performance by this entire group,” Segal said. “First and foremost, I need to thank the Level 5 Motorsports team for allowing me to take this opportunity. I have a great history with the AIM Autosport team and the Ferrari 458 over the past two seasons, and the relationship with Bill and Townsend started in the best possible way with our win at this year's Rolex 24.”

Segal’s and the Level 5 team’s Rolex 24 win was hard-earned on and off the track and now sets the stage for a legitimate shot at pulling off a rare Daytona and Sebring double victory.

“Sebring is among the biggest, most prestigious, and certainly the toughest sports car races in the world, right up there with the Rolex 24 At Daytona and the 24 Hours of Le Mans,” Segal said. “I'm pleased to be able to put a 'check' next to Daytona on that list, and now my focus is very clearly on doing the same thing for Sebring.”

Segal’s addition to the team reunites him with his familiar teammates at AIM Autosport with whom he won the 2012 Rolex Sports Car Series GT championship in a Ferrari 458 Italia. Level 5 shifted focus to other motorsports initiatives in the weeks following the Daytona victory and AIM, which was still in the process of finalizing its 2014 plans, stepped in to field a full-season entry for co-drivers Sweedler and Bell.

While AIM Autosport is the team and entrant for this weekend’s Sebring effort and the remainder of the 2014 IMSA TUDOR United Sports Car season, this weekend’s Ferrari is the sister Level 5 car to the one that won at Daytona. Additional Level 5 personnel have also joined the team at Sebring, which is led by AIM Autosport Technical Manager Ian Willis, who joins Segal as now having winning experience with both teams. Willis engineered Level 5’s winning Daytona effort.

“I think that despite the late start for this effort, we have all of the ingredients that we need in order to be a factor at the front of this race,” Segal said. “We are definitely playing a bit of catchup given that this group in total didn't run together at Daytona, and the competition in the IMSA TUDOR GTD class is really fierce, so it's a big task that we have in front of us.”

Sebring’s annual Winter Test took place less than a month ago when current plans were still unknown. Level 5, Segal and its other team drivers did not participate but head into this weekend’s race with some Ferrari familiarity in their corner.

“Sebring is a very complicated circuit, and the fact that we didn't have the opportunity to test prior to the race will make it even more difficult for us,” Segal said. “Fortunately, we know that the Ferrari is a very versatile car, and exceptionally well balanced by nature, and I think when you combine this with our collective experiences of the past seasons at other circuits, we will be able to get the setup figured out in time for the race.

Both Segal and Mediani, who finished fourth in the Rolex 24 in SMP Racing’s similar Ferrari 458, were confirmed to the entry only late Wednesday afternoon. They will join Sweedler and Bell in the entry that is not only the IMSA TUDOR GTD points leader but the commanding, early-season leaders of the Tequila Patrón North American Endurance Cup.

“It’s good to be back at Sebring and have a chance to run the next race in the new IMSA TUDOR series,” said Segal. “I want to help Bill and Townsend in their season-long championship effort and I would love to have the chance to win the NAEC with them as well.”


- Segal and Willis have been a dynamic duo since the then “GRAND-AM” version of the Ferrari 458 Italia – now in the GTD class – was introduced to North American competition in 2012. They have earned all but one of the 458’s six victories in that time span in addition to the 2012 title.

- The Rolex timepiece Segal earned at Daytona in January was his third. His second came after winning the 2012 title with AIM and Willis in a Ferrari 458, just two years after winning his first GT title and Rolex watch in 2010. Segal is also the 2008 Grand Sport (GS) champion in the series that is now known as the IMSA Continental Tire Sports Car Challenge.