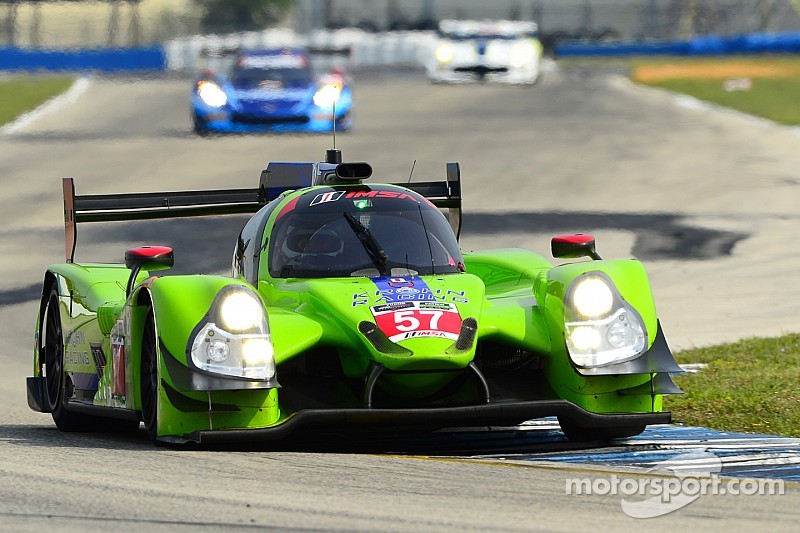 The grid has been set for the 12 hour endurance classic.

Sebring, Fla. - In the spirit of St. Patrick's Day, we have an all-green front row for the 12 hour endurance classic at Sebring. Olivier Pla took pole honors with a record-breaking lap time of 1:51.152.

ESM was the surprise of the session and more specifically, Ryan Dalziel. In their 2014 chassis, he wheeled the No. 1 into P2 with a 1:51.9 but he didn't stop there. On his final lap, he was able to make the Krohn team a little nervous when he ripped another half second out of that in his final lap, clocking in at 1:51.455, three tenths shy of the pole.

The No. 5 Action Express Corvette DP placed third and will start alongside the No. 60 Michael Shank Ligier, whose crew was scrambling when they needed to change the engine after practice. Ozz Negri also had a scary moment during qualifying, taking that No. 60 off track, but he was able to regain control and drive it back onto the circuit. The sister Action Express entry was fifth with Dane Cameron at the helm.

BAR1 Motorsports earned the PC pole for the Rolex 24 in January, and they've done it again here at Sebring. Martin Plowman edged Colin Braun in the CORE Autosport entry by seven 1/100ths.

Porsche showed the way in GTLM in a session many thought would belong to the Corvettes. Frederic Makowiecki was able to secure pole position for the No. 912, setting the fastest time among all GT cars at a 1:58.587. Teammate Patrick Pilet closely followed in the No. 911. It's a good start as Porsche tries to put the blemish that was Daytona behind them.

Speaking of behind them ... That would be Antonio Garcia in the No. 3 Corvette, qualifying third alongside Dirk Werner in the No. 25 BMW Team RLL Z4. The Risi Competizione No. 62 Ferrari filled the final spot inside the top five, driven by Pierre Kaffer.

Note: This is the 13th different GTLM pole-sitter in 13 straight races

There was a bit of redemption in GTD for the Riley Viper. One year ago here, they watched their car go up in flames. Now, that same car which has since been rebuilt is sitting on pole for tomorrow's event. Jeroen Bleekemolen's pole was a close one, finishing the session just a few hundredths clear of Mario Farnbacher and the Alex Job Racing Porsche.

The rest of the top five there was filled by Spencer Pumpelly in the Park Place Motorsports Porsche, Leh Keen in the sister Alex Job Racing Porsche, and the TRG-Aston Martin of James Davison to top it off.

From burning to the ground to the top of the podium, the last Vipers of TUDOR can still bite