Tracy W. Krohn, Nic Jonsson and Andrea Bertolini started 11th on the grid and took advantage of their planned strategy to be in contention for a podium finish.

After a demanding 12 hours on the notoriously tough Sebring International Raceway, Krohn Racing finished the 62nd Annual Mobil 1 Twelve Hours of Sebring in the fourth position in the GT Le Mans (GTLM) class of the IMSA TUDOR United SportsCar Championship.

The No. 57 Krohn Racing Ferrari F458 of team owner/driver Tracy W. Krohn, Nic Jonsson and Andrea Bertolini started 11th on the grid and took advantage of their planned strategy to be in contention for a podium finish. Italian Ferrari ace Andrea Bertolini led eight laps of the 12-hour endurance race under green flag condition in the GTLM class after the ten-hour mark. 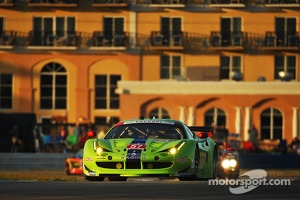 Although Krohn and longtime co-driver Jonsson were not able to celebrate a podium finish, today's event marked their 100th race together. The eleven years sharing the cockpit has given Krohn and Jonsson an understanding of what it takes to be successful in sports car racing, and this year's Twelve Hours of Sebring did not disappoint.

TRACY W. KROHN, Krohn Racing Team Owner/Driver, No. 57 Krohn Racing Ferrari F458 GTLM:
"We put ourselves in a position to be on the podium but we didn't quite get there. Andrea and Nic did a fabulous job, these guys are pros. It's fun to watch them, and they drove just flawless. Everything went very well, the car was really good. We didn't have any issues with it and that's hard to do at Sebring. This is a tough place to race and a tough place to get on the podium no matter what class you're in. It all worked out okay. We started 11th, finished fourth, and almost made the podium, so today was a good day."

NIC JONSSON, Driver, No. 57 Krohn Racing Ferrari F458 GTLM:
"We had a pretty strong car all week even though we qualified in the back. We are the only privateer team in this very competitive class racing against factory cars. The Krohn guys have done a phenomenal job again with preparing the car. Both Tracy and Andrea did an extraordinary job in the car and our team engineer, Hayden, had a great strategy throughout the day, and it shows. A well-prepped car, along with staying out of trouble, is what pays off in these types of races. Sebring is a really rough track; it's very hard physically to drive and also hard on the equipment. If you stay out of trouble and keep your nose clean, I think it shows you can have a good result. If you look at our car, it has no scratches on it and that's the way to finish. Again, thank you so much to the Krohn guys. The 100th race with Tracy was awesome to finish."

ANDREA BERTOLINI, Driver No. 57 Krohn Racing Ferrari F458 GTLM:
"I drove the car for nearly three hours at the end. The team did a really unbelievable job, especially in terms of strategy and pit stops. At the end, the car had good balance, and I think it was on the top for us having a 2012 car. It was really good, and I'm really happy for Tracy and Nic. I tried to do my best, and in the last bit, they asked me to remain in the car. We put new tires on the left side and we achieved a good result. I am so happy, but also disappointed that we were so close. It was a dream for me to finish on the podium with Tracy and Nic, and everyone did their best. It was a really special weekend."

HAYDEN BURVILL, Krohn Racing Engineer:
"The strategy in this kind of racing is always to take advantage of the free passes and that kind of stuff. We worked hard, being in the 2012 car, so we have between seven-tenths and one-second disadvantage on speed. We're always looking for opportunities to recover that, and working through the rules, there are opportunities to make up for that deficit. We managed to do that all day and put ourselves in a position that, at the end of the day, we had a shot. It turned out to only be four cars in the end, and the cars beat us on pace. That was expected, but even to finish fourth in this car, and have beaten many of the factory cars, is incredible. We're a private entry in a GTLM event and to finish fourth, that's pretty admirable. The other way that we were able to be in contention for a podium finish is because we had a trouble-free race. The car finished the race with virtually no damage. The team incurred no penalties, and that's critical to being competitive in these races. The team did a really good job, and it's great to be involved with Krohn Racing."

Next round for the IMSA TUDOR United SportsCar Championship is April 12 on the streets of Long Beach, California for a combined Prototype and GTLM class race.