The Krohn Racing team accomplished their goals during the inaugural qualifying session for the new IMSA TUDOR United SportsCar Championship.

Daytona Beach, Fla., January 23, 2014...Krohn Racing will start the 52nd running of the Rolex 24 At Daytona from the ninth position in the GT Le Mans (GTLM) class after a solid qualifying run by Scotsman Peter Dumbreck.

The Krohn Racing team accomplished their goals during the inaugural qualifying session for the new IMSA TUDOR United SportsCar Championship. Dumbreck, who has never raced at Daytona before, got more comfortable in the No. 57 Ferrari F458. Prior to qualifying, Dumbreck had only completed three laps at the famous Daytona International Speedway, clocking faster times with every single lap. 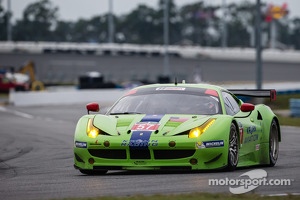 The endurance racing veteran also turned the quickest lap of 2014 for Krohn Racing with a time of 1:46.863 at an average speed of 119.929 mph. With virtually no traffic on course for the GTLM-only qualifying session, the team was able to gather data that will be valuable during this weekend's endurance classic, to get a solid race setup.

TRACY W. KROHN, Krohn Racing Team Owner/Driver, No. 57 Krohn Racing Ferrari F458 GTLM: "The qualifying goal was to get more laps in the car for Peter, as he'd only gotten three prior to that. It's a little unfair to expect a really stellar drive from him, but he did a really good job. He's quicker with every lap he goes out, and we set it up so that we will have a couple changes to the car still. Tomorrow we will do back-to-back testing, so I'm really encouraged. The car felt pretty good when I got in today, and although I was bedding brakes, it was obvious that the car was better than it had been last time we were here, especially in the way it handled in the corners. The car felt better and the times were better, so it must really be better."

PETER DUMBRECK, No. 57 Krohn Racing Ferrari F458 GTLM: "Essentially, when I started that qualifying, it was only my fourth lap of the track, so I wasn't going to be completely up to speed. It's really just me still learning the track. We really just ran out of time at the end, because each lap I was faster and faster. I feel more confident in the car now, and that was the most important thing. We weren't as worried about the qualifying pace as getting me dialed into the car and ready for the race. There was no traffic, so I was able to concentrate on what's ahead and really focus. All in all, I think that's the first step on getting me up to speed on this circuit. We're not a million miles away from everyone else, so it's quite good."

HAYDEN BURVILL, Krohn Racing Engineer: "I think qualifying went as we planned. The way the track time is split up for the weekend, the fact that Peter hadn't been here before meant that it was going to be difficult to get him a very good opportunity to learn the track and learn the car. By letting him qualify, there were only eight other cars on the track, so he got a solid 15 minutes to do whatever he wanted. For us, that was one of our objectives, to get him the seat time, so we were able to use qualifying for that. He was also able to turn the fastest lap that we've done in 2014 in this car, so it turned out to be a very good decision and worked exactly according to plan."

There's strength in the numbers at this year's Rolex 24