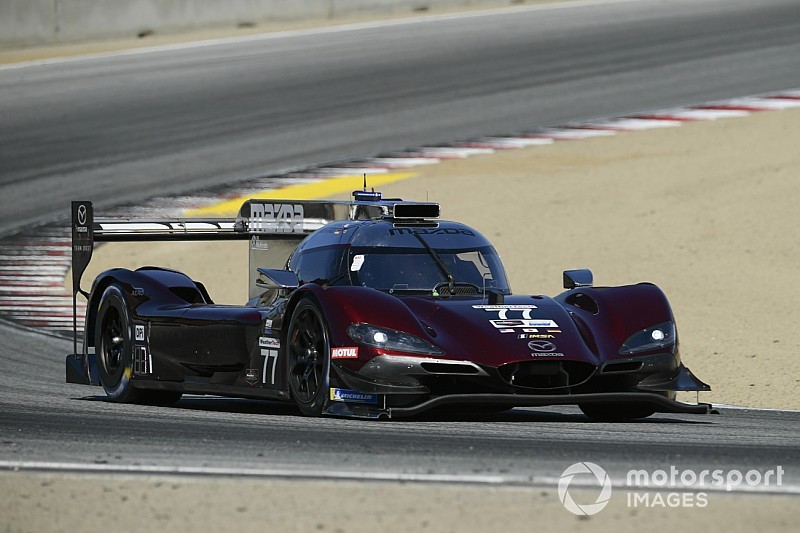 Oliver Jarvis’ Mazda RT24-P led opening practice for the IMSA WeatherTech SportsCar Championship round at Laguna Seca, but recent Balance of Performance changes appear to have boosted the Cadillac DPi-V.Rs closer to the ultimate pace.

However, a similar gap behind the Acura was Filipe Albuquerque in the #5 Action Express Racing Cadillac, followed by the similar cars of Renger van der Zande (Wayne Taylor Racing), Pipo Derani (AXR), Tristan Vautier (JDC-Miller Motorsports) – all within half a second of the top time.

IMSA’s recent BoP changes have come after five races in which the Cadillacs haven’t looked a true match for the Mazdas and Acuras.

Helio Castroneves’ best effort in the second Acura left him around 0.4sec off teammate Montoya, but ahead of Colin Braun’s CORE autosport-run Nissan DPi, Simon Trummer (JDC-Miller Cadillac) and Jonathan Bomarito, who dropped a wheel off the track in the second Mazda and needed some minor repairs.

The big story was the two Porsche 911 RSRs, the GTLM class’s dominant cars this year, were over 1.5sec behind Westbrook’s best effort.

GT Daytona was led by Bryan Sellers in the Paul Miller Racing Lamborghini Huracan GT3, but by mere hundredths ahead of Toni Vilander in the Scuderia Corsa Ferrari 488 GT3.

Aston Martin: IMSA has "moved down the priority list"