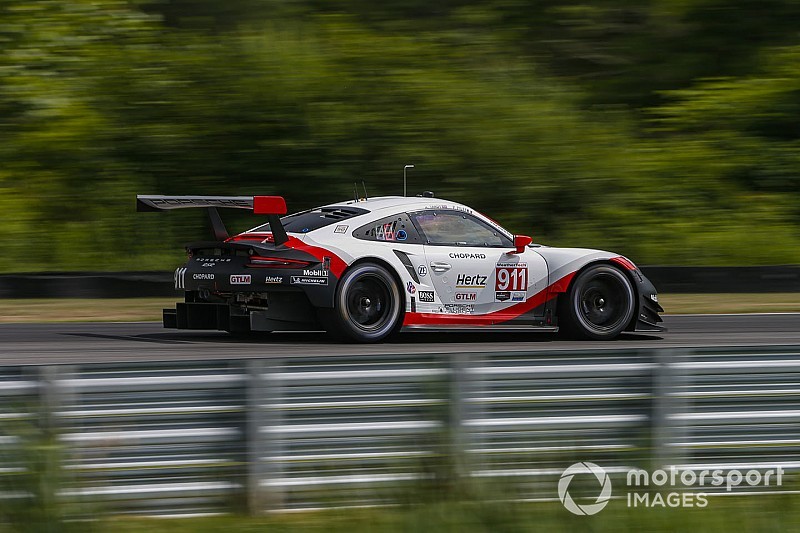 Nick Tandy and Laurens Vanthoor were the only drivers to cut sub-50 second laps around Lime Rock Park track to send the Porsche 911 RSRs to the top of the times in third practice for tomorrow's IMSA WeatherTech SportsCar Championship race.

Vanthoor, championship leader along with Earl Bamber, was the first to turn a 49sec lap, with a 49.938, but Tandy left it until the final minute to grab P1 with a 49.782, following it up with another lap under Vanthoor’s best.

This Porsche domination left Richard Westbrook’s Ford GT more than half a second adrift in third, although for many teams the session was about race-runs and pitstop practice.

Marcel Fassler, standing in for the still injured Tommy Milner, put the #4 Corvette C7.R in a tire barrier that left the car in need of new nose and fenders, but co-driver Oliver Gavin was fourth-fastest ahead of the second Ford of Dirk Muller and Joey Hand.

In GT Daytona, a late improvement by Bryan Sellers – who this weekend shares the Paul Miller Racing Lamborghini Huracan GT3 with Corey Lewis rather than Ryan Hardwick – put the #48 at the top of the times with a 51.797 ahead of Pat Long in the Park Place Motorsports Porsche 911 GT3 R and the Acura NSX GT3 of Meyer Shank Racing’s Mario Farnbacher.