LONG BEACH, Calif. – Jan Magnussen captured the first pole position for the new Chevrolet Corvette C7.R on Friday with the fastest lap in qualifying for Saturday’s Patrón Sports Car Showcase at the Long Beach street circuit. The Dane made his final lap count – a 1:17.939 (90.902 mph) in the No. 3 Corvette that is in its first season in the TUDOR United SportsCar Championship.

It is the first pole position for Corvette Racing since the Baltimore street circuit in 2012. Magnussen was 0.152 seconds quicker than the rest of the GT Le Mans class.

“Jan Magnussen's pole-winning lap in the new Chevrolet Corvette C7.R is a great start to the Long Beach weekend,” said Jim Campbell, Chevrolet U.S. Vice President, Performance Vehicles and Motorsports. "Starting position is important in a short, 100-minute race. The team is now focused on race execution and pit strategy. It's great to have so many Corvette owners here in Long Beach and around the country supporting Corvette's racing efforts in the TUDOR United SportsCar championship." 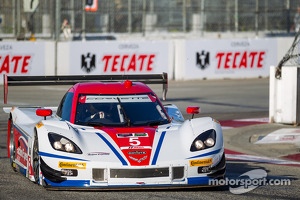 Friday’s pole position was Magnussen’s second at Long Beach. His other came in 2008 in the GT1-spec Corvette C6.R. He also set the fastest race lap in class in 2007 (GT1) and 2011 (GT). Both were in the American Le Mans Series.

“I want to say how happy I am for the team that we got the pole. It’s a new car – the Chevrolet Corvette C7.R. We’ve known all along that it’s a fantastic race car; we just haven’t really been able to prove it yet. In the previous two races, we’ve had a good race car but qualifying has been a little bit tough and reliability hasn’t been 100 percent. Hopefully we have those things behind us and can have a good race from the front row.”

More than any other race this season, the front of the grid is where teams want to be at Long Beach. The 100-minute distance makes this the shortest race on the TUDOR Championship schedule, which makes track position key from the start. It’s a sharp contrast to Corvette Racing’s first two events – the Rolex 24 At Daytona and the Mobil 1 Twelve Hours of Sebring.

Magnussen’s pole is the latest success story for Corvette Racing at Long Beach. The team has four victories at the circuit to its credit including two years ago for Gavin and Milner. A Corvette Racing driver also has set the fastest race lap in class each of the last seven years.

The TUDOR Championship is the result of a merger between the ALMS and GRAND-AM’s Rolex Sports Car Series. Corvette Racing will compete in 11 races around North America plus the 24 Hours of Le Mans.

Christian Fittipaldi led the contingent of Corvette Daytona Prototype drivers in prototype qualifying Friday at Long Beach. The Prototype championship co-leader set the third-fastest time in time trials with a 1:15.571 (93.750 mph). He drives the No. 5 Action Express Racing Corvette DP with Joao Barbosa. Fittipaldi was just 0.246 seconds off pole position.

This is the first race at Long Beach for the Corvette DPs. Ricky Taylor was the next-fastest Corvette DP driver with a fifth-place showing in the No. 10 Wayne Taylor Racing entry at 1:15.743 (93.537 mph). Action Express Racing – winner at the Rolex 24 At Daytona – and Wayne Taylor Racing sit first and second in the Prototype team championship through two rounds.

(His qualifying session) “Qualifying went completely to plan. I went out and found a good gap. I had to back off once to find myself another gap. After that, it was a matter of trying to work every corner and finding a little bit here and there. At one point, we were P3 and I thought ‘I’m 0.8 seconds faster than I have been when we did the qualifying simulation. I don’t know if there is any more to come.’ But I did one more lap and pushed hard. It stuck and I got pole position.”

(History at Long Beach) “The C6.R was a great car. The most important thing is the team, the strategy and our pit stops. It’s one of those races that is just one stop, no doubt about it. These short races can also be a little tricky in terms of what you do with strategy. You can be very aggressive or try to play it safe with a normal strategy. Most of the time we’ve played it safe. Sometimes we’ve lost because of it but we’ve definitely won more because of it.”

TOMMY MILNER, NO. 4 CHEVROLET CORVETTE C7.R "It’s awesome to see Jan on pole. It’s always nice for us to get one of those, so congratulations to him. The car was pretty good. It was a little sloppy in places – just my driving. There were some places where I think I could have gone quicker. But it was a good lap. First and fourth is a great place to start the race. Being at the sharp end of the grid is obviously very important and Long Beach. It’s a good start for the race tomorrow.”

DOUG FEHAN, CORVETTE RACING PROGRAM MANAGER “Congratulations to Jan and the crew of the No. 3 Chevrolet Corvette C7.R on a fantastic qualifying effort. This is a great reward for everyone at Chevrolet, Corvette Racing, Pratt & Miller and GM Powertrain after the hard work they have put in during the early days of this program. Qualifying is extremely important for this race, and it is great to see Jan and Tommy in the front two rows of the most competitive grid in all of GT racing.”

CHRISTIAN FITTIPALDI, NO. 5 ACTION EXPRESS RACING CORVETTE DP "The top-three were very close. I was on the limit and I did a good qualifying lap. There was not a lot more to come out of our car. I think it's pretty obvious that the Fords have a little bit of an advantage on us. They put it all together in qualifying and they're 1-2. Maybe they were holding back a little in practice, but we weren't holding anything back. We had what we had. The Action Express team gave me a very good car for qualifying and I managed to put together a good lap but we were two-tenths-and-a-half shy for one reason or another. Now tomorrow is the race, and tomorrow is when it really counts!"