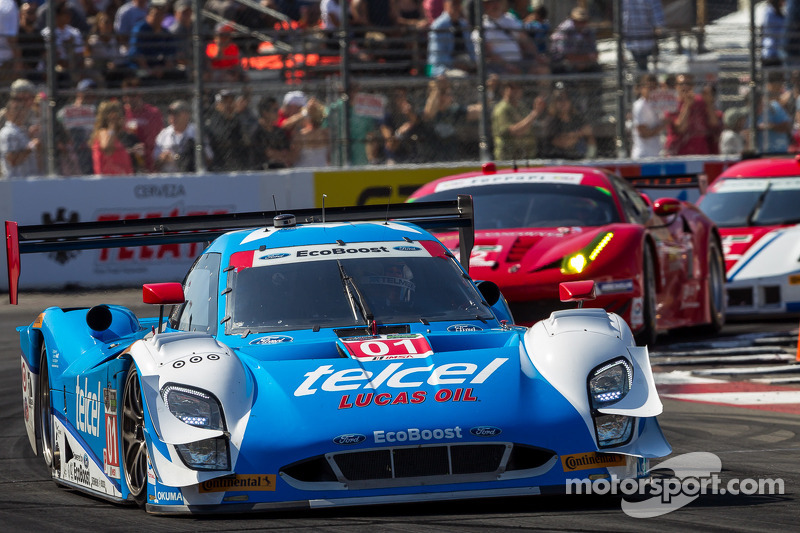 YOU NEVER HAD A LEAD OF MUCH MORE THAN 2 ½ SECONDS FOR THE ENTIRE RACE, YET IT KIND OF LOOKED LIKE YOU WERE CRUISING THE WHOLE TIME. WE KNOW YOU WEREN’T BUT WAS THAT KIND OF THE MODE YOU HAVE TO PUT YOURSELF IN TO KEEP CLICKING THOSE LAPS OFF? “It was, for me, I saw where the 10 car was and we were all running hard. It was just short of a qualifying lap the whole time. You were trying to go as fast as you could, but also hit your marks to be able to keep those times lap after lap after lap after lap. Then with the traffic, sometimes it got jammed up with traffic and he was able to get closer, and sometimes the traffic worked for me. It was close the whole time. When you get 100 minutes like that and no yellows and you can throw a blanket over the top three cars, I think that says a lot about the direction of the TUDOR United SportsCar Championship and what we’re doing and where we’re going.” 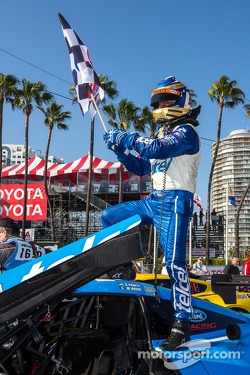 AFTER A ROUGH START IN DAYTONA AND WITH THE TWO SERIES COMING TOGETHER NOW, DO YOU HAVE THE THOUGHT PROCESS THAT YOU HAVE SOMETHING TO PROVE? “It’s business as usual. All the guys that you saw racing here today, our job is to go as fast as you can and try to run up front, and try to make the podium if you can. Short of that, get on the podium. With that, it’s been a huge challenge, because our cars, the Daytona Prototypes, are so much different than what we’ve had in years gone by. We have paddle shift now, we have carbon brakes, we have a whole different downforce package. Big diffusers underneath. For us, this group, it’s been a huge challenge. A huge challenge just getting the car to the race track with all these changes, and all the differences. With that being said, I couldn’t see a more exciting time for road racing as we look to the future. These series had to come together. The future couldn’t be brighter. This is one of those transition years, but if it’s anything like we saw in Daytona and Sebring and now Long Beach, it couldn’t be brighter.”

IN YOUR PRE-GAME PLAN, YOU PROBABLY DIDN’T EXPECT THIS RACE TO GO WITHOUT A YELLOW. HOW DOES THAT AFFECT THE TEAM STRATEGY, SORT OF HAVING TO MAKE THOSE ON THE FLY, AND WHAT YOU GUYS AS DRIVERS HAVE TO DO? “We knew there was a good chance we could go green. I’ve been here for an IndyCar race, and it went green the whole time. I’ve been here for an IndyCar race and it was just littered with yellows. When you looked at each of the sessions, we virtually had zero yellows because of any sort of crashes. A yellow came out because more of a mechanical issue than guys making bad decisions. I think we were prepared either way, to look at a full green race like we saw today or we would’ve changed up our strategy for sure if we were to start seeing yellows, and depending on when those yellows came out. It was a one-stop race, but if the yellow came in 10 laps, we probably would’ve stopped. The way it worked out, there was no decision. You go as far as you could, stopped to fill it up and went to the checkered.”

MEMO ROJAS: AFTER A ROUGH START IN DAYTONA AND WITH THE TWO SERIES COMING TOGETHER NOW, DO YOU HAVE THE THOUGHT PROCESS THAT YOU HAVE SOMETHING TO PROVE? “It’s not a matter of wanting to prove something, we just want to win races. We knew coming up to the merger with the TUDOR United SportsCar Championship and with IMSA there was going to be a lot of challenges and I think we’re still in the middle of that process. It’s obviously going very well and we’re all happy with the outcome so far and the future that lies ahead, but technically on the sport’s side of it, it’s been really challenging for all of the teams, getting the cars up to spec and developing the cars. After the first two races, we’ve already learned so much about the car that we didn’t know in Daytona. It’s a process. I know the LMP2 cars haven’t had to change their cars that much, so for the DP cars I think it’s been a greater challenge as far as resources and development. But we’re all in the situation where every weekend, we could learn something new. It’s going to be like that all year. I expect the competition to get tougher every weekend.”

JAMIE ALLISON, Director of Ford Racing: “How about this EcoBoost technology? It’s really opening a new chapter in Ford Racing history and (Ford Motor Company) history. What’s so monumental is that one of our last big wins here in Long Beach was in 1987, we won here with none other than Scott Pruett (in Trans-Am). It’s great to come back to a place that’s familiar to everyone, but this time with Ford EcoBoost under these Ford DPs.”

JOHN MADDOX, Roush Yates Engines: “It’s hard to count on wins, but it’s really good to know that we’re with two really good teams. We covered the front row here with our EcoBoost engines. It’s been spectacular. All the people at our shop in every department have worked hard and dedicated themselves to excellence in this program. It’s been great. We’re happy to win; happy to be associated with Chip Ganassi Racing with Felix Sabates, with Ford Racing, with Michael Shank Racing. It’s just been good all-around.”

OZZ NEGRI: “It’s pretty frustrating, but that’s racing. All I can say is we worked hard. We had what we wanted, it just wasn’t meant to be. I really don’t know what to think or what to say. I had high expectations. At the end of the day, I’m happy with the speed. I’ve never had so much fun driving the car in my whole career. I just wanted to put the hammer down and say hey, we were here.”

JOHN PEW: “(The first time) I was a little bit wide of the braking zone. The car wasn’t downshifting. It stayed in sixth gear the whole time and I was just trying to decide what to do and hammering the brakes. It wasn’t a large hit, just a tiny tap into the wall. Then I couldn’t get it out of sixth gear. Then I tried to get it in reverse, which took awhile. Took a few laps, I think. I finally got it around and out again. Then the car was fine for awhile. It could’ve been fairly competitive. Then going into Turn 8, I knew Michael (Valiante) was coming. I knew he was coming into the corner, into the apex, so I left him a little bit of space. He was kind of in front of me. Hit the curb and spun right in front of me and I just hit him. Then I came down the straightaway and after that the engine just died…It was a sensor that went. I don’t know if we hit something or what. It was just a bad day at the office, that’s for sure. The car was definitely capable. I think we had a really good shot. I feel really bad. Once I started to get freight-trained at the start, if I had just let those guys go by we would’ve been fine. So it’s partly my fault too.”