Pastor Maldonado has hailed his “special” first win as a sportscar driver following his LMP2 class triumph with DragonSpeed in last weekend’s Rolex 24 at Daytona.

Former Williams and Lotus Formula 1 star Maldonado switched full-time to endurance racing at the start of 2018 after signing up to DragonSpeed’s LMP2 effort in the FIA World Endurance Championship.

With three rounds left of the 2018/19 superseason, Maldonado and co-driver Roberto Gonzalez lie fourth in the LMP2 class standings, having scored a best finish of second in the most recent round of the series in Shanghai last November.

Maldonado and Gonzalez were joined in their #18 Oreca-Gibson at Daytona by Sebastian Saavedra and Ryan Cullen, and came through a fraught weather-affected race to claim victory in IMSA’s new secondary prototype class.

Asked by Motorsport.com whether he felt the win marked his arrival as a true sportscar driver, Maldonado replied: “Yes, I need to say that. It’s a special one, it’s our first, my first Daytona, really pleased about this.

"But obviously every new process needs its time, and I think we’ve been working quite hard since the beginning of my experience in prototypes.

“Now we’ve covered that first experience and I need to say the team is very well compact and delivering our best. Normally we should be fighting for the win from now on.”

Saavedra appeared to put DragonSpeed’s win in jeopardy when he aquaplaned and hit the wall in the closing stages, an accident that prompted the final caution period of the race.

The former IndyCar racer was able to get the stricken #18 car back to the pits, but admitted the fact the race was stopped shortly afterwards saved the team from potentially losing out to rival squad Performance Tech, which was four laps down.

“When I did put it in the wall, everything went through my mind,” said Saavedra.

“The first thing you think of is you let down this amazing group of people and the amazing crew that have pushed for 48 hours. It was almost heart-breaking.

“But the engine was still on, and I was able to point it at such an angle that not much damage was done, we were able to come back [to the pits].

“I did not expect it to go red, I think that was our saving moment. But we were ready to go back out and continue doing what we were doing.

“It was just the front nose [that was damaged], kudos to Oreca because that car’s a tank.” 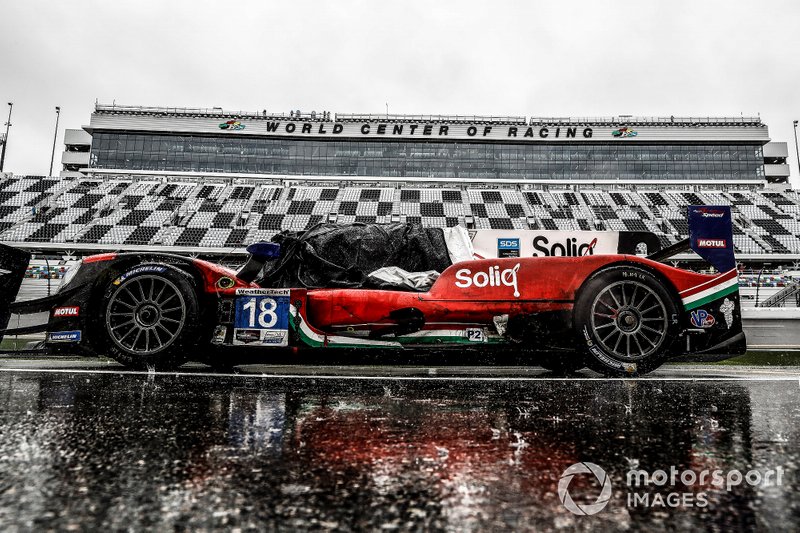