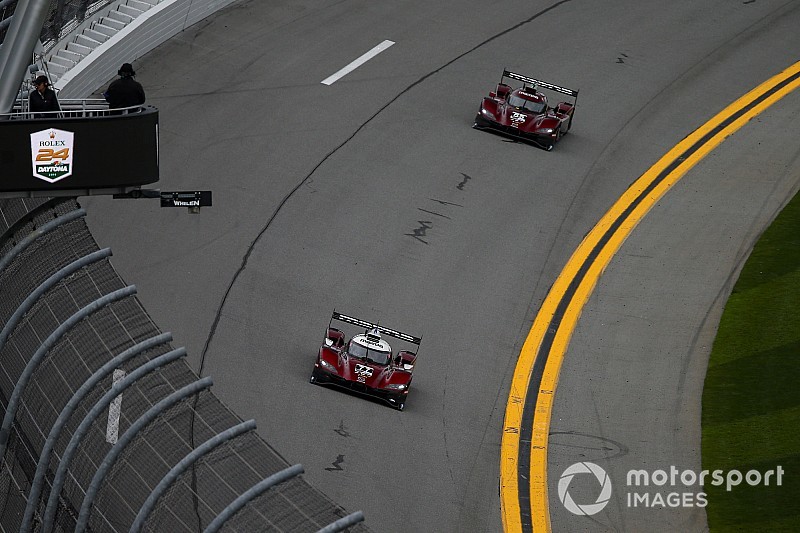 Mazda Team Joest is looking ahead to the Mobil 1 Twelve Hours of Sebring with optimism after claiming to have solved the issues that knocked both its cars out of the Rolex 24 at Daytona.

The #77 Mazda RT24-P of Oliver Jarvis, Tristan Nunez, Timo Bernhard and Rene Rast took pole with a new track record, led the race and was running second in January's IMSA WeatherTech SportsCar Championship opener when it caught fire in the engine bay.

The incident occurred approaching the seven-hour mark, barely three minutes after the #55 car of Jonathan Bomarito, Harry Tincknell and Olivier Pla stopped with a fuel leak.

John Doonan, director of motorsports and team development at Mazda North America, declared today at Sebring: “Daytona was a record-setting moment for us as a program, as well as the records that fell at Daytona. We’re really proud of that.

“But obviously nowhere near satisfied based on what happened in the race. We had some unfortunate luck. Unexpected luck. But we know exactly what went wrong, it’s been addressed.

“We had a great couple of test days here two weeks ago, so I think we enter the race with a strong feel of our potential. We ran really well here last year, darn near won the thing.

“From my standpoint, Multimatic has truly transformed the racecar, especially over the last 18 months or so, leading into last year’s campaign. We did a significant amount of testing in the winter, we showed in Daytona we had the pace in the package.

“Now it’s about executing, putting all the pieces together.”

Tincknell, who is one of the full-time drivers of car #55 along with Bomarito, added: “If you look at our performance at Daytona last year and how we came to Sebring and competed right at the front the whole way, led the race for a long time, right at the front going into the last pitstop... we made a big step forward at this track, we were at the front on merit and we could have won the race.

“Daytona this year was exactly the same. We qualified on pole, ran at the front on merit. Disappointing not to finish but we found the issues, we’re moving forward.

“We know the car should suit [this] track and we’re going to try and repeat last year but finish it off in that last stint.

Bomarito said: “The guys worked really hard on the cars between Daytona and now. As John mentioned, we had a really successful two days of testing.

“This is a really tough race, we just have to execute the whole time. I feel like we have really quick racecars, great team, great group of drivers, we’re all confident and we love this track.

“It’s just putting it all together, and there’s very stiff competition out there.”

Bomarito is one of several drivers to pull double-duty at Sebring this week, as he’ll be racing for the European arm of the Ganassi Ford GT team in the WEC event on Friday.