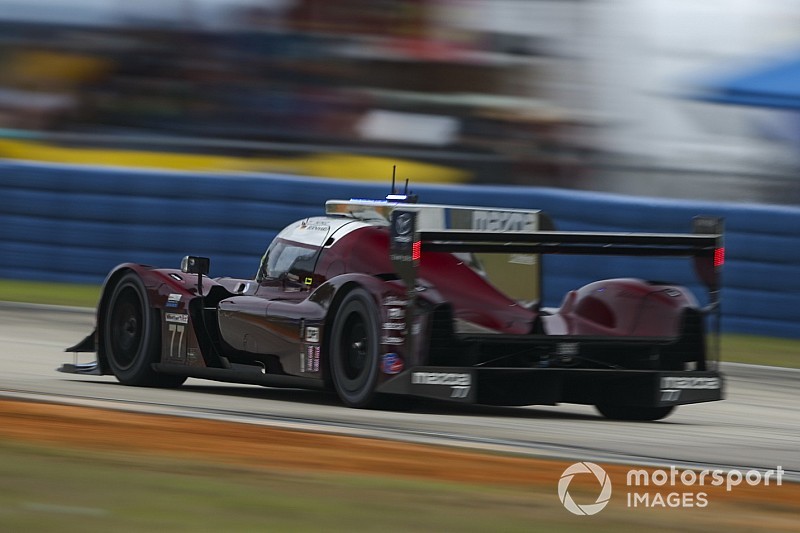 Oliver Jarvis led temporary teammate Ryan Hunter-Reay by 0.064sec to send the pair of Mazda Team Joest RT24-Ps to the top of the times in Mid-Ohio as the track surface dried and several teams started to switch to slicks in the closing moments.

The session was interrupted by two red flags. After 6mins, Ricky Taylor went off at Turn 12 in the #7 Acura ARX-05, but got back to the pits. At the halfway point in the 1-hour session, T12 claimed another victim, the Moorespeed Audi R8 of Will Hardeman.

Indeed there were several off-course excursions at T12 and T2 but thankfully without significant damage, although it made the track surface increasingly perilous as more and more mud was dragged on.

Simon Trummer and Misha Goikhberg grabbed third and fourth in the two JDC Miller Motorsports Cadillac DPi-V.Rs ahead of Helio Castroneves who took over the #7 Acura following his teammate’s mishap.

Most startling of all was the AIM Vasser Sullivan Lexus RC F of Jack Hawksworth which wound up sixth overall – 3sec ahead of its nearest GTD rival, 2sec ahead of the fastest GTLM car – thanks to a change to slicks in the final laps.

Will Owen fell off the track in his Juncos Racing Cadillac but was able to finish seventh ahead of both Filipe Albuquerque in Action Express Racing’s similar car.

A strong final lap from Nick Tandy put the #911 Porsche 911 RSR at the head of the GTLM class ahead of Jesse Krohn’s BMW M8 and the Earl Bamber/Laurens Vanthoor #912 Porsche.

Aside from Hawksworth, the rest of the GT Daytona runners were led by Scott Hargrove/Zacharie Robichon’s Pfaff Motorsports Porsche 911 GT3 R, Marco Seefried/Pat Long in the similar machine of Park Place Motorsports, and Mario Farnbacher in the faster of the two Meyer Shank Racing Acura NSXs.

Third practice begins at 8.00am local (Eastern), with qualifying commencing at 11.40am.