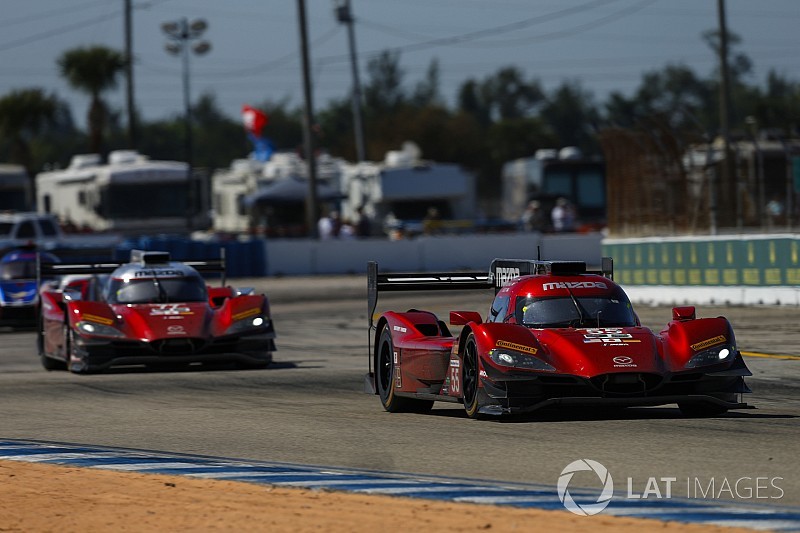 Mazda Team Joest driver Harry Tincknell made the claim after he and team-mates Jonathan Bomarito and Spencer Pigot were deprived of a shot at the win in Sebring when the car failed to restart at its final pitstop.

"That performance proves we are ready to start winning races," Tincknell told Motorsport.com. "We didn't expect even to be in contention for a podium, but going into the final stages we definitely had a chance of going for the win.

"We were set up for the end of the race — it would have been maximum attack over the final laps."

Joest team boss Ralf Juttner suggested that it would have been difficult for Tincknell to overcome race leader Pipo Derani in the winning ESM Onroak-Nissan DPi, but he said that he was happy with the pace of the RT24-P over the full distance of the race.

"The speed was good throughout — I thought we might suffer in the heat during the day, but we were surprisingly good in all conditions," he said.

There was no repetition of the engine problems that hit Mazda at the Rolex 24 at Daytona IMSA opener in January and last month's pre-Sebring test.

Tincknell had moved the car up from fourth before two quick-fire safety cars at the end of the 11th hours to second position ahead of the final round of pitstops with just over 40 minutes left.

Three minutes were lost getting the car going, which dropped Tincknell and his teammates Spencer Pigot and Jonathan Bomarito to sixth.

Two problems combined to prevent a regular getaway. A clutch issue had been forcing the Mazda drivers to leave the pits on the starter motor, but a falling battery charge — another on-going problem — precluded that.

The second Mazda finished 10 laps behind in eighth position after losing time when the right-hand brake caliper needed changing after a freak failure of a seal on the bleed nipple.