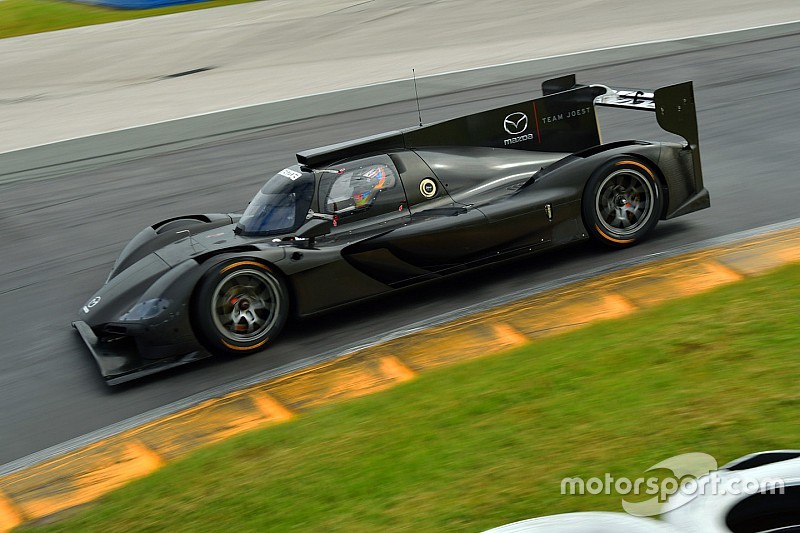 Mazda Team Joest has revealed a revised full-time line-up for its IMSA WeatherTech SportsCar Championship assault next year, while Spencer Pigot and Rene Rast will join for the four endurance events.

Jonathan Bomarito and Tristan Nunez have been retained for what will be their fourth and fifth seasons respectively with Mazda, but Joel Miller and Tom Long have lost their rides to Oliver Jarvis and Harry Tincknell.

Jarvis won the LMP2 class at this year’s Le Mans 24 Hours, on his way to second in class in the FIA World Endurance Championship, driving for Jackie Chan DC Racing.

His history with Joest Racing includes overall victory with Audi in the 2013 Sebring 12 Hours.

Tincknell, who this year finished third in the WEC’s GTE Pro class with Ford Chip Ganassi Racing, is another driver who has won the LMP2 class at Le Mans and has been champion in LMP2 in the European Le Mans Series.

Tincknell's Ford deal will take precedence and he will race in the WEC opener at Spa next May rather than in the clashing Mid-Ohio IMSA event.

Jarvis will be ending his relationship with Bentley, with which he contested the 2017 Blancpain GT Series Endurance Cup, but is understood to be still in frame to retain a seat with the Jackie Chan DC Racing LMP2 squad.

As yet, driver partnerships haven’t been decided for the pair of RT24-Ps, which Pigot and Rast will share for the Rolex 24 Hours at Daytona, Sebring 12 Hours, Watkins Glen Six Hours and Petit Le Mans.

For IndyCar rising star Pigot, this will mark his third season as part of Mazda’s endurance lineup, but his links with Mazda include clinching the 2014 Pro Mazda title and 2015 Indy Lights title.

Rast, who won the DTM championship this year in his first attempt, raced an IMSA prototype this year, and finished on the podium for Visit Florida Racing.

After three podium finishes in the first seven races of the 2017 IMSA season under SpeedSource’s auspices, Mazda announced it was partnering with 15-time Le Mans winners Joest Racing for 2018.

The RT24-Ps were promptly withdrawn to allow Joest to evolve the cars in preparation for next year.

In announcing the revised driver lineup, John Doonan, director of Mazda Motorsports in North America, stated: “Mazda has had a driver development program since 2007.

"So it’s a big part of our Mazda Prototype program to feature drivers that have come up through the Mazda ranks, whether that’s in sportscars like Tristan Nunez, or the open-wheel side of things with Bomarito and Pigot. We’re thrilled that those superb young men are back with us again in 2018.

“Working with Joest, we were also able to secure fast, winning drivers from their recent history, which makes Jarvis and Rast a good fit, as is Tincknell, who has been successful in both GT and Prototype cars.

“We ask a lot of our drivers outside the car as well, so it’s great to add drivers who will fit the chemistry of what we hope to achieve as a team.”