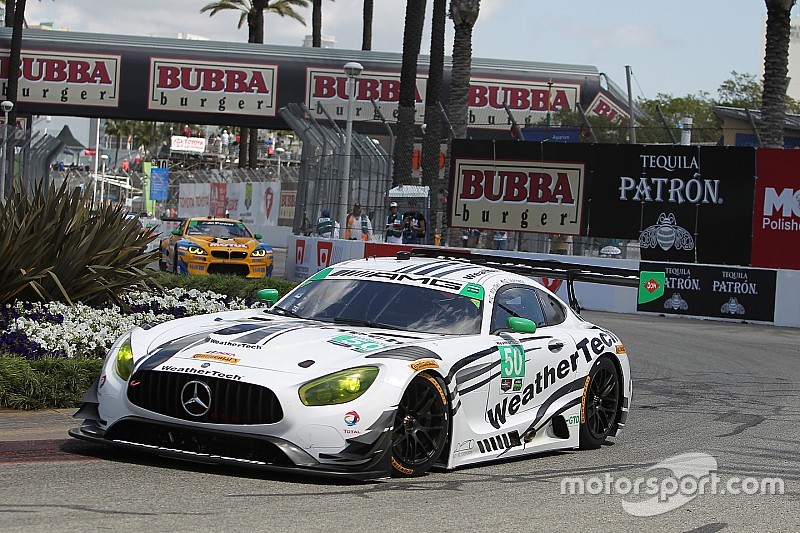 Tobias Moers, chairman of the board of management for Mercedes-AMG, says he’s impressed by leading the manufacturer points standings in the GT Daytona class of the IMSA WeatherTech SportsCar Championship.

The Mercedes AMG GT3 is new to the series this year, but after just three rounds already has two wins and a pole position.

In last month’s 12 Hours of Sebring, Tristan Vautier delivered the first GT Daytona (GTD) pole for the manufacturer in the SunEnergy1 Racing Mercedes-AMG GT3. The next day, Ben Keating, Jeroen Bleekemolen and Mario Farnbacher scored its first victory in the Riley Motorsports-Team AMG entry, while Vautier put in an epic drive after earlier penalties to grab third on the final lap.

Then in last weekend’s Sports Car Grand Prix at Long Beach, the WeatherTech Racing team of Cooper MacNeil and Gunnar Jeannette headed a Mercedes 1-2 ahead of Bleekemolen and Keating.

The results have given Keating, Bleekemolen and the #33 team a 21-point lead in the GTD driver and team standings respectively, over the class's defending champions, the Ferrari 488-mounted combo of Christina Nielsen, Alessandro Balzan and Scuderia Corsa.

Mercedes-AMG leads the GTD manufacturer point standings, nine points ahead of Porsche despite being new and one of nine OEMs in the class.

“The performance of all of our Mercedes-AMG Motorsport Customer Racing teams in the IMSA WeatherTech SportsCar Championship so far this season has been amazing,” said Moers. “To be leading the championship is a great endorsement of our engagement in this extremely popular GT racing series.

“The IMSA WeatherTech SportsCar Championship is the perfect stage to expose the performance of our Mercedes-AMG GT3 in close collaboration with our professional customer teams and drivers. We are looking forward to the rest of the IMSA season.”

Jan Magnussen: We got royally screwed at Long Beach