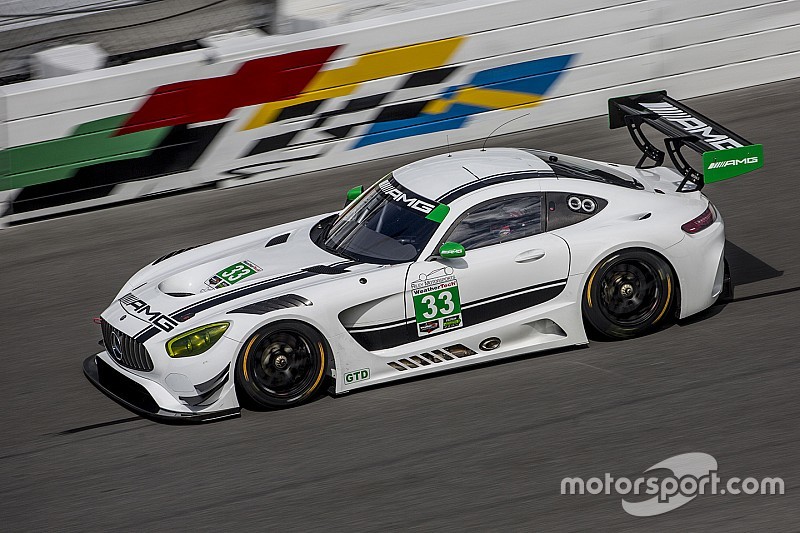 Mercedes-Benz AMG has confirmed its participation in the 2017 IMSA WeatherTech SportsCar Championship, with at least three GT3 cars in the GT Daytona class.

The German manufacturer has partnered with Riley Motorsports for a two-car factory-supported effort, with one car running under the "AMG-Team Riley Motorsports" banner and the second entry for WeatherTech Racing.

Australian stock car driver Kenny Habul, who raced a Stevenson Motorsports Audi R8 at Daytona this year, has formed his own team, SunEnergy1 Racing, which will also campaign a Mercedes-AMG GT3.

The No. 33 AMG-Team Riley Motorsports entry will be driven by Ben Keating and Jeroen Bleekemolen, and the No. 50 WeatherTech Racing Mercedes-AMG GT3 will be shared by co-drivers Cooper MacNeil and Gunnar Jeannette. MacNeil and Jeannette got their first seat time in the car in a late September test at Germany’s famed Hockenheim circuit.

The identity of Habul's co-driver is unclear at the moment.

“North America is traditionally a very important market for Mercedes-AMG and the enthusiasm for our performance vehicles is tremendous," said Tobias Moers, Chairman of the Board of Management for Mercedes-AMG.

"The high demand for the Mercedes-AMG GT3, particularly after the legendary 1-2-3-4 finish at this year’s 24-hour race at the Nurburgring, has inspired us to establish a Customer Sports Program in the U.S.

"I’m very much looking forward to cooperating with all of the teams and wish them success in the upcoming season."

According to Mercedes-AMG, additional teams are "scheduled to announce" their intent of racing in North America next year, likely in the Pirelli World Challenge.

The German manufacturer will provide at-track support at every event next year, alongside the launch of a technology and logistics center in Moorsville, N.C., which is believed to be operated by Riley.

“Our aspiration for expanding the AMG Customer Sports Program in the U.S. is to provide the same level of comprehensive support that we have provided to teams in Europe for several years," said Jochen Bitzer, Director of AMG Customer Sports Program. "This requires a close collaboration with the teams in terms of know-how and racetrack expertise, which we are now ideally positioned for.

"We are very excited for a thrilling and hopefully successful season."

At least one Mercedes-AMG GT3 is expected to make its debut in next week's IMSA-sanctioned Daytona test on Nov. 15-16, with additional announcements to follow from each team.