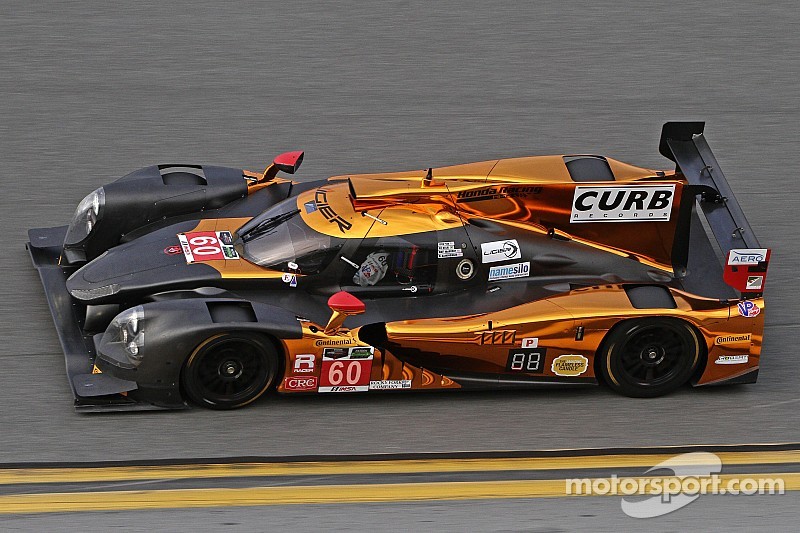 The squad has moved to a Honda-powered Ligier JS P2 machine for the 2015 season.

Daytona Beach, Fla. – Michael Shank Racing with Curb/Agajanian is one of the most experienced IMSA TUDOR United SportsCar Championship teams in the paddock, having competed at Daytona International Speedway for the past 10 years.

But this year, the Ohio-based team arrived at the World Center of Speed for the annual ‘Roar Before the 24’ test days with a brand new car and a brand new challenge.

After competing in the TUDOR Championship with a Daytona Prototype for 10 years, the squad has moved to a Honda-powered Ligier JS P2 machine for the 2015 season.

A productive test in the first time out with the new car earlier this week at Palm Beach International Raceway built some familiarity with the Honda-powered Ligier JS P2, and the team rose to the challenge with another positive outing in the traditional Roar Before the 24 to close out the week.

The full Rolex 24 At Daytona driver line-up – which includes longtime Michael Shank Racing drivers John Pew, Ozz Negri and AJ Allmendinger as well as 17-year-old newcomer Matt McMurry – all took part in the test as the group learned the intricacies of the new machinery.

The test provided a healthy mix of different track conditions with Friday presenting cool and overcast weather, while Saturday brought sunny skies and milder temperatures. Sunday’s sessions opened with medium precipitation, giving the team a chance to also learn more about the car in wet conditions and how it runs on the Continental Tire rain tires.

Allmendinger set the fastest time of the afternoon session on Saturday, with the Ligier-Honda showing speed right out of the box with competitive times through the full weekend of sessions.

It was a valuable three days for the Michael Shank Racing team, who gathered important data on the car heading into the Rolex 24 At Daytona as well the entire 2015 season.

“I’ve been pleasantly surprised with how good the car is and how well prepared it is,” said Team Owner Mike Shank. “We’ve had little issues, but nothing ever slowed us down. It’s a big learning process. The Onroak folks were amazingly accommodating to us and made sure we had what we needed when we needed it. But on top of that, they’ve built a car that everybody just loves to drive.

I think we are very competitive so that’s good. It’s very different preparing this car compared to preparing the Daytona Prototype (DP). We know what the DP did, we had it for 10 years. With this new car, we just don’t know. We have four days back at the shop and it’s just going to be a massive press to make sure we get everything done that we need to.”

The excitement from each person on the team involved with the new Honda-powered Ligier JS P2 is unmistakable. From the crew, to the drivers, to the Michael Shank Racing fans, the 2015 TUDOR Championship is a very highly anticipated one.

The Michael Shank Racing with Curb/Agajanian Honda powered-Ligier JS P2 will make its official race debut on January 24, 2015 when it takes the green flag for the 53rd running of the Rolex 24 At Daytona.

John Pew: “I’m very happy with the car. It’s very consumer friendly, driver friendly as far as the controls and the cockpit and the cooling. I think it’s very friendly to the mechanics to work on. It’s very easy to work on – it’s well thought out. I’m with Mike (Shank) 100% on his decision to switch from the Daytona Prototype to the Ligier JS P2. It was time to change and this was the way to go. Someday I would like to race over in France (at Le Mans)…”

Ozz Negri: “The Ligier JS P2 is a car that rewards rolling speed into the corner. Driving a Daytona Prototype for so long, we were naturally worried about how long it would take for us to really get a handle on this car and what it takes to drive. But it was really seamless – it happened really fast. This car does everything a racecar driver wants. I’m impressed with it. I’m also extremely impressed with the HPD Honda package. What we’ve been working on a lot at this test is the electronics and working to keep the tire life as long as possible. There is still a lot to learn, but we are in good shape. I’m extremely happy to have made this move and I feel pretty confident heading into the Rolex 24.”

AJ Allmendinger: “This is the type of racecar that really throughout the last 10, 11 years of car racing that I’ve done, I’ve always wanted to try. I’ve always thought the cars looked beautiful and anyone you talk to that sits in these types of car, just raves about how fun it is to drive. The support that I see around the hauler and on the timing stands from Honda and Onroak, is more than I’ve ever seen. Just for that fact, I’m excited for the Rolex 24 and I think we have a great shot. We still have a lot of work to do to get the car comfortable for everybody but I’m just liking the support system that Mike (Shank) has. It’s probably the most support he’s ever had and that it was excites me the most.”

Matt McMurry: “I’ve been really impressed with everything I’ve seen so far at Michael Shank Racing with Honda and Onroak. It’s just been really good. Everyone has been so supportive and welcoming this entire weekend. The Ligier JS P2 car has been really, really fun to drive. It feels like it’s already set up pretty well and I think we have a great opportunity to do really well in the Rolex 24.”