The upcoming thriller Need for Speed will open nationwide on March 14; Sebring 12 Hour race set for live broadcast on Fox Sports 1 March 15 at 10:00 AM ET.

Sebring, Fla. – Michael Shank Racing with Curb/Agajanian is ready to go for round two of the 2014 IMSA TUDOR United SportsCar Championship and the 62nd Annual Mobil 1 Twelve Hours of Sebring Fueled by Fresh from Florida this week at Sebring International Raceway. 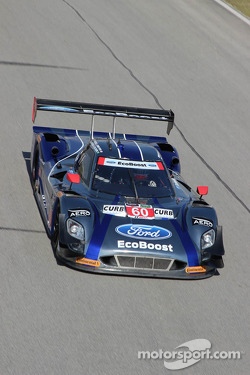 Michael Shank Racing with Curb/Agajanian will proudly carry the colors of its latest promotional partnership, as the team looks to support this weekend’s opening of the DreamWorks Studio release Need for Speed.

John Pew, Ozz Negri, and Justin Wilson will share the driving duties in the No. 60 Need For Speed Ford Ecoboost/Riley Daytona Prototype as the trio looks to continue to make progress after a productive test at the bumpy track in February.

While Saturday’s race marks the first-ever competition outing for Michael Shank Racing with Curb/Agajanian, the team not only has extensive experience testing at the track, but the drivers all have logged countless laps on the track. The 3.74-mile circuit will be bursting at the seams with race traffic, as four classes and nearly 70 cars are set to share the bumpy and often tight road course.

Mike Shank: “This is the first time in, I think ever, that we have worked this closely with another team to develop a package. Our team and Chip Ganassi Racing have worked literally hand-in-hand for 80% of the car to try and perfect it as quickly as we can. It has worked beyond my wildest dreams. It has been very very good and I see no reason why we can’t continue to improve and keep the lines of communication open and honest and I’m really happy with it.

“It is an extremely intensive effort this year, bringing the Ford EcoBoost motor online along with all of the changes that IMSA has made this year, it has been very trying. It reminds me of the old open wheel Toyota Atlantic Series where we just had to start testing. I think we will have that a lot this year, there are just so many new things that we all want to perfect as quickly as possible. That makes it impossible not to run. If you have any budget at all you have to run. It’s been a bit tough but we are making steady progress.”

John Pew: “The track has a lot of subtle qualities. We are getting there, but it is going to take a little time. We are making progress every time we make a change. But it is a new track for this car and team and we need to work at it. But Justin and Ozz are great. They have a lot of experience between them at this track, in fact I think Ozz has more laps on this track than any human being, so it is fantastic to have these guys with the team.

“The first time I came to Sebring was in 1999 when I did my very first Skip Barber three-day racing school with my son. So it has been a long time. We did a lot of laps and a lot of miles here all the way up until about 2005 in all kinds of cars. It is great to be back, it hasn’t changed one bit, which IS a good thing. It is good practice driving the DP around all this traffic right now. There has been a lot of traffic during the whole test and it is going to be a very interesting race.”

Ozz Negri: “I’ve got a lot of miles here at this track. I tested with the Barber Dodge Pro Series here twice I know the track pretty well. I also did some testing here with the Formula BMW. Now I’m here with our DP and it is a completely different experience, but a lot of fun. It is so much fun to drive here and with the extra downforce it’s awesome, especially through the faster corners like turn-one and turn-17. It’s also extremely challenging, not just for the drivers but also for the engineers. To get the car to ride the bumps as best as we can, especially in turn-17. We made great improvements from the first day of testing to the second and I think we are definitely on the right track.

“The No. 5 car is for sure in a league of its own. You can just see the way it rides on the front straight and they are definitely carrying a lot of speed through turn-17. So they are our benchmark and that is what we are working on. This track is so different from Daytona, because there you come out of the turn and you have a very long straight. There the GT drivers have time to look in their mirrors and here they don’t have that time, so it is harder for them to see where we are and for us to know what they are going to do. It is definitely going to be a survival race and a very hard one at that.”

Justin Wilson: “Both days here (testing) with Michael Shank Racing have been really good and we have learned a lot. We are trying to make the car go faster. It is a fun and challenging track to drive. What always surprises me when I first jump in a DP car is the corner grip and how much grip you can take through some of the slower corners. On this big track going through turn-one that is fun, but going through some of the tighter corners like turn-10 and even Tower Turn, the car hangs on well and it’s very rewarding to drive. With the No. 60 car we have made some really great progress.

“I feel like we are definitely improving although we still have a ways to go. We are pushing hard and trying to get a little bit more grip and get the car to ride the bumps. Typically the biggest complaint around this track is getting the wheels to stay on the ground. You spend a lot of time with the wheels off the ground and you don’t have a lot grip that way. So you are always trying to get it to ride those bumps and get more grip so you can carry more speed and get back to the throttle earlier. So that is in a nutshell of what we are trying to achieve.”

Rayhall reunites with 8Star for TUDOR Championship 12 Hours of Sebring