Michelin returns to Daytona after 13 years

For the first time in 13 years, Michelin will compete in one of America’s premier motorsports events, the Rolex 24 at Daytona, Jan. 25-26.

Excluded in recent years by a series of single specification tire agreements, Michelin has jumped into the “open tire” GT Le Mans (GTLM) class in the new TUDOR United SportsCar Championship, the first event under the merger of the former American Le Mans Series (ALMS) and GRAND-AM series.

“Michelin is pleased by the unification of sports car racing in North America and we are looking forward to returning to the Rolex 24 at Daytona and the first season of competition in the new TUDOR Championship,” said Chris Baker, motorsports director for Michelin North America.

Michelin took the overall win at Daytona in 2000 with the Oreca Viper team. 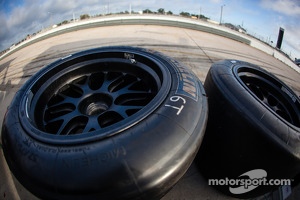 Michelin and its technical partner teams dominated the ALMS with 139 race wins and 392 Prototype and GT class wins in the 147 ALMS races and secured 39 ALMS Class Tire Championships. Also, Michelin has taken the overall wins at Sebring and Petit Le Mans for the past 15 years and at the 24 Hours of Le Mans for the past 16 years.

While constrained to a single GT class in 2014, Baker sees plenty of challenges for Michelin in the 24-hour event on the 3.56- mile circuit.

“We have over one million race miles at Le Mans over the past 16 years, but just 10,000 miles of testing here at Daytona International Speedway. This is the very first race for the new Corvette and none of our technical partners have raced their current cars here before, so we will all be in a learning mode,” said Baker.

To celebrate its return to the Rolex 24 at Daytona and the unification of sports car racing under the new TUDOR United SportsCar Championship, Michelin is offering a special prize to its technical partner teams.

“Our racing technology goes into our street tires, and our teams have helped us develop many of the innovations that we’ve taken to market, including the highly acclaimed Pilot® Super Sport, Pilot® Sport A/S 3, Defender® and our new MICHELIN® Premier® tires launched earlier this month,” said Silvia Mammone, motorsports marketing manager for Michelin North America.

“Drivers and team principals get the glory, but winning a 24 hour race demands a total performance by every member of the team, so we want them to share in the victory and enjoy the MICHELIN tires that best suit their own vehicles,” said Mammone.