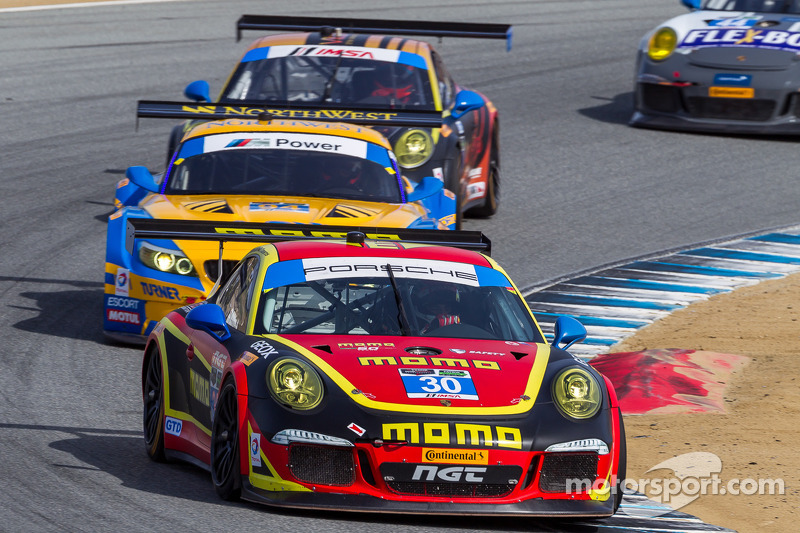 Competing in the GT Daytona (GTD) class of the combined Prototype and GTD IMSA TUDOR United SportsCar Championship race, MOMO NGT partner and driver Henrique Cisneros started the race in eighth and turned the wheel over to teammate Giermaziak on Lap 26 in the seventh position.

Although the team had a couple of issues during the two-hour race, namely a slow pit stop and a near incident with a Prototype Challenge car which flat-spotted two tires, Polish native Kuba Giermaziak managed to set the fastest lap of all the Porsches in the field. Using its two pit stop strategy, MOMO NGT Motorsport was able to better set up its Porsche 911 and gain points going in to the next round of the Championship.

This was a notable achievement considering that in the team's previous race, the 12 Hours of Sebring, the No. 30 Porsche was involved in an incident that totaled the car, causing the team to completely rebuild it prior to Laguna Seca. MOMO NGT used the two practices and qualifying sessions on Saturday to get a feel for the new car and to make pre-race adjustments, which paid off in the race.

Kuba Giermaziak, qualifying driver of No. 30 MOMO NGT Motorsport Porsche 911 GTD: "It was a tough race. On Saturday in the first practice, we were trying to catch up to the other cars. When we got to qualifying, we had the perfect car. In the race, we had a lot of issues with the setup. We made a little change in between the warm up and the race, and while we were very fast in the warm up, we were just okay in the race. For half of my stint, we were on the pace or even the fastest Porsche, and then the car just dropped much more than the other cars. With maybe 20 laps to go, I had a prototype pull out in front of me and break very early and I had to avoid hitting him and I flat spotted my tires and at the end, that was it. We have a new car since Sebring so we have to catch up now. The pace is there, we just need a bit more luck."

Henrique Cisneros, MOMO NGT Motorsport Partner/Driver, No. 30 MOMO NGT Motorsport Porsche 911 GTD: "The race went very well and everything went according to plan. Unfortunately, we did have a little bit of a long pit stop. When I came in we were in seventh place, and when we got back out we were 20 seconds behind the WeatherTech car, which was only one car ahead of me. After that, we were a little bit slower than average, and those couple of tenths lap after lap added up. In the end, we crossed the finish line in 12th, Kuba did a great job, the team did a great job, and we can find a little bit more speed for the next race. We'll get there."

Lauren Elkins, Data Engineer, No. 30 MOMO NGT Motorsport: "It was definitely a very challenging race strategy-wise when you have a race this short. You never know if it's going to be a one-stop or two-stop race. We took a gamble; we were hoping for another yellow but we only got one so, unfortunately, we did have to come in for a splash (of fuel) like a lot of the other leaders. Those who didn't take the gamble were able to make it to the front without having to do a third stop. Unfortunately for us it didn't pay off but the guys ran great, their lap times were phenomenal and I couldn't be more proud of the team."

Ramez Wahab, NGT Motorsport Owner/No. 30 MOMO NGT Motorsport Team Manager: "On the first pit stop we lost about eight seconds. We had an issue getting the front left tire off and refueled. Unfortunately, Kuba almost ran into a PC car. The guy spun and Kuba almost hit him and had to brake so hard to not hit him that he flat spotted the front tires and that caused a slow leak in the tire, so we finished twelfth. We had the fastest Porsche out there. If I'm not mistaken, we were four-tenths faster than the second fastest Porsche. Unfortunately, at the end of the race it didn't go our way, but that's racing. It's not the best result but we'll work on it and go from there on."