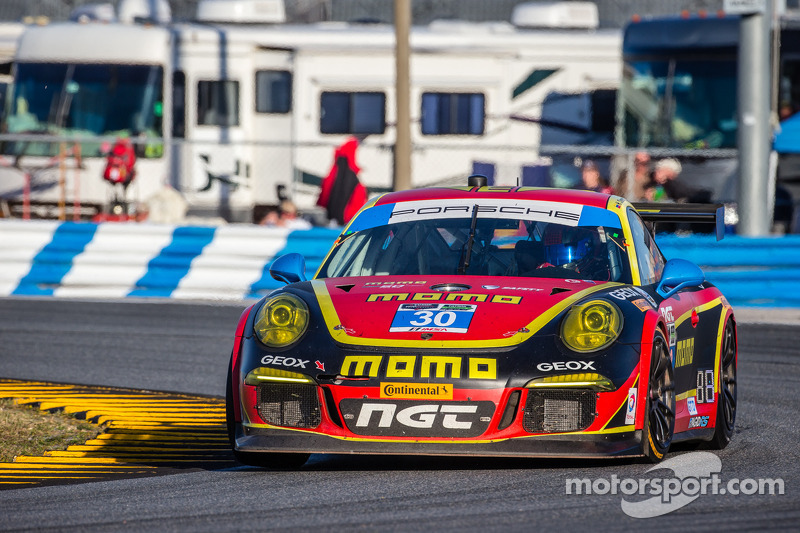 Having not participated in the IMSA series test at Sebring in February, the team is eager to feel their new Porsche 911 GT America (Type 991) out on the legendary track.

Sebring, Fla. -MOMO NGT Motorsport takes to the famous Sebring International Raceway this week for the IMSA TUDOR United SportsCar Championship 62nd Annual Mobil 1 Twelve Hours of Sebring Fueled by Fresh from Florida, March 15, an event at which the Miami-based team has had much success. 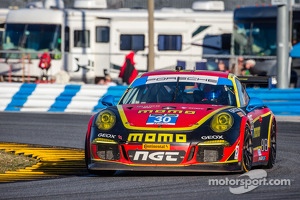 At Sebring, the team's home track, MOMO NGT Motorsport has finished on the podium twice in just three appearances, and is looking for another triumphant result.

Having not participated in the IMSA series test at Sebring in February, the team is eager to feel their new Porsche 911 GT America (Type 991) out on the legendary track. With plenty of Sebring experience under his belt, team partner and driver Henrique Cisneros is joined by Sebring rookie Christina Nielsen and season-long co-driver Kuba Giermaziak in the cockpit of the No. 30 GTD entry.

With the raceway being known for it's bumpy and unforgiving surface and such a large field of GTD competitors, the Porsche team has their work cut out for them, and isn't afraid of the challenge.


In 2011 and again in 2013, MOMO NGT Motorsport finished third at Sebring. What will it take for the team to finish on the podium again this year? "It's an entirely different animal this time around. There is three times the number of entries in the GTD class compared to the GTC class of ALMS, so triple the number of potential winners. However, we have always done well at Sebring and we know we will be competitive again this year as long as we don't run into bad luck. It is our home track so setup should not be an issue for us. However, it will be a sad race for us since we are missing two of our pillars that we have always had in the last 3 years. It will be a tough race without Sean Edwards and our lead engineer Konsta, who recently passed away. They will be in our hearts and it would be really special to dedicate a podium for them."

Christina Nielsen will be joining you and Kuba for this second endurance event of the season. At this track, what will be the strengths of each of the drivers? "Christina has proven that she has the pace and consistency to race in the TUDOR championship. She always takes great care of the car and has been a fantastic addition to the team. This will be my fourth 12 Hours of Sebring so I am the veteran of the team with the most laps by far. Kuba will always be the closer since he turns into a rabid dog in his last stint."

MOMO NGT did not participate in the Sebring test in February. What has the team done to prepare for their fourth appearance at the 12 Hours of Sebring? "We did not feel the need to participate in the test as we were fine tuning our car at the shop and feel we learned a lot about the new Porsche from the 24 hour race at Daytona. We are trying as much as possible to keep our costs down this year, but the series has had many rule changes which have had a direct impact on everyone's budgets. In the end, it will come down to the balance of performance changes that are definitely needed to be competitive against the Ferrari and Audi teams."

You've raced at Sebring with MOMO NGT Motorsport before. What are you expecting for this year's event with the new Series and the new GTD class? "As we saw at Daytona this year, the GTD class is full of very tight competition and now that we're one race into the season we have a better understanding of the other team's strengths and how to close the gap on them. This race always feels much longer than twelve hours, so I'm expecting a hard-fought battle on this course. Although we will try and conserve our resources and energy and then push very hard at the end, it seems like this event is always a twelve-hour sprint race. The team is prepared for the tough track and even tougher competition, so we're going to give our strongest effort and hope that MOMO NGT's past success is repeated."

The Sebring track is known as being grueling. How does that, paired with a 12-hour endurance event, affect the mind and body of a driver during the race? "At a track and an endurance race like Sebring, it is most important to stay focused on the stint at hand. No matter what has happened or what could happen later in the race, the driver must concentrate on driving fast and bringing the car back to pit lane in one piece for their stint. Sebring is a very difficult course, but as long as the driver stays focused and on those two goals, the strain it puts on the mind and body can be overcome for a successful turn in the car."

You have plenty of experience racing Porsches, but never at Sebring. From your time on track at the test last year, what knowledge do you have of the course that has prepared you for the race? "At our test last year, I only got 10 laps so it wasn't enough for me to get comfortable with the track. However, during the IMSA GT3 official tests, I got to drive the car and really focus on learning the track, so I'm much more comfortable now. I am lucky that the team has provided us with two fast drivers who were there to help us out and help us get faster as the day went along. I have also watched videos to prepare myself for my first race at Sebring. It is definitely one of the most difficult tracks when looking at the technical aspect but also from the physical aspect. It is a track with a lot of tricky corners, which took time to learn, but because the track is so bumpy and you are almost constantly turning and driving the car on the edge, it is also hard physically. I think it is an awesome track and I cannot wait to be back for the first race."

Having competed with MOMO NGT Motorsport at Petit Le Mans last season and Daytona earlier this year, you have endurance experience with this team. How does the team work together to make it through long races? "The team has so far done an amazing job and I cannot wait to be back and work with them. I feel very comfortable and safe within their environment and every time I get in the car, I believe I do not only have a safe car but a fast car as well. One of the keys to the success of the team is communication, and we do a great job working together and communicating with each other."

Having not been one of the 18 GTD teams that tested at Sebring mid-February, what are your expectations for the new Porsche at the Sebring race? "We decided not to participate in the official IMSA testing in February and instead focus more on our car at the shop. We went over the entire car to assure that it will be very competitive for the upcoming 12 Hours of Sebring, and we feel confident that it will be."

In the three appearances that MOMO NGT has made at the 12 Hours of Sebring, the team has finished on the podium twice. What is the most important factor for repeating that success? "Sebring is our home track, yet I feel we have unfinished business there. This year is going to be tougher than ever, as we are competing against multiple manufactures and the field is huge with very fast drivers. We have a strong driver lineup and we'll make the best out of it. The rest, only time will tell."

At the last race, Daytona, the team had a very strong car and driver line-up. Technically speaking, what are you most focused on for this 12-hour event? "We had the fastest Porsche at Daytona in the GTD class during the race, we where three-tenths of a second faster than the rest of the Porsche field, and yet we couldn't keep up with Audi and Ferrari due to the Balance of Performance. IMSA came up with some new regulations for Sebring, which should close the gap but the question still remains as to how close the gap will be."