MOMO NGT Motorsport retires after incident during 12 Hours of Sebring 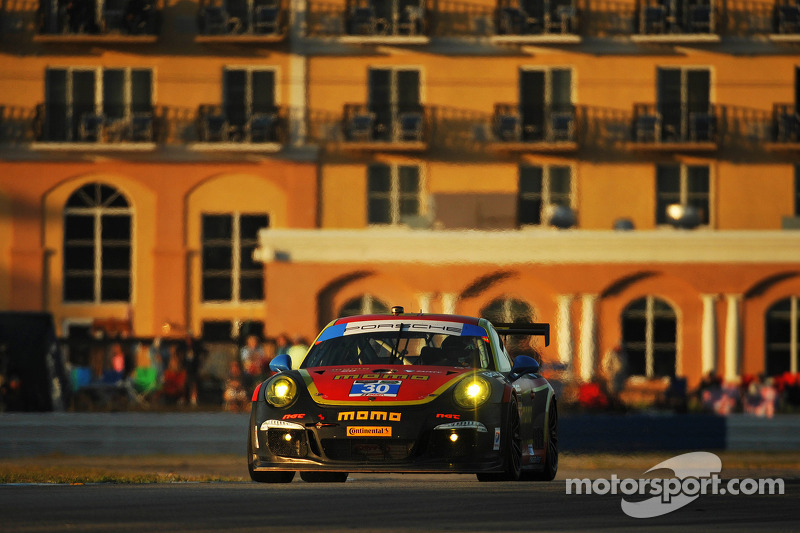 The No. 30 MOMO NGT car was forced to retire just before the three-hour mark due to damage from the on-track incident.

The MOMO NGT Motorsport team of Henrique Cisneros, Kuba Giermaziak and Christina Nielsen did not have the day they had hoped in Round 2 of the IMSA TUDOR United SportsCar Championship at the 62nd Annual Mobil 1 Twelve Hours of Sebring.

After experiencing gearbox issues during the morning warm-up prior to the race start, the No. 30 MOMO NGT Motorsport Porsche was forced to start the 12-hour enduro from the pitbox after not completing repairs to grid before pit lane was closed for pre-race activities.

Starting driver and Porsche ace Kuba Giermaziak had an impressive stint as he worked his way through the 25-car class field to lead the GTD entries before the one hour mark. He swapped the lead with several cars during his initial double stint. 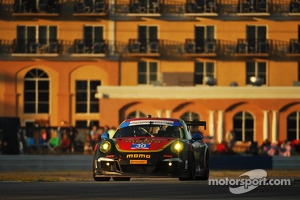 Giermaziak handed the car over to co-driver Christina Nielsen in the lead during the second caution of the race. Nielsen drove under yellow flag conditions for the majority of the beginning of her stint. Less than 10 minutes into the green flag racing, Nielsen had contact with the No. 62 Ferrari after it attempted to merge back into fast traffic from off-course. The No. 30 MOMO NGT car was forced to retire just before the three-hour mark due to damage from the on-track incident.

Kuba Giermaziak, qualifying driver of No. 30 MOMO NGT Motorsport Porsche 911 GTD: "We felt we had a really good car today. Unfortunately, we had some gearbox issues in the morning warm-up that forced us to start back further than our 11th place class grid position. We worked our way back to lead in GTD pretty quickly. Traffic was unbelievable but we had some good battles going. It's too bad that Christina was hit by another car on track because I believe we had a car that could win today."

Christina Nielsen, driver of No. 30 MOMO NGT Motorsport Porsche 911 GTD: "I got into the car under caution and drove most of my stint under yellow, so I didn't really get to push very much. I felt good in the car and like it was ready for long stints, which is important in endurance racing. Then we went back to green racing and just before I arrived at the first corner, a guy apparently went out in Turn 1 and hit the wall then came back on track. As he was coming back, I was approaching, and the speeds in Turn 1 are very fast. I had nowhere to go and it looked like he kind of stopped the car. He was rolling very slowly across the track so I went by and everything looked fine. I thought I had made it through because I couldn't see the car, and then suddenly, the car got lifted in the air and landed again and hit next to my rear tire. He went right into the side of my car."

Henrique Cisneros, MOMO NGT Motorsport Partner/Driver, No. 30 MOMO NGT Motorsport Porsche 911 GTD: "We were running a great race up until the incident. The strategy was right on and the car was running very well and we were leading the race for a while. Christina had just jumped in for her stint and unfortunately, a Ferrari went into the wall in Turn 1 and he was very impatient. He tried to rejoin the pack while all the cars were whizzing by and he had no place doing that. It was an unsafe release on his part and he should have waited for everyone to get by him safely before he pulled out into traffic. His impatience, unfortunately, caused two cars to get in an accident and it's a very dangerous situation. It was potentially a T-bone situation, so we're very glad Christina's okay. It's a shame when you put that much work and preparation into an endurance race for it to end this early."

Beaux Barfield, Team Strategist/Engineer, No. 30 MOMO NGT Motorsport: "We had a difficult start this morning in the warm-up because we had a gearbox problem which we had to fix. That made us late for the grid and required us to start from pit lane. Baffling to us all, we got a penalty for starting from pit lane so we had to serve a drive through to start the race. I guess the new series is learning what to do and penalizing somebody for already having problems is pretty baffling to me but I guess they will figure that out. Through strategy and awesome driving we got up to the front, which we pretty much expected going into it, so everything was pretty much going to the plan we laid out and then catastrophe struck. As big as the crash was initially that the Ferrari had all on its own, I was a little surprised at how long it took to put the yellow out because of the high-speed area like that. You tend to want to get shut down and get everybody safe and under control, but it did stay green. A driver, who is developing quite a reputation, decided to pull on track right in front of everyone, including us. There was absolutely no place for Christina to go. I feel terrible for her because she was doing a great job this weekend. To get tangled up in someone else's mess in the first few hours of such a long race is extremely unfortunate but it's part of what we do."

Ramez Wahab, NGT Motorsport Owner/No. 30 MOMO NGT Motorsport Team Manager: "The beginning of the race was actually pretty good. We had some gearbox issues last minute so we had to start of the back of the pack, which is not that big of a deal in a 12-hour race. After 30 minutes, we were running up front in class. For a moment, we were even leading the race. Our hopes were up, Kuba did an awesome job, and Christina got in the car for her stint. She did a couple of laps and the yellow flags helped us out. She did only two or three laps, and then in Turn 1, a Ferrari had an issue. It was a huge pileup, but Christina thought she made it through. She even said 'Oh, thank goodness, I went through,' and at the last moment, she was hit by the Ferrari. We had to retire the car, but it was not Christina's fault. That could have happened to anyone and she handled it the best she could."