Sebring, FL – Frankie Montecalvo and Gunnar Jeannette will have a legion of new fans for their TUDOR United SportsCar Championship PC class assault in 2014 after teaming up with Camp Boggy Creek - the Florida-based camp for seriously ill children.

Starting from this week's Mobil 1 Twelve Hours of Sebring, Montecalvo and Jeannette's' PR1/ Mathiasen Motorsports ORECA PC car will appear in Camp Boggy Creek livery for the remainder of the 2014 season.

The legendary actor and racer founded Camp Boggy Creek in 1996 with General H. Norman Schwarzkopf. The Eustis, FL facility is part of the SeriousFun camp network which was also founded by Newman.

Jeannette made his professional debut in 2000 driving a Porsche at the Rolex 24 driving with Newman. He drove a number of races with the acting great early in his career including several with liveries promoting camps for sick children.

The Camp Boggy Creek PR1/Mathiasen Motorsports livery was unveiled at the camp on Friday with a number of former camp attendees revealing the new livery with Montecalvo and Jeannette.

The American young sports car stars made their return to US competition after spending the past two seasons competing together in the FIA World Endurance Championship and the European Le Mans Series.

They made their debut with PR1/Mathiasen Motorsports at the Rolex 24 at Daytona with Michael Guasch and David Cheng - finishing fourth. Guasch will join the team for this week's Sebring event.

Since 1996, Camp Boggy Creek has made it possible for children with serious illnesses to enjoy a camp experience in a safe, medically-sound environment. Located just a short drive from Orlando, Florida, the 232-acre camp serves children ages 7-16 who’ve been diagnosed with chronic or life-threatening conditions. 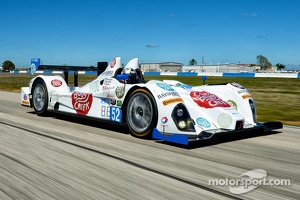 "When I raced with Paul, quite a few years ago now, we had a couple of cars that were involved with the camps. Having the opportunity to race with Paul and what he did for my motorsports career, the camps have a very special place in my heart.

"To get to go to the camp and launch the car and see the reaction of the kids... It's very special. It's hard to put into words. The camp offers the kids such a great place to kind of get away from their illness and not worry about other things, other than just having fun and being a kid.

"To see their eyes light up when we put them in the race car and started it up, in my opinion, is really what the camps are all about. It's about getting them to forget about the other things they're dealing with and to bring them and their families together for us to become a small part of that.

"To help make Boggy Creek more recognizable is really cool and I'm very much looking forward to the year."

FRANKIE MONTECALVO - Driver #52 PR1/Mathiasen Motorsports: "We're really excited to be partnered with Camp Boggy Creek. We were going around looking for a charity that we thought would be suitable for painting the whole car up in.

"We couldn't have thought of a better charity to do it with. We got out there and saw the kids eyes light up when they saw the car. It really made a big difference. It was very, very cool to get out there and have the kids pull the cover off the car for the first time and see it, and to have them represented on the car.

"Our team just got larger with a bigger fan base with all of the kids. I'm really excited and looking forward to this season. It's going to put a little more pressure on us because we're going to have to do good for those kids.

"Bayshore Recycling is very excited to be partnered with Camp Boggy Creek. Just to share the message of recycling and sustainability and looking for a brighter and greener future. Look out there for #RaceRecycle."

SARAH GURTIS - Camp Boggy Creek, Corporate Development Officer: "It was such a treat to have the team here with the car. We had nine campers at the unveil with their family and siblings. To watch their faces as they unveiled this car was phenomenal.

"Those kids now have a car out on the race track. Obviously it's going to be shown for the first time at Sebring but we're thrilled it's going to run the rest of the season.

"The Bayshore family of companies surprised us with this and it's just an amazing and generous thing for them to do. Obviously we serve kids throughout Florida with serious illness. No camper or family pays to come. We're open year-round and have been associated with sports car racing previously with GRAND-AM Road Racing.

"We're now so thrilled to be a proud charity of IMSA and so tickled to have this car in the TUDOR United SportsCar Championship. We wish them well. They've just got a whole new legion of little kids that are going to be watching on FOX Sports 1. It's going to be an amazing thing for our families to share, so thank you to all of them.

BOBBY OREGEL - Team Owner - PR1/Mathiasen Motorsports: "It's pretty awesome how it all came about. Our program was put together late for Daytona but we used everything in our power to make this happen in a short period of time.

"It's great to work with the camp in this capacity with Frankie and Gunnar. With the history of the camp with Paul Newman, it's a great thing to be involved with.

"I hadn't been to the camp before and I have to say that it's touching. I'd love to come back."

SCOTT ATHERTON - IMSA President and COO: “The partnership between Camp Boggy Creek, PR1 / Mathiasen Motorsports and Bayshore Recycling reminds us all how fortunate we are to get to compete in a sport we love and how important it is to give something back.

“IMSA’s charitable endeavors, which also include the Austin Hatcher Foundation, are a key component to our overall business model. The eye-catching livery is sure to grab a lot of attention this week at the Mobil 1 Twelve Hours of Sebring Fueled by Fresh From Florida and throughout the rest of the season.”