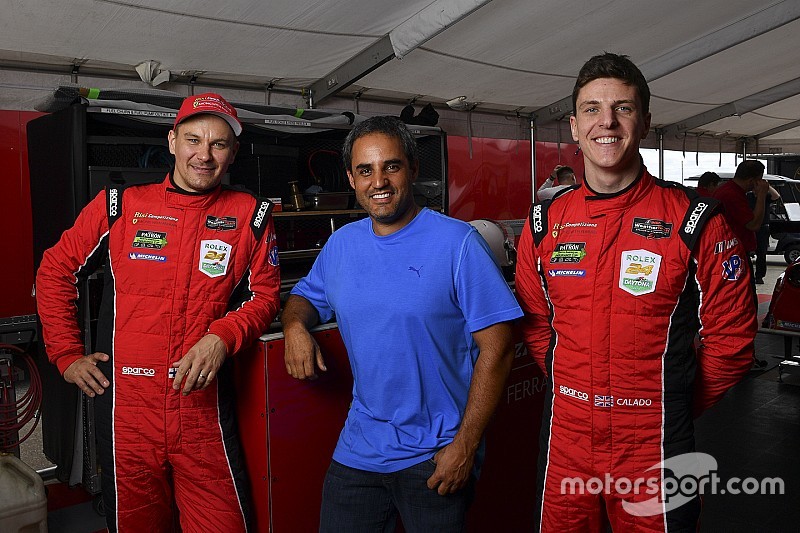 Juan Pablo Montoya has admitted he’d be interested in racing for Risi Competizione if he got the opportunity, after testing the team’s Ferrari 488 GTE at Sebring today.

The Colombian joined the team on the second of a two-day test for the IMSA WeatherTech SportsCar Championship, as teams prepared for next month’s Sebring 12 Hours.

The 1999 CART Indy car champion and two-time Indy 500 winner retired from fulltime IndyCar racing at the end of last season, and has committed to racing a fifth Penske-Chevrolet at Indy this year. However, he’s also being strongly linked to a drive in a Penske-run DPi prototype in 2018, possibly using Honda power.

Montoya took the wheel of Risi’s 488 soon after lunch, and afterwards declared: “It’s fun, it’s different. I only ran, probably, eight laps just to get the hang of it a little and I’m going to try to get in a little bit later.

Montoya, a three-time winner of the Rolex 24 Hours at Daytona, compared the Prototype experience with that of a GT car, saying: “Prototypes drive more like an open-wheel car. This is very different. There’s a lot of pitch movement in the cars, it’s kind of tricky.

Asked if he would be interested in racing the Risi Ferrari, he replied: “If they let me, yeah. But I don’t know if they’d let me.”

The Risi team already has confirmed plans to field the 488 for Toni Vilander, James Calado and Giancarlo Fisichella at Sebring, with Vilander and Fisichella expected to be the team’s full-timers in the meat of the WeatherTech Championship.

Lynn positive after first test in a Cadillac DPi-V.R