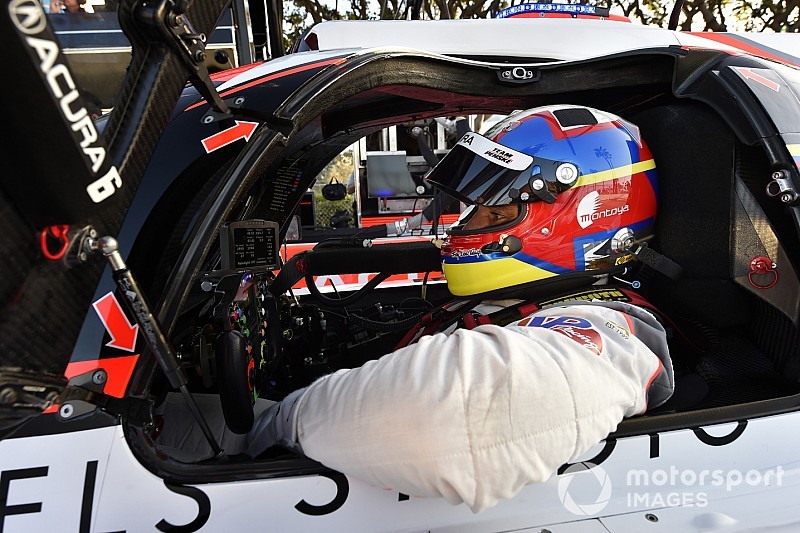 Appropriately the Acura Team Penske ARX-05 of Juan Pablo Montoya set fastest time in the opening session for this weekend’s Acura Sports Car Challenge, the fourth round of the 2019 IMSA WeatherTech SportsCar Championship.

With off-and-on rain keeping the 2.258-mile road course soaked, the Prototype’s laps were around half a minute off Helio Castroneves’ pole position time from 2018, but a lap of 1min41.568sec kept Montoya ahead of the best of the GT Le Mans class cars which enjoyed a rare moment of prominence. However, Montoya did stop on track just before the Prototypes received the checkered flag.

Earl Bamber was second overall in the #912 Porsche 911RSR, ahead of the BMW M8 of Tom Blomqvist.

Thus Colin Braun was second in class but only fourth overall in the CORE autosport-run Nissan DPi, some 3sec off Montoya’s benchmark, but ahead of the second Acura of Ricky Taylor.

Oliver Gavin’s third place in GTLM was enough to place him sixth overall for Corvette Racing ahead of the second Porsche of Patrick Pilet.

Fastest of the GT Daytona runners and eighth overall was Trent Hindman in the #86 Acura NSX run by Meyer Shank Racing, 0.4sec ahead of Zacharie Robichon’s best effort tin the Pfaff Motorsports Porsche 911 GT3 R, and Alex Ribeiras in the Moorespeed Audi R8.

Jack Hawksworth ran the AIM Vasser-Sullivan Lexus RC F into fourth ahead of Bill Auberlen in the BMW M6 of Turner Motorsports.

Second practice is due to start at 3.15pm local (Eastern) time.