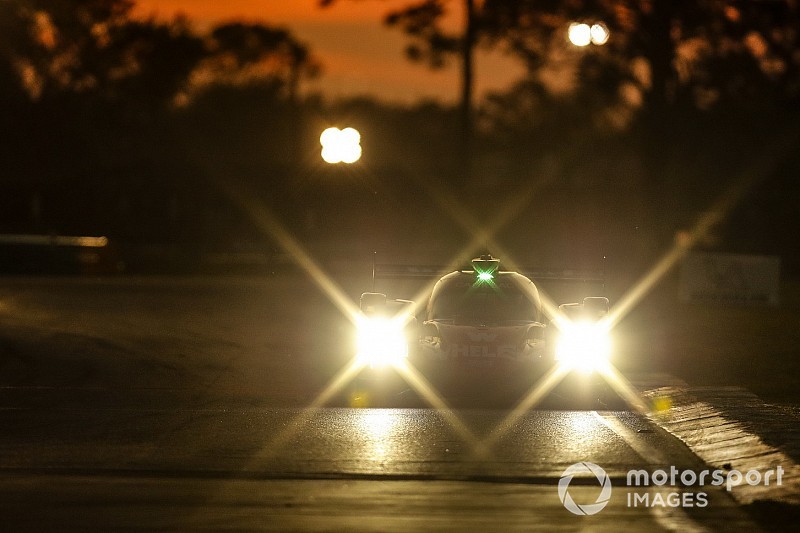 An apparent transmission issue for Parker Chase’s GTD Starworks Audi R8 as the end of Hour 10 approached cracked open the door to Victory Lane a little in the Prototype class, as a full course caution brought the #5 AXR Cadillac and the #10 Wayne Taylor Racing entry back into play.

But in terms of pure pace, Nasr and Derani have been class above all the rest and had a lead of 45sec over their teammates before the yellows flew.

In fourth place is Colin Braun in the CORE autosport Nissan chased by Ricky Taylor in the #7 Acura Team Penske ARX-05, both of which took advantage of the caution to get back on the lead lap.

Stephen Simpson fell off the road in the #84 Cadillac of JDC-Miller but recovered without causing a caution and is being chased by the Mazda RT24-P of Harry Tincknell.

Ford lead wiped out in GTLM

In GT Le Mans, Ryan Briscoe had his half-minute advantage – earned by Richard Westbrook in the previous stint – reduced to 6sec under yellow.

His nearest pursuer is Mike Rockenfeller in the #3 Corvette C7.R but the German will have his hands full on the restart with the #66 Ford of Joey Hand, tucked up his tail pipe.

By dint of not pitting under yellow, Katherine Legge leads GT Daytona for Meyer Shank-Heinricher Racing in the #57 Acura NSX GT3, pursued by Jeff Westphal’s Scuderia Corsa Ferrari 488, Trent Hindman in the second MSR NSX and Felipe Fraga in the Riley Motorsports Mercedes.

The Pfaff Motorsports Porsche that led for much of the opening part of the race has been hindered by suspected ABS failure and has dropped outside of the top 10 in class.

Performance Tech holds a 14-lap advantage over PR1/Mathiasen in the two-car LMP2 class.

Sebring 12 Hours: Nasr holds off Taylor to win for AXR