Sebring, Fla. – On one of the toughest days of racing there is, Michael Shank Racing with Curb/Agajanian fought back to take a lead-lap finish in the 62nd Annual Mobil 1 Twelve Hours of Sebring Fueled by Fresh from Florida on Saturday. 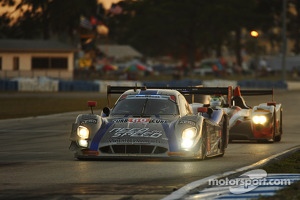 The team started the race on the back foot—or more accurately the back row—after not getting the chance to have Negri complete his night laps in practice on Thursday. That engendered a back of the pack start per the regulations.

But the quick Brazilian knows the track better than anyone else, and was rapidly up in contention as the green flag flew under perfect conditions. Turning the car over to Pew after his rapid escalation in the ranks, Negri knew the Need for Speed car was in good hands.

Pew hadn’t been to the track in several years, but the memories were clearly not too diminished as the Florida resident was on the pace and kept the team motoring in the top-10 through a race that lacked a rhythm in the early stages. After Pew moved up to fifth, he turned the car over to Wilson to take the controls.

Looking like the recent Sebring regular that he is, racing in podium position as the race entered the four hour mark. With Pew taking over through a disjointed section of yellow flag running before a setback struck the team just past the halfway mark.

An electronic issue had mechanical ramifications, but quick change of ECU meant that the transmission was working once again. Despite the quick fix by the team, the stop unfortunately happened under green flag conditions, which had been rare up to that point. Losing laps forced the team into an alternate strategy to fight back and make up the two laps lost.

Working the traffic, the pace, and the caution periods that were far less frequent in the second half of the race, the team managed to do just that, getting back to the lead lap and ready to fight to the finish when the final green flag flew with just 20 minutes to go.

Unfortunately, the Need For Speed Ecoboost-powered car just didn't have the pace and track position to move any further forward, with Wilson bringing the car home ninth at the finish. With a record nine cars on the lead lap completing some 291 laps, it was one for the books.

Mike Shank: “What a long day! We fought from our heels the entire time. We definitely could have finished better than that but we had an ECU problem on our gear box that really hurt us; put us down two laps. We fought from 60th to third, we fought from two laps down back on to the lead lap... it was just one thing after the other. I'm happy for Chip Ganassi Racing and Ford. This is a big deal for Ford to win this race and I'm proud to be a part of their program and proud for their win.”

Ozz Negri: “The car felt good. We're still missing that dive plane; we got understeer through the fast parts. They asked me to save fuel, but at the same time go fast! I was able to save the fuel that they wanted by managing the revs. We were able to get the fuel mileage that we needed. This race is tough. It's one of the toughest races I have ever done. But I tell you what, if we had a little better luck with a yellow, we had a car for a podium finish.”

John Pew: “There was a really long yellow during my stint so there was a lot of pick up on the tires. It took me quite a few laps after we went green to get that all off and get the grip back. But after that it started to get better. Then at the very end of the stint, the rear tires were starting to go. I was passing a GT coming out of the Water Tower and we both bobbled a little bit and I spun the car around. I've done that a lot in the night in that same spot. I know how to not hit the wall really well! I didn't hit anything this time either so I was able bring it back to the pits to give it to Ozz. It was still pushing in all the high speed stuff and little loose on turn in to some of the slow speed but other than that the car wasn't bad.”

Justin Wilson: “Like Barry (Waddell, spotter) said, we started half a lap down and we finished half a lap down. We had that problem with the gear box. I don't know what they did (with the repair); they messed around at the back of the car and then it worked again! I don't know if there was a piece of rubber that got in there and stopped it from shifting. We were just trying to recover from that and get our lap back and we finally did it but we couldn't quite get to the front. It was fun. A long, tough day, but we’ll try again next year. I knew we had a chance if we could get back toward the front. I guess it wasn't our day. Things never quite fell the way we needed them to. We always seemed to be right on the tail end of that lead lap and fighting to stay ahead.”

RSR Racing finishes on the Podium at historic Sebring event