Neel Jani trying to add another sportscar jewel to his crown 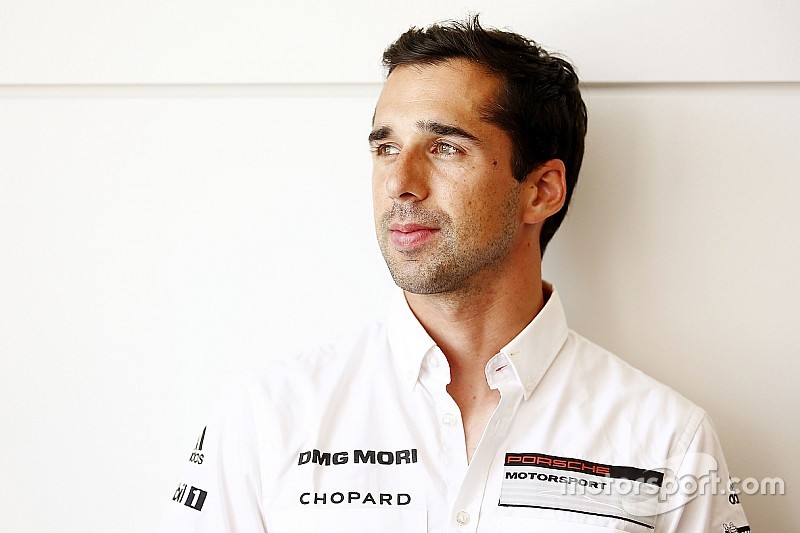 World Endurance Champion with Porsche, Neel Jani will be making his Rolex 24 debut this month in Rebellion Racing’s new Oreca-Gibson. David Malsher asked him about his realistic hopes and what he thinks of the Daytona road course.

Neel Jani is among the present-day sportscar elite, and this should surprise no one. His pace in open-wheel racing, I always felt, was somewhat underappreciated.

Jani won twice in GP2 in 2005 and finished seventh in the championship with Racing Engineering, a team that was not yet the top squad it has become. In a brand-new series of apparently spec cars, that made a difference, especially in a grid so deep with driver and team talent.

Jani then had a different problem in A1GP, but with the same outcome. The nature of the series meant that driver level was difficult to judge and would vary from event to event, and the regs allowed for few car adjustments, so again, how were we supposed to assess him? Safe to say that you don’t score 10 wins, nor lead Team Switzerland to the 2007-’08 championship, if you’re short of talent.

In Champ Car in 2007, Jani’s talent was easier to evaluate. He had a delightfully fluid driving style, and it’s no surprise that his best performance, finishing runner-up to Will Power in Toronto, was achieved in the wet. Often this ease on the steering wheel counted against the rookie, however. One of his engineers explained to me during the season that Jani’s qualifying performances were sometimes hurt by failing to put enough hard loads through his tires on his warm-up laps, so he didn’t quite have that last percent of grip on his flyer.

And I well remember at Las Vegas, Jani’s CCWS debut, when the team manager of PKV Racing asked me to print out for him the lurid LAT images of Power, Paul Tracy and the late Justin Wilson monstering the curbs. He wanted to show Jani how these brutish cars needed to be driven on a street course to get the best out of them. PKV’s star driver was, in short, being too kind, too mechanically sympathetic.

But the 24-year-old learned. By season’s end, Jani had three podium finishes to his name, including Cleveland and San Jose – one bumpy, the other very bumpy – and he finished ninth in the championship. However, his heart remained in Europe.

When Jani’s Formula 1 dreams fell through over the next few years, I knew all his talents – including that delicate touch – could bear fruit in sportscar racing, and I was delighted to be proven right. Rebellion may have been left without much of a cause in WEC, taking the valiant but vain fight to the works teams, but in IMSA, the Swiss team’s victories at Petit Le Mans in 2012 and ’13 – with the lineup of Jani, Nick Heidfeld and Nicolas Prost – were emphatic.

And Jani’s subsequent hiring by the returning Porsche works Prototype team in 2014 was no less than his ability deserved. Like most objective observers, my heart broke when Toyota broke in the dying minutes of the 24 Hours of Le Mans last year, but I was also happy for Jani – a decent and humorous man as well as a talented and previously unlucky driver – that he was one of the prime beneficiaries. The fact that Le Mans victory led to him also being crowned World Endurance champion was the fondant in the Swiss roll.

And now it could be prime time for Jani to add that other 24-hour classic to his résumé, thanks to Porsche allowing its drivers to participate in extra-curricular activity in the off-season. This perhaps is deliberate encouragement to blow off the rust, since the WEC season doesn’t start until April, and the fact that Toyota has done the same with its WEC drivers, means Rebellion has been able to assemble a great driver lineup for its single-car, one-off entry for the 55th running of the Rolex 24 Hours at Daytona. In fact that combo of Jani, Heidfeld, Sebastien Buemi and Stephane Sarrazin is surely the best on this year’s grid.

But how does Jani himself rate his chances of conquering the Daytona International Speedway 3.56-mile road course on his first attempt?

“I think we have a great driver lineup in terms of experience and speed,” was his immediate response to Motorsport.com, as he headed home following the three-day Roar Before the 24 test at DIS last week. “My three teammates are proven winners. And the car also did a lot of laps.

“Stephane crashed in testing so the team had to build a car from a new chassis for this test. They just finished in time for Practice 1 – and yet the car was completely without any issues, all test long. Knock on wood!

“So reliability was good, and as we all know, that is the most important thing for a 24-hour race.”

Well, yes… but pace is important, too. If both the hare and the tortoise are going to reach the finish line without unscheduled pause (paws?), the smart money is still on the furry long-eared fella, every time. And in that regard, Rebellion is looking good. The #13 Oreca-Gibson was fastest on Friday and Saturday, while on an inconclusive weather-affected Sunday, it was third – less than one-tenth behind the similar car of DragonSpeed.

But Jani is decidedly wary of the figures revealed on the timesheets last week, apparently convinced there is plenty more to come from the two Cadillac DPi-V.Rs run by reigning IMSA champions Action Express Racing and Wayne Taylor Racing’s similar machine.

“In terms of speed, we were right up there, but I wouldn’t say we are the guys to beat,” mused Jani. “The Mazda showed good pace [just 0.02sec slower than DragonSpeed]. And the Cadillacs… Let’s put it this way, they were surprisingly slow. It was a little unreal, when we followed behind them. A bit strange, I would say.

“So that’s why I’m not reading too much into lap times yet. We just did our program and focused on getting our best preparation done, and we can’t judge what the others did. We don’t know what they did or didn’t show, so judging competition is too hard at this point. Our main thing was reliability and our own performance.”

Jani expressed confidence in the chemistry between he and his co-drivers. As an ex-open-wheel racer for whom teammates were once his most direct point of comparison and competition, he will recall how selfish he once needed to be, how much he wanted a team to be centered on his own driving preferences when setting up the car.

Several years of partnering strong drivers in endurance racing have taken the edge of that intrateam necessity to be kingpin, and have given him the perspective of working for the common good. The 33-year-old expresses his faith that Buemi, Heidfeld and Sarrazin – who range in age between 28 and 41 – are also at a point in their respective careers where they can share that altruistic outlook.

“I think also that we know how to drive a lot of different cars. We have a lot of experiences between us. That means we are adaptable to various driving styles and setups; we don’t need very specific setups to find our speed when we all share one car. I tested alone last Friday and Saturday [the other three were involved in Formula E’s Las Vegas eRace] and I think my setup preferences work well for the other drivers. Seb got in the car on Sunday and could go quickly, so I don’t think there’s a problem in that area.

“What we all need to do is still work on the car, develop a little more, and get to know it a bit more. It is a completely new car and so none of us are experienced in it yet.”

Despite having that Oreca all to himself for two of the three days in the Roar test, including laps in the dark and in the rain, Jani will gladly soak up all the Daytona on-track experience he can get. He – like compatriot Buemi and Swiss-based German Heidfeld – has never raced at DIS before. Sarrazin, meanwhile, has only one Rolex 24 start under his training wheels. Talent, it seems, will have to compensate for track knowledge among the Rebellion gang.

“When I saw the banking from the oval part of the track, I thought, ‘Gee, that’s steep… really steep,’” Jani recalled, “and when you drive on it, for the first couple of laps it feels strange. But like anything, you get used to it, you adjust things, start to play around. I didn’t go three-wide yet in traffic, though. We’ll save that…

“Then the infield is basically just two hairpins, plus two wider hairpins – one increasing radius, one decreasing radius – and they’re bumpy, and you’re just trying to survive. But the rest of the course is quick, interrupted by the Bus Stop chicane, and you’re focusing on trying to not lose too much time in traffic.

“But we have help though. It was quite an experience to work with a spotter – never done that before. [In 2007, Champ Car had no ovals on its schedule.] The problem is that you start to like it and you don’t want to race without a spotter any more!”

Mention of traffic, of course, prompts comparisons with Le Mans. Aside from Daytona’s 24 being held under floodlights, the other primary difference between the two races is track length, La Sarthe being five miles longer. Scott Dixon, a Rolex 24 winner but Le Mans virgin last year, compared the two, stating: “You can be on the two-mile Mulsanne Straight (divided by two chicanes) and you don’t see anybody – no lights, nothing. But because it’s only three-and-a-half miles and there are 70 cars, [Daytona] is a complete mess the whole time; you’re always lapping someone.”

Jani agrees the two races are very different but suggests the endless traffic at Daytona may not be as hazardous as the more sporadic dealings with backmarkers at Le Mans, or anywhere else on the WEC calendar.

“Traffic is a lot different in this series compared with WEC,” he remarks. “In LMP1 cars like our Porsche 919, you really have to try and get past the GT cars and LMP2 cars before the corners, because our lap time is all about a clean exit and being able to use that huge acceleration from the hybrid unit.

"Here, in IMSA, traffic management is a bit easier because we don’t gain that much laptime whether it’s before or after the corner that we make the pass. You can take less risk in traffic in IMSA, because you are faster than the GT by the same amount in braking, in grip, in acceleration and along the straights. So we can choose more carefully where and how to make the pass.”

In deference to his fulltime employers, one would expect him to be extra-careful while lapping the works 911s in the GT Le Mans class, come the race, Jan. 28-29. But otherwise, rookie status notwithstanding, expect Neel Jani to show all the qualities that made him World Endurance champion last year.

Open-wheel racing’s loss has been sportscar racing’s gain. Porsche knows that; Rebellion is about to be reminded of it.

DragonSpeed ends Roar Before The 24 on top