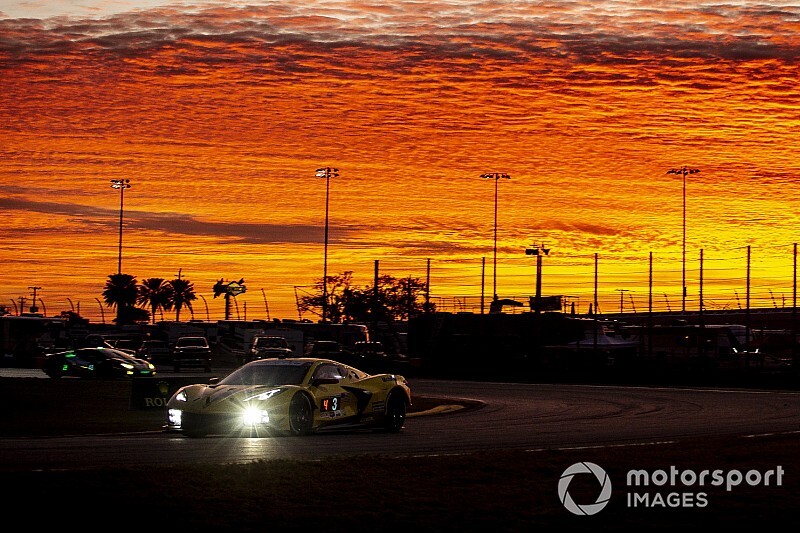 After a strong race debut for the new mid-engined Corvette C8.R in the Rolex 24 Hours at Daytona resulted in a fourth place, star driver Antonio Garcia said he expects the car to visit victory lane soon.

The Corvette didn’t quite have the consistent pace of the newest version of the Porsche 911 RSR, nor the GT Le Mans class-winning BMW M8, but it was close enough to be contending for a podium finish due to an off-strategy plan. Indeed, the #3 C8.R’s fastest lap, set by Jordan Taylor, was 0.2sec faster than the best effort from the quicker of the two Porsches.

The #3 car’s primary problems came when the line-up’s endurance ‘extra’ driver Nicky Catsburg, who had hitherto been very impressive, had a collision with a GTD Aston Martin on the banking, and spun to a brief halt in the Turn 1 run-off. Later, the car had another spin at NASCAR Turn 4 but again restarted.

Said Garcia: “I'm proud that at least one car finished near the lead lap. For sure every time out we want to win and do the very best possible. Today, this was the best possible result. Probably we didn't have enough pace to be on the podium or to win.

“Once we lost track position and not having many yellows, we had to react to that and be aggressive on the strategy. A yellow would have put us a little ahead and maybe given us a chance to fight. But I'm proud that we gambled and tried to do better than what we actually might be. Instead of being comfortable with fourth, we went to try and win it.

“It wasn't a win, but I'm sure that knowing how it reacts and how much room there is for development, this Corvette will be a winning machine before long."

Said Taylor: “I think it is impressive to have a finish like this. It's always difficult with a brand new car and limited testing to go 24 hours without issues. That's a testament to the team, Corvette Racing, Pratt & Miller, the Corvette brand and everyone that is behind this program.

“It's a good start to the season. Obviously we wanted to be on the podium or win the race, especially when you have a flawless race. If you would have told us two weeks ago that we would have no issues all the way through the race, we would have taken that all day long. I'm excited for the rest of the year."

“There isn't much to be disappointed about,” said Catsburg. “All the people that worked on this Corvette, tested the car, developed it... they can be proud. To come to Daytona for the first time with a car this new and being in contention to win for a long time is quite remarkable. I've seen it happen in a very different way in the past. It's something to be proud of.

“It's not so nice to finish just off the podium in P4. But we can be happy with this first event. We have some time and work to do in order to improve for Sebring.

“From my personal standpoint, this is a great team, a very nice car and very nice people. I really enjoyed it.

“Personally, I'm somewhat in the middle about my performance. I'm happy with the pace. There were some small mistakes that shouldn't have been there. But in the end, we can all be quite happy."

Jim Campbell, GM’s US VP performance and motorsports, said: “It was a tremendous honor to debut the Corvette C8.R at the Rolex 24 Hour at Daytona – 22 years after we debuted the C5-R in the same location

“I'm so proud of our team and how they prepared and executed the race with the 2020 mid-engine Corvette. I can't wait for the rest of the season and watch the excitement from our fans grow with every race."

“The Rolex 24 At Daytona is a demanding race, so to even finish here with a brand-new car with a brand-new engine is a major accomplishment,” said Mark Kent, Chevrolet director of motorsports competition. “To have both of the new Corvette C8.Rs finish – and one of them nearly finish on the lead lap – is a tremendous reflection of the strength of this car and this program.”

The #4 Corvette was also running in the top five until an oil leak approaching the ninth hour sent the car back to the garage and required the engine to be removed.

However, the 2016 Rolex 24 winners Oliver Gavin, Tommy Milner and Marcel Fässler rejoined the race to treat it as a test, trialing setup “evaluating tire settings and setup options to help the #3 for the end of the race.”