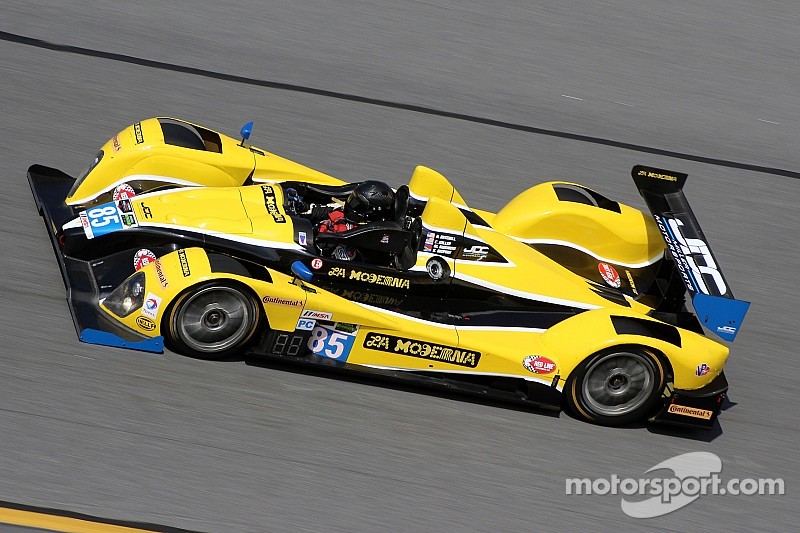 The exciting action of the 2015 Cooper Tires Prototype Lites Powered by Mazda gets underway with two rounds March 18-20 at Sebring International Raceway.

Mission accomplished yet again in 2014, as runaway Lites 1 class champion and double Sebring winner Mikhail Goikhberg has graduated to the Prototype Challenge class of the TUDOR Championship in 2015 with the team with which he won the title last season, JDC Motorsports.

Goikhberg is the third consecutive Cooper Tires Prototype Lites Powered by Mazda title winner to climb to the TUDOR Championship. Goikhberg received a prize package worth $100,000 presented to the series champion by IMSA, including an entry in the Prototype Challenge class of the 2015 TUDOR Championship.

2013 champion Sean Rayhall earned two victories and five podium finishes in his first year of competition in the PC class in 2014, while 2012 champion Tristan Nunez completed his first season as a Mazda factory driver in the Prototype class in 2014 after racing in the PC class of the American Le Mans Series and the GX class of the GRAND-AM Rolex Sports Car Series in 2013.

Now it's time for the next generation of future TUDOR Championship prototype stars to emerge in the 10th season of the Cooper Tires Prototype Lites Powered by Mazda.

The 2015 season starts March 18-20 at Sebring International Raceway as part of the prestigious Mobil 1 Twelve Hours of Sebring Fueled by Fresh From Florida race week.

Nimble, high-tech, purpose-built Lites 1 machines pack in the power with a 230-horsepower, 2-liter Mazda engine designed to prepare aspiring professionals for prototype competition in the TUDOR United SportsCar Championship and offer a challenging environment for mature semi-professional drivers, including competition in a Masters Championship. Equally capable and cost-effective Lites 2 machines offer new competitors a perfect introduction to the world-class competition offered by IMSA.

While Goikhberg will compete in the Prototype Challenge class in the Mobil 1 Twelve Hours of Sebring Fueled by Fresh From Florida, a host of returning and new drivers are looking to take the top spot on the podium at Sebring to kick off a championship run.

Falb will be part of a four-car Masters (age 40 and older) attack for Las Vegas-based ONE, including a Lites 1 machine for newcomer and former Radical Cup champion Gerhard Watzinger of Miami, successful Silicon Valley tech executive Dave House and 2014 Lites 2 race winner Todd Slusher. Don't be surprised if Las Vegas housing developer Slusher contends for the Lites 2 championship in 2015, as he won three of his eight starts after moving to the class near the midway point of last season.

McMurry, 17, from Phoenix, finished sixth in the championship standings in 2014 with his first career victory at Road Atlanta. He made history last June when, at age 16, he became the youngest starter and finisher in the history of the world's most prestigious sports car race, the 24 Hours of Le Mans. McMurry, son of former American Le Mans Series driver Chris McMurry, also raced in the European Le Mans Series last year.

Koch, 19, won the Mazda MX-5 Cup championship in 2014 and will climb another rung in the Mazda ladder system this season in Prototype Lites. Toppe, 17, jumps to the series after winning a race and finishing eighth for JDC in the Cooper Tires USF2000 Championship powered by Mazda open-wheel series in 2014.

Nico Jamin, 19, is another promising driver on the open-wheel ladder also racing in Cooper Tires Prototype Lites Powered by Mazda at Sebring. USF2000 competitor and reigning Cooper Tires Winterfest champion Jamin, from Coconut Creek, Florida, is driving a Lites 1 car for ANSA Motorsports, which also will field a Lites 2 car at Sebring for series veteran Ludovico Manfredi, who lives in Key Biscayne, Florida.

Another young driver with a familiar name to Sebring fans who is expected to compete this season in the Cooper Tires Prototype Lites Powered by Mazda is Skylar Robinson, who will drive a Lites 1 car fielded by standout North American sports car team Extreme Speed Motorsports. Robinson, 18, from Augusta, Georgia, is the son of former Nissan factory driver and 1989 Twelve Hours of Sebring overall winner Chip Robinson.

Another teenage driver, McKay Snow of Pleasant Grove, Utah, will be a teammate to Robinson in another Lites 1 car fielded by Extreme Speed Motorsports. Snow is the younger brother of 2013 Porsche GT3 Cup Challenge USA by Yokohama champion Madison Snow, now a standout in the GT Daytona class of the TUDOR Championship who finished third in the Rolex 24 At Daytona this January.

Alon, from Encino, California, is one of the top returning drivers in the championship. He finished fifth in the standings last season, with two second-place finishes. Janco, from Key Largo, Florida, finished third in the Lites 1 Masters championship last season.

Versteeg, 16, from Sandy, Utah, will climb to auto racing after a title-winning career in karting.

Longtime series standout Comprent Motor Sports, which fielded the title-winning car for 2013 champion Rayhall, welcomes Tony Bullock to one of its Lites 1 cars this season. Former Radical Cup competitor Bullock, from Auburn, California, won one race in a partial first season of Prototype Lites in 2014.

Georgia-based Comprent also will field a Lites 1 car for series veteran Darryl Shoff and a Lites 2 car for Lee Alexander, a part-time competitor in the series last season who won an SCCA National championship in the CSR class in 2013.

Brian Alder will begin his quest for a third consecutive Lites 2 Drivers Championship at Sebring. Alder, from Dublin, Ohio, dominated Lites 2 in his BAR1 Motorsports entry last season with nine victories in 14 starts.

IMSA sanctions a seven-venue, 14-round schedule for the 2015 Cooper Tires Prototype Lites Powered by Mazda. The series will run 10 of its 14 rounds during TUDOR Championship events, including the season opener during the Mobil 1 Twelve Hours of Sebring Fueled by Fresh From Florida, providing plenty of high-profile visibility for teams and drivers at the largest sports car racing events in North America.

All events consist of 30-minute and 45-minute sprint races

This is the 10th season of the Cooper Tires Prototype Lites Powered by Mazda, and the opening two rounds at Sebring mark the 10th anniversary of the debut of the Élan DP02 chassis used by every competitor in the championship.