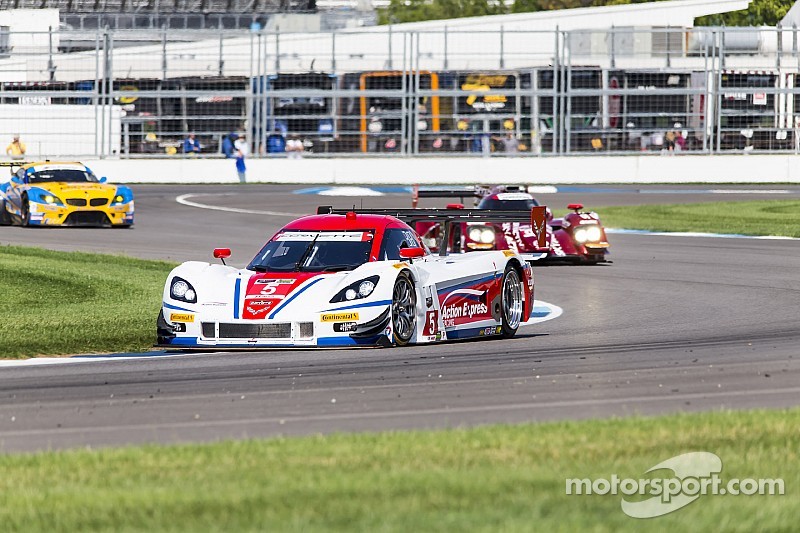 INDIANAPOLIS (July 25, 2014) — The No. 5 Action Express Racing Corvette DP team used outright speed to take the lead in Friday’s Brickyard Grand Prix at Indianapolis Motor Speedway and then used pit strategy to put an exclamation point on a day that ended with drivers Christian Fittipaldi and Joao Barbosa kissing the circuit’s famed “yard of bricks.”

Barbosa took the Prototype lead from Jordan Taylor with 48 minutes remaining and never looked back, maintaining a healthy lead for much of his stint while also conserving fuel. When the Prototype contenders hit pit road with less than 20 minutes remaining, Barbosa was able to stay out and took the checkered flag 48.964 seconds ahead of the No. 01 Chip Ganassi Racing Ford EcoBoost/Riley DP of Scott Pruett.

It was the second TUDOR United SportsCar Championship victory of the season for Fittipaldi and Barbosa after the duo opened the season with a victory in the Rolex 24 At Daytona. For Fittipaldi, the win came 19 years after he made his Indianapolis 500 debut in 1995, finishing second and earning Rookie of the Year honors in the event.

“Today was a nice win, even if it was 19 years after that,” Fittipaldi said. “It was a perfect day. All of the stars aligned, the team did an excellent job and hats off to them. I’m happy for the win, but I’m also happy to be in the lead of the championship again and still in the hunt.”

Pruett was one of the drivers who was forced to pit road for fuel in the closing stages of the two-hour, 45-minute race. He pitted the No. 01 machine with eight laps remaining, but as the other contenders followed suit, Pruett cycled back to a second-place finish for him and co-driver Sage Karam.

Karam, who was subbing in the event for regular driver Memo Rojas, had an up-and-down opening stint. Going into the first turn on the opening lap, Karam made contact with another Prototype, triggering a multi-car spin. It didn’t take long for Karam to settle into a groove, though, and he was able to drive his way back through the field, eventually taking the class lead.

The No. 90 VISITFLORIDA.com/GoPro Corvette DP driven by Richard Westbrook and Michael Valiante finished third to continue a streak of four consecutive podium finishes for the team dating back to Detroit Belle Isle in May.

The Prototype class next races in the Continental Tire Road Race Showcase Aug. 10 at Road America.

Jack Hawksworth and Bruno Junqueira may be better known in Indianapolis for their starts in the Indianapolis 500, but the two battled it out Friday for the TUDOR United SportsCar Championship Prototype Challenge (PC) class win in the Brickyard Grand Prix.

“The last 45 minutes were some of the most fun I’ve had in a race car, to be honest,” said Hawksworth, who finished 20th in the Indianapolis 500 this season, but finished seventh on the same IMS road-course layout in the IndyCar Grand Prix of Indianapolis in May. “I had a great battle with Bruno, fighting through the traffic. I enjoyed every minute of it. It’s a great circuit and I enjoyed it. To finally get a win here, it feels awesome.”

Junqueira and co-driver Duncan Ende made it a 1-2 finish for RSR Racing by finishing second.

It was a surprisingly quiet day for the points-leading CORE autosport duo of Colin Braun and Jon Bennett, who drove to a third-place finish, their fifth podium finish in six starts this season. The co-drivers still maintain a healthy points lead in the PC class after winning four races so far this season.