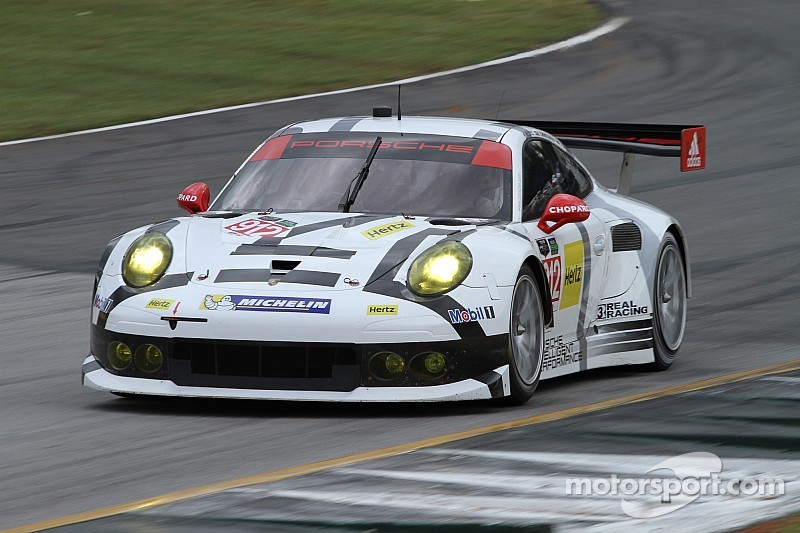 BRASELTON, Ga. – A lot can happen in a 10-hour endurance sports car race, but one thing is certain in the Petit Le Mans powered by Mazda at Road Atlanta: the GT Le Mans (GTLM) battle in the Tequila Patrón North American Endurance Cup will come down to the checkered flag.

The No. 912 Porsche North America Porsche 911 RSR made its charge early in the Petit Le Mans, leading at the four-hour mark to score the maximum five points in the segment and tie the No. 4 Corvette Racing Corvette C7.R (30-30) with two segments remaining. Coming into the event, the No. 912 entry was fifth in a tight GTLM points battle that featured six teams separated by two points.

The season-long drivers of the No. 912 Porsche 911 RSR, Patrick Long and Michael Christensen are tied with the No. 4 Corvette C7.R drivers Tommy Milner and Oliver Gavin for the driver championship.

The most dramatic moment in the race so far involved two other GTLM contenders: the No. 3 Corvette Racing Corvette C7.R and the No. 911 Porsche 911 RSR. The entire GTLM field pit for routine service while under a full-course caution at the two-hour, 30-minute mark. As the cars approached pit exit the No. 911 Porsche 911 RSR of Patrick Pilet made contact with the No. 62 Risi Competizione Ferrari F458 Italia of Pierre Kaffer triggering a chain reaction that also claimed the No. 3 Corvette C7.R of Jan Magnussen.

The No. 62 Ferrari F458 Italia retired from the race because of the contact, while the No. 3 Corvette C7.R and the No. 911 Porsche 911 RSR entries – both of which came into Road Atlanta trailing the No. 4 Corvette C7.R by one point in the Patrón Endurance Cup – returned to the race and are one point out of the top spot.

Both of SRT Motorsports’ Dodge Viper SRT GTS-R entries are also in contention, with the No. 93 entry two points out (30-28) and the No. 91 entry three points out.

Porsche extended its manufacturer lead to three points (41-38) over Chevrolet.

Points in the Patrón Endurance Cup – worth $100,000 to the GTLM champion team – are awarded at four hours, eight hours and the finish (five points for first, four for second, three for third and two for all other competitors in each segment).

AIM Autosport leads at segment one, clinches titles in GTD

The AIM Autosport team came into Saturday’s Petit Le Mans powered by Mazda knowing all it had to do to clinch the $50,000 Tequila Patrón North American Endurance Cup in the GT Daytona (GTD) class was start the 10-hour race at Road Atlanta.

The team did that and more, leading at the end of the first four-hour segment of the race to put an exclamation point on what’s been a tremendous season for the team’s No. 555 Ferrari 458 Italia in the TUDOR United SportsCar Championship endurance races.

Ferrari also clinched the Patrón Endurance Cup manufacturer championship by virtue of AIM Autosport’s win in the Rolex 24 At Daytona and runner-up finishes in the Mobil 1 Twelve Hours of Sebring Fueled by Fresh From Florida and Sahlen’s Six Hours of The Glen. Townsend Bell and Bill Sweedler will clinch individual driver honors by driving the minimum two hours, 15 minutes needed to score points.

Magnus Racing’s John Potter and Andy Lally were the only other driver pairing mathematically eligible to win the Patrón Endurance Cup, and finished fifth in the opening segment to trail by 17 points (42-25).

Petit Le Mans: A long day's journey into night, and then some