A few days before the official test sessions for the 12 Hours of Sebring, second round of the Tudor United Sportscar Championship, OAK Racing is pleased to confirm the three drivers who will share the Morgan Nissan LM P2 with Gustavo Yacaman during the 2014 season : Alex Brundle, Olivier Pla, and Ho Pin Tung.

Having already raced during the 24 Hours of Daytona, the young Colombian Gustavo Yacaman is OAK Racing’s full-time driver in this American series. The French team has chosen three talented racers to compete in the ten remaining rounds of the series, according to their respective sporting aims and racing calendars.

Frenchman Olivier Pla, who will also race in the World Championship with G-Drive Racing, run by OAK Racing, already took part in the 24 Hours of Daytona. He will cross the Atlantic a further five times this season, to take part in the longest races. An official test driver for the French team since 2011, he will be sharing yet another adventure with them.

Alex Brundle, who raced with the team during the 2013 World Championship, will share the car with Gustavo Yacaman during five events. The young British driver will also compete in the 24 Hours of Le Mans with the team. 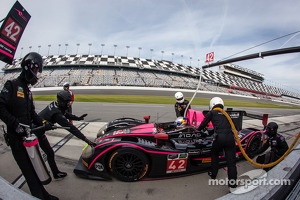 Finally, the team has just confirmed that Chinese driver Ho-Pin Tung will not only renew their joint entry in the Asian Le Mans Series, but also to compete in the 24 Hours of Le Mans and three rounds of the Tudor USCC.

In two days time, Gustavo Yacaman, Olivier Pla and Alex Brundle will meet up at the famous Florida circuit for two days of official testing before the 12 Hours of Sebring. After OAK Racing’s excellent performance in Daytona, where hopes of a good result were dashed by an alternator change during the race, the trio of Yacaman, Pla and Brundle can hope for a podium. The three drivers will be keen to show what the nr 42 Morgan-Nissan LM P2 car, produced by Onroak Automotive chassis and shod with Continental tyres, can do in America.

Philippe Dumas, Team Principal : “I am very happy to share this American experience with these four brilliant drivers. I am sure we will share some great times together and raise the colours of our Onroak Automotive chassis and France at the same time! Our performance in Daytona did not go unnoticed by those who count, and we intend to do even better during this second legendary race, Sebring.”