The 100-­‐minute race was marked by confident passing and fierce competition.

Following a hard-fought , sprint battle , the No. 42 OAK Racing Morgan-­‐Nissan LM P2 finished fourth in today’s Tequila Patrón Sports Car Showcase . The 1.968 mile venue was quite a change from the previous two events for Olivier Pla and Gustavo Yacaman.

The 100-minute race was marked by confident passing and fierce competition . The No. 42 car started the race in the fourth position and was able to maintain that for most of the race. This was also the first ;me that the French team had competed at Long Beach.

“We had a good fight today and did our best with the team strategy,” said Philippe Dumas, Team Principal. “We were able to add on more good points towards the championship. Both drivers did very well behind the wheel. We had an issue with the engine during the driver change because we couldn’t get the engine started. We will have to look into that because that’s the first time it has every happened. Also, it is very difficult for the Prototype cars to keep up with the DP cars, so we will have to speak with the series regarding that. Long Beach has been a great event and it was nice to see so many fans here supporting.” 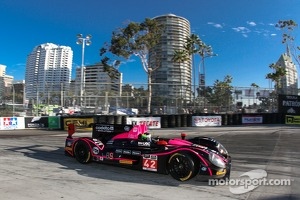 This weekend’s race was reserved for the Prototype and GTLM categories within the TUDOR United SportsCar Championship. It was a great experience for OAK Racing, as the Toyota Grand Prix of Long Beach was celebrating its 40th anniversary this weekend along with the Verizon IndyCar Series.

While this was Pla’s first outing on the famous California circuit, he had previous experience on other city circuits, which allowed him to adapt quickly in the Nissan-powered machine.

“This was my first time in Long Beach and it was a great experience,” said Pla . “The track was very good to run on and I was really looking forward to coming here. It was similar to when I raced on city circuits in Pau and Macao in Formula 3 and in Monaco in GP2. We had a very good qualifying result yesterday and Gustavo ( Yacaman ) did a great job at the start of the race keeping up with everyone. It was unfortunate that we couldn’t get the engine started right away after our driver change. I am still very proud of the team."

In addition to Olivier Pla , the team was also able to rely on the experience of Gustavo Yacaman . The Colombia native was no stranger to the circuit, having raced there four times prior while in Indy lights.

“It was a really hard race,” said Yacaman . “We had a power disadvantage when it comes to racing against the DP cars. Nevertheless, this made for a really competitive race. I drove really hard to try to make up as much ;me and positions as possible. I really enjoy these bumpy street tracks because they make driving very fun and challenging. Having raced here in the past, it helped me a lot to understand the brake points and passing opportunities. I really look forward to coming back here again and hopefully with a more competitive set of rules.”

The team will move onto the historical Mazda Raceway Laguna Seca in California next, which takes place May 3-­‐4.