After the long 24 and 12-­‐Hour endurance races at Daytona and Sebring the OAK Racing team is about to take part in the first sprint event of the Tudor USCC.

Olivier Pla and Gustavo Yacaman will share the wheel of the no. 42 Morgan-­‐Nissan LM P2 in the third round of the Tudor USCC in the streets of Long Beach. OAK Racing will have 100 minutes in the first sprint race of the season to clinch its maiden top-­‐3 finish in the American Championship . 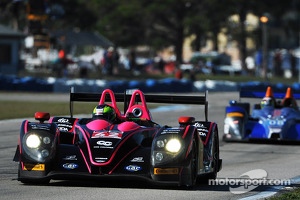 After the long 24 and 12-­‐Hour endurance races at Daytona and Sebring , which also count towards the Tequila Patron North American Endurance Cup , the OAK Racing team is about to take part in the first sprint event of the Tudor United SportsCar Championship season . The race reserved for the prototype and GTLM categories lasts 100 minutes on the famous Long Beach city circuit. The Californian layout in the streets of the seaside town measures 1.968 miles (3.167 km), which makes it a very tricky prospect for the drivers.

While it will be Olivier Pla’s first outing on the track , he already has a lot of experience of city circuits as he has raced in the streets of Pau and Macao in Formula 3 and in Monaco in GP2.

It is also a first for the French team, which can count on the experience of Gustavo Yacaman . The Columbian driver, who is doing the whole season with OAK Racing, knows the Long Beach layout as he has raced on it four times in Indy Lights. He loves city circuits, which demand very precise driving and traffic management skills between the walls bordering the track .

Strategy will be crucial and the narrowness of the streets of Long Beach will leave no room for mistakes . The whole team can’t wait to take up this new challenge, and is determined to shine on this legendary circuit this weekend, which celebrates the 40th Toyota Grand Prix of Long Beach, during which they will share the billing with the Indycar Championship , a veritable institution in the United States.

Olivier Pla : “Long Beach is a new test for me and for the team. Gustavo is the only one who’s familiar with the layout and his help will be vital. He knows the circuit and the race and he knows what we need on the spot, in particular concerning the setup of the car. It’s going to be pretty hectic : very little free practice, one qualifying session and a sprint race of one hour forty -­‐five minutes. Strategy will play a crucial role . It’s a very exciting new challenge!”

Gustavo Yacaman : “Long Beach is one of my favorite races of the year . Street circuits are my favorite kind of track . I have had great success on them in the past and I expect great success on them in the present . Our Morgan-­‐Nissan LM P2 has shown race winning potential over the past two events . We need to keep working hard as a team and the results will start coming . I am really looking forward to this race and hopefully to clinching our first podium of the year with OAK Racing and Onroak Automotive .”

Philippe Dumas, Team Principal: “ We’re tackling the third event , Long Beach, which counts for the 2014 Tudor United SportsCar Championship , with great pleasure and determination . This sprint event combining the prototype and GTLM categories is going to be very hectic and it’s great to share this weekend’s racing with IndyCar . Racing on city circuits with such a spectacle and the many spectators is what motor sport’s all about; that’s why we do this job. At minimum our aim is a top-­‐3 finish for the OAK Racing team and for our constructor , Onroak Automotive .”