While an engine problem spoilt the short 15-minute session, the team has analyzed it and its ambitions for the race are still intact.

In the first qualifying session for the TUDOR United SportsCar Championship held today on the legendary Daytona circuit, OAK Racing could do no better than the 23 rd -quickest time. While an engine problem spoilt the short 15-minute session, the team has analyzed it and its ambitions for the race are still intact. 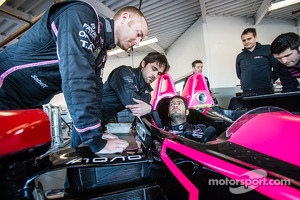 After very encouraging tests at the beginning of the month, work continued for the OAK Racing team. With the two free practices and despite a spoilt qualifying session, the French squad’s intentions haven’t changed, namely: to continue to find its marks in this new championship, get used to the regulations and get to grips with the new challenge of exploiting the Continental tyres .

At present it isn’t easy to see exactly where the team stands in this very rich field in terms of both quantity and quality, but 23 rd place is not representative of the potential of the driver line-up of Olivier Pla , Roman Rusinov , Gustavo Yacaman and Oliver Webb in the Morgan-Nissan LM P2 #42.

The reliability and the performance of the prototype from the workshops of Onroak Automotive has already been proved, and the team has pinpointed the technical problem met in qualifying. Thus, the drivers will be able to take part in the last two practice session, one tonight and the other tomorrow morning.

Starting from 12 th row of the gird on Saturday is obviously frustrating, but overall the team isn’t too worried. It’s going to be a very long race so the car has every chance of fighting its way back up the overall classification.

Philippe Dumas, team principal : “We had an engine problem during qualifying, and it’ll be put right for the nighttime session to give all four drivers a run and enable Oliver Webb to rack up some more track time. We have to stay positive and be thankful that it’s happened now and not in the race itself. We’re going to starting off for twenty-four hours so we know that qualifying doesn’t mean very much. With the times we set in the second free session we’re feeling pretty confident about our overall performance. Obviously, having our qualifying session spoilt is pretty frustrating, but that’s motor racing!”