In 2013, David Ostella never had stepped foot in a sports car paddock before winning the classic endurance event in central Florida.

MAPLE, Ontario (March 10, 2014) - David Ostella will join Performance Tech Motorsports this weekend for the 2014 Mobil 1 Twelve Hours of Sebring Fueled by Fresh from Florida in the TUDOR United SportsCar Championship Series . As reigning champ, Ostella will seek a sweet repeat in the Prototype Challenge (PC) category. 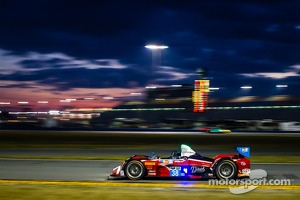 In 2013, Ostella never had stepped foot in a sports car paddock before winning the classic endurance event in central Florida. Ostella, nicknamed "The Mechanical Bull" by the FOX broadcast team, immediately became a driver who could lay on the pressure when out on track while turning consistent laps. He also discovered a love and talent for endurance racing in the 12-hour race.

Young talent Ostella since has put a few more miles under his belt in the PC car, taking home a third-place finish at the Rolex 24 Hours of Daytona in January. After only 11 practice laps, Ostella drove the No. 38 Dash Neighborhoods / Phillips 66 PC car for more than five hours of the 24-hour race at Daytona International Speedway.

Daytona1But the Rolex 24 in January 2014 at Daytona and the Twelve Hours of Sebring in March 2013 at Sebring are the only two races in which Ostella has driven a PC car. He drove a Porsche GT3 Cup 911 for most of the 2013 race season in a series in his native Canada and the United States.

Ostella comes to Sebring - a track he loves and where he has enjoyed success - with raised confidence and high expectations. A two-year contract recently signed with Performance Tech Motorsports also has Ostella in an exceptional mood.

"Last year was a bit like Daytona this year: The deal was last-minute, and we were still working on my deal with SpeedMerchants," Ostella said. "It's nice knowing where I'm going to be at the end of this race. I can focus on my on-track abilities and focus on getting the team where we need to be. Being on my favorite track definitely helps keep me excited. It lets me focus on making sure we have the right setup so that (teammate) Charlie (Shears) is comfortable in the car so we can all focus on performance."