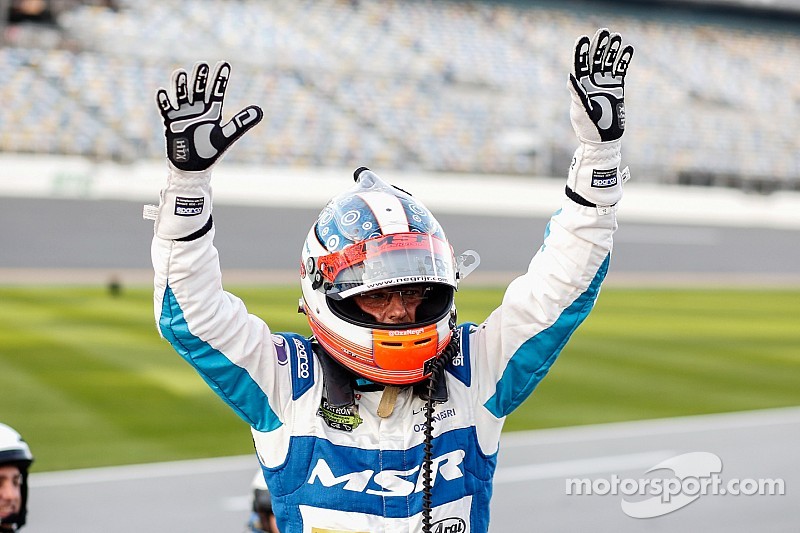 Michael Shank Racing has a perfect weekend going three sessions into it at Daytona.

After topping the charts in both practice sessions earlier today, Oswaldo Negri took the Michael Shank Racing Ligier and put it on pole for the 2015 Rolex 24 Hours at Daytona. Just one tenth back was Ganassi's star driver Scott Pruett, who led Scott Dixon in the sister car by a mere two hundredths.

"We're still learning the car," Negri said of the Ligier. Every time you get more out of it, you want more and new limits show up. Everything went well and I knew the DPs would get pretty close, especially with the cooler temperatures. I honestly got everything I could out of the car ... Really, really happy. I had a few moments in the bus stop where I think we were close to not having a race car anymore.
Ozz admitted though, "The pole position for a 24 hour race is more for bragging rights. I have a great team, chassis, engine behind me .... and great tires."

The MSR team goes into the 53rd running of the Rolex 24 looking for their second overall victory in four years. A.J. Allmendinger, John Pew, and the young Matt McMurry will co-drive with Ozz this weekend.

Defending race winners Action Express Racing will roll off in the fourth position, followed by the DeltaWing, which had a strong showing. The top six drivers were all within half a second of each other with DPs, P2s, and as just stated, even the DeltaWing in that group.

There were no major incidents to report during the prototype qualifying session.