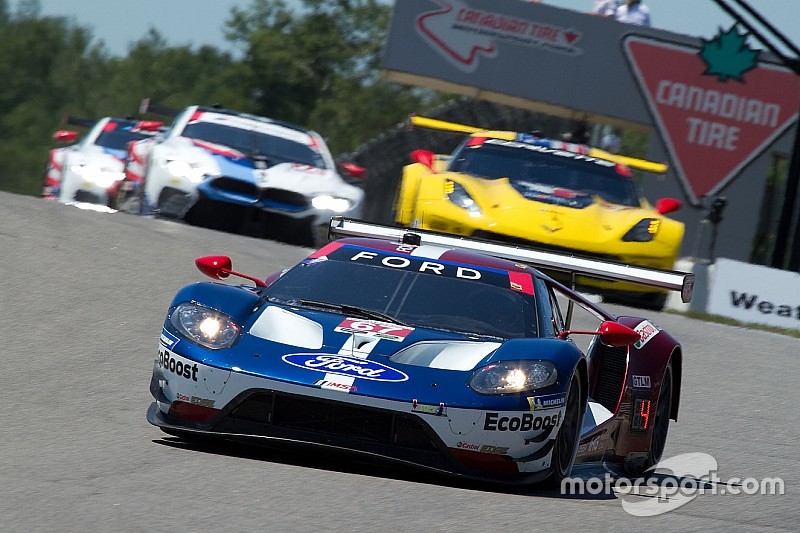 After the race, Westbrook’s teammate Ryan Briscoe admitted he was “in shock” after their win, which hinged on a full-course yellow with 20 minutes remaining.

Their #67 Ford GT had stayed on track while rivals made their final pitstops earlier, and a two-tire stop for used rubber – just seconds before the yellow was thrown – meant Westbrook emerged in the lead. Despite rear-end damage sustained in an earlier clash with the erstwhile class-leading Porsche 911, he brought home an unlikely victory over the Chevrolet Corvettes.

“You never stop believing,” said Westbrook. “We really improved the car after first practice [but] it was a real handful. And at period of times during the race, it was still a handful – it was a struggle all weekend.

“But when the guys gave me some clear track, I managed to clean up the tires [from rubber pickup] and the pace wasn’t too bad. The team did a great job adjusting tire pressures. That’s what you expect from Ford CGR.

“The car got better as the fuel went down. They decided to leave me out, which was a really good call and we got a safety car at the end, which was good. We were definitely on for a podium, but that safety car gave us the win.

“They just did a great call, so this goes to the team and my fantastic teammate giving us a chance by putting it on the front row, which was definitely overachieving. It just gives us great confidence knowing we can win in this way. It’s just great to be part of.”

Briscoe, who dropped from second to fourth in the opening stages, added: “I didn’t see that coming, especially after the first stint. The car was a real handful.

“We made adjustments with the tire pressures and ran the absolute perfect strategy, got Rick in and he just drove masterfully. We caught the yellow at the end, saw that happening and dove in the pits and came out with the lead.”

Taylor: Losing CTMP victory to CORE LMP2 “out of our control”