Patrick Dempsey to team with Andrew Davis in 2014 GTD

Dempsey and Davis (pictured) will be joined by Joe Foster and one additional driver for the Rolex 24 at Daytona, January 23 – 26, while the No. 28 Dempsey Racing/Konrad Motorsport Porsche 911 GT America will be co-driven by Christian Engelhart, Rolf Ineichen, Lance Willsey, Klaus Bachler and team owner Franz Konrad at the Daytona opener.

“Driving the full season with Andrew as my teammate is fantastic,” said Dempsey, the popular Hollywood actor who is also a lead driver and owner of Dempsey Racing. “He is truly one of the good guys in the paddock and we learned working with him last year that he is also one of the fastest on the track too, and very experienced in Porsches. We are heading into this season with high expectations.” 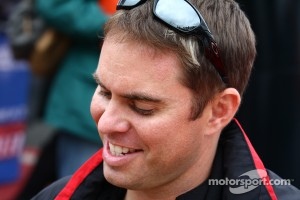 Foster, Dempsey’s longtime teammate and motorsports business partner, will join the No. 27 team for Daytona and the year’s other endurance races. Foster also led Dempsey Racing’s efforts in establishing the technical partnership with Konrad Motorsport, a top European sports car racing team that also has extensive experience in the Rolex 24.

“Our technical partnership with Konrad Motorsport is an ideal situation for all of us,” Foster said. “They bring a strong amount of recent experience with this particular model of 911 GT race car and also have a great relationship on all levels with Porsche.”

Bachler is a young factory Porsche Junior driver from Austria who has recent experience in the Porsche Mobil 1 Supercup. Engelhart is an equally talented German who races with Konrad Motorsport in Porsche Mobil 1 Supercup while Ineichen is also a Konrad team fixture as the reigning B-class Champion in the German Porsche Carrera Cup, a series in which Engelhart finished second in the main driver championship last year.

Willsey is an American who tested at Daytona with Konrad in November and brings solid Porsche 911 GT3 racing experience to the team. Team owner and driver Konrad is also among the fastest veterans competing today and has more starts in the Rolex 24 than any driver on the team.

This season marks the first of a two year promotional and brand cooperation relationship between Porsche and Dempsey Racing, and the team’s second year of racing exclusively with Porsche. As full-season Porsche competitors in ALMS GTC last year, Dempsey and Foster partnered with Andy Lally in finishing second in the season-ending Petit Le Mans in October. The season-best runner-up placing matched a second-place finish by Dempsey and Lally at Mazda Raceway Laguna Seca in May and the duo also reached the podium at Circuit of The Americas in Texas in September with a third-place showing.

“Last year was a great first season with Porsche, in ALMS and with our fourth-place GTE-AM finish at Le Mans,” Dempsey. “In many ways, it was our most successful season ever and we have every reason to believe that will continue, certainly, as something to build on this season, especially with Andrew on the team.”

Davis co-drove to the 2011 GRAND-AM Rolex Sports Car Series GT Championship in a Porsche and won the pole at the following year’s 50th Anniversary Rolex 24 At Daytona in which he and his teammates finished third.

“I am absolutely thrilled to be driving with Patrick and Dempsey Racing for the 2014 IMSA TUDOR United SportsCar Championship,” Davis said. “The Dempsey Racing crew is comprised of some of the best personnel in the business and our new Porsche 911 GT America is going to be strong. Additionally, the technical partnership with Konrad Motorsport will further strengthen the program.”

The fourth Rolex 24 driver for the No. 27 entry and the full-season co-drivers for the No. 28 Dempsey/Konrad entry will be announced in the near future.

Next up for Dempsey Racing is this weekend’s Roar Before the Rolex 24 At Daytona three-day test, January 3 – 5. The IMSA TUDOR United SportsCar Championship returns to Daytona later in January for the season-opening Rolex 24 At Daytona, January 23 – 26.

Corvette DPs at Daytona: ’Roar’ out of the gates for 2014