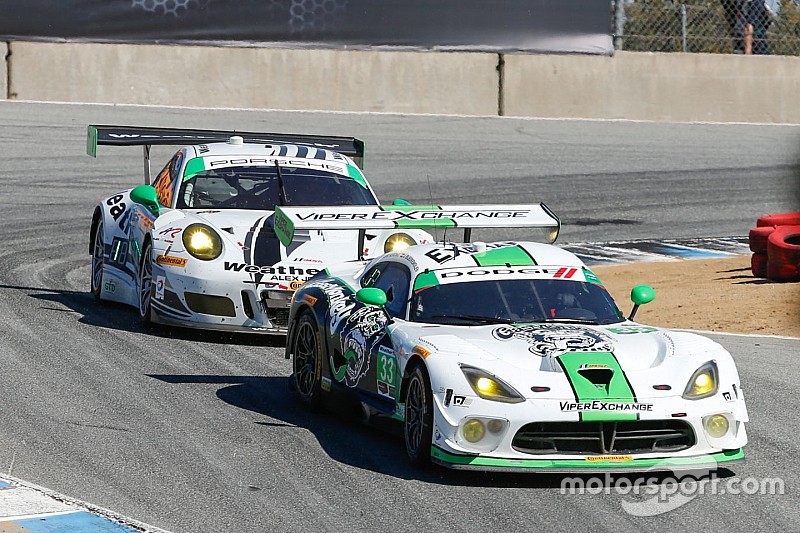 Monterey, California (May 1, 2016) – A perfect pit stop at the halfway point of the Continental Tire Monterey Grand Prix by the Riley Motorsports crew propelled the No. 33 ViperExchange.com/ Gas Monkey Garage Dodge Viper GT3-R and drivers Ben Keating and Jeroen Bleekemolen to a season-best sixth-place finish Sunday at Laguna Seca.

After struggling to find a setup for the notoriously slick 2.238 Laguna Seca circuit all weekend, the No. 33 team instead found a way to improve track position in the pits.

Starting driver Keating didn’t have the pace to crack the top-12 in his race-opening stint but the Riley Motorsports crew did when the No. 33 pitted for its only stop of the race exactly 58 minutes into the two-hour sprint.

This was really the best we could do with the car right now.

“What I can say is we didn't have a sixth place car, so I'm excited to make it up to sixth place,” Keating said. “I'm really proud of the guys, the Riley Motorsports team, all of those positions were made up in the pits. They were all made up in our single pit stop.”

Bleekemolen took over for Keating and was hustled back into the race by the Riley Motorsports crew in sixth place, a position he would defend and hold to the checkered flag.

“I'm pretty proud of the race we did,” Bleekemolen said. “There were several cars faster this weekend, but with great strategy, a good opening stint, a good pit stop and a good run to the finish, we got the maximum out of it today. The absolute maximum, we couldn't have done anything more.”

ViperExchange.com finished 10th in the season-opening Rolex 24 At Daytona and 12th one race ago at the 12 Hours of Sebring, rebounding from contact and mechanical issues in both races.

“We didn't make a single mistake today,” Bleekemolen said. “This was really the best we could do with the car right now. We've just got to make sure we're better next time in terms of grip. We gave it our all and at least it is good points.”

Next up for ViperExchange.com and the IMSA WeatherTech SportsCar Championship is the Sports Car Classic on the Raceway at Belle Isle Park in Detroit, June 3 – 4.

A disappointing race for BMW Team RLL at Laguna Seca